Catacombs is a daily dungeon-like Trial which unlocks at Player Level 26. You can do two runs (or 3 for Monthly Pack Subscribers) every day to win Fallen Angels embryos. Catacombs are refreshed at midnight UTC. Tap the "Trials" Icon to enter the "Catacombs" screen.

Prior to entering the Catacombs, you must select 5 to 10 Food Souls. You will only be allowed to build your team of 5 for battle in Catacombs using these Food Souls. Any of your Food Souls can be selected, regardless of whether they are busy. 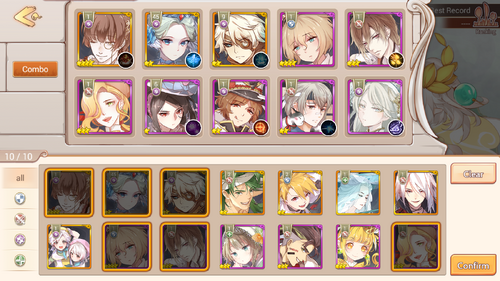 Stages in Catacombs are split into sets of 5, where the 5th stage will be a boss fight.

Prior to entering a set of stages, you may choose to sign contracts. Contracts will increase the difficulty for the following set but will also net greater rewards.

The contract will be nulled at the end of a set and will have to be reselected for the next.

During battle, Food Souls need to defeat the enemy within the given time. If time runs out or all Food Souls are killed, it will be considered a defeat. You can revive your team with Magic Crystals when all your Food Souls were killed. The status of enemies will not be reset.

You have the option to abandon a Catacombs run at any time. Records will still be taken if you choose to abandon. At the end of a week, all ongoing runs will be ended.

This page documents the Fallen Angels you can encounter as you progress through Catacombs, focusing on Normal, Enhanced and Special Enhanced ones.

The most commonly used talents in the Catacombs are:

Overall Blade Chop is fantastic for newer players as % dmg isn't nearly as useful with FAs having little health. However at mid to late game, Blade Chop should be switched out for one of it's alternatives. Grilled Purgatory deals the most damage however Super Dark Cuisine can make dealing more damage easier with the def decrease.

The seasoning support talents are the most essential ones for catacombs. All 3 have their particular uses, as while Seasoning heals less, it also has the shortest cooldown time, allowing for spammability. Melt and Mold looks nice but is largely useless.

The control talents are the ones you can get away the most with neglecting, as there isn't much use for them except for niche cases such as Oysters event. Restore Energy and Powerful Cleansing are the most notable, as Restore energy allows you to spam the energy skill and Powerful Cleansing can be used in higher level Catacomb bosses like Leafy Sea Queen or Thundaruda who both have invulnerability. Holy Mushroom can be used early game when you crowd control units aren't fast enough to regularly prevent attacks.