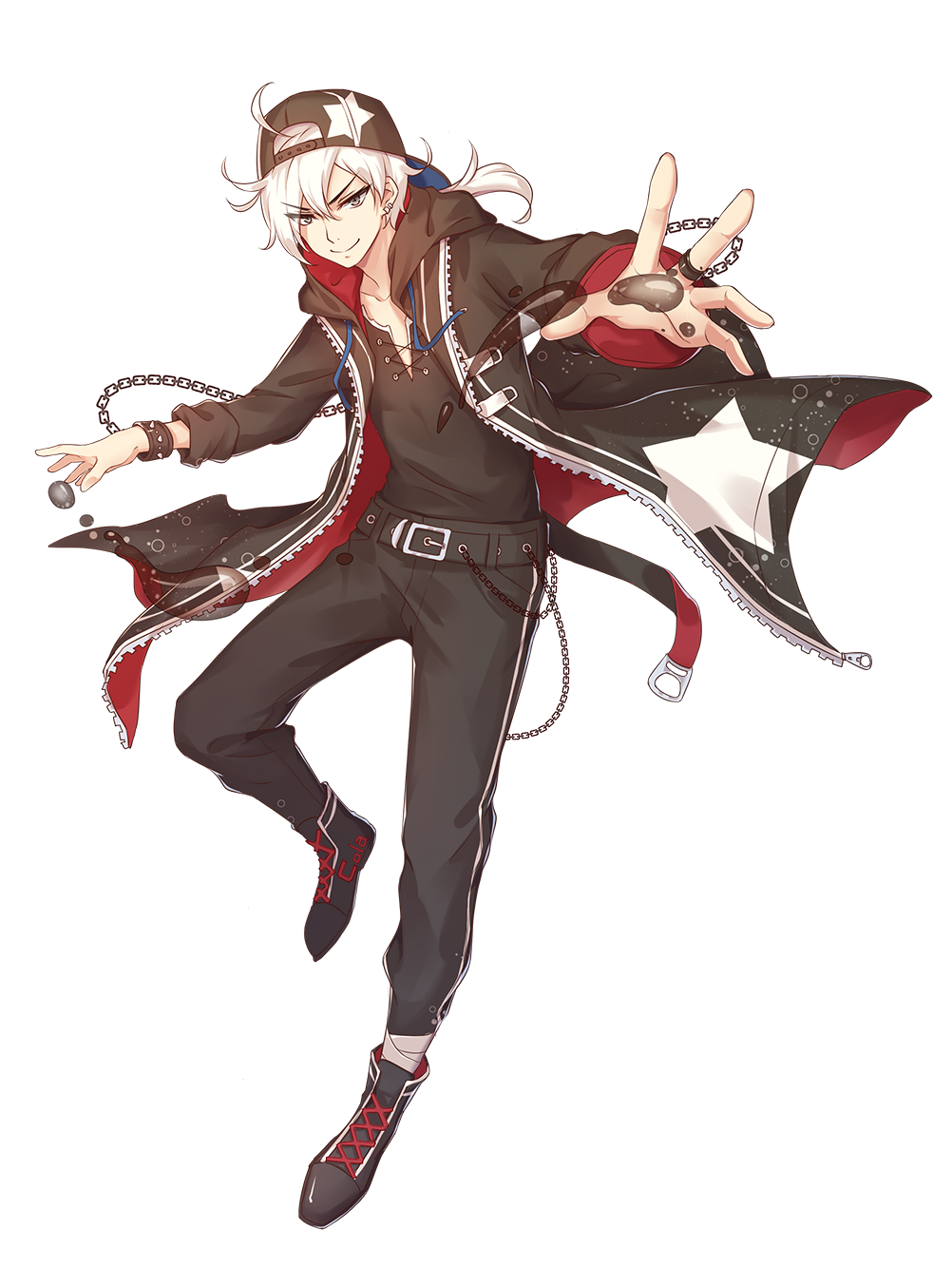 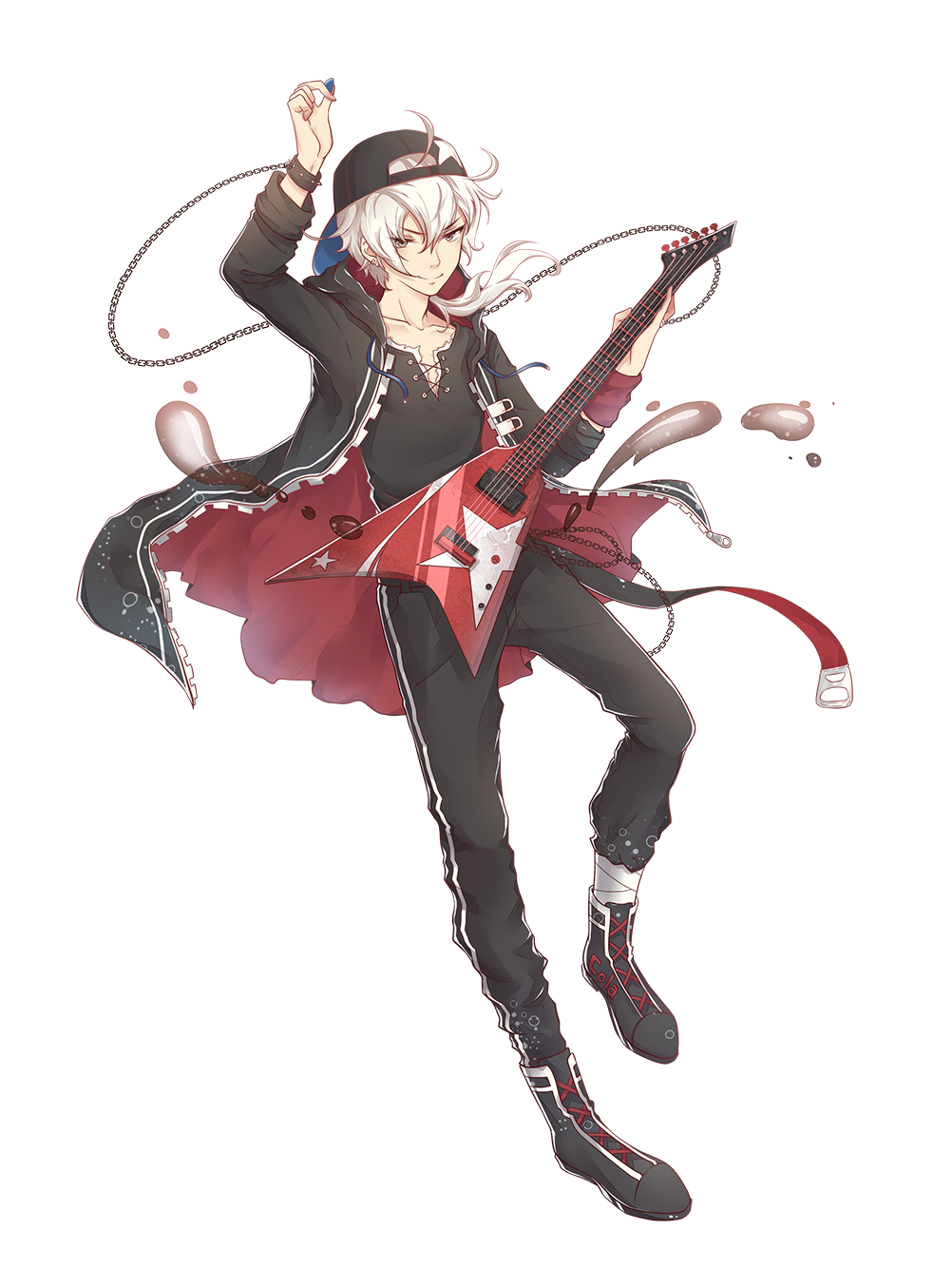 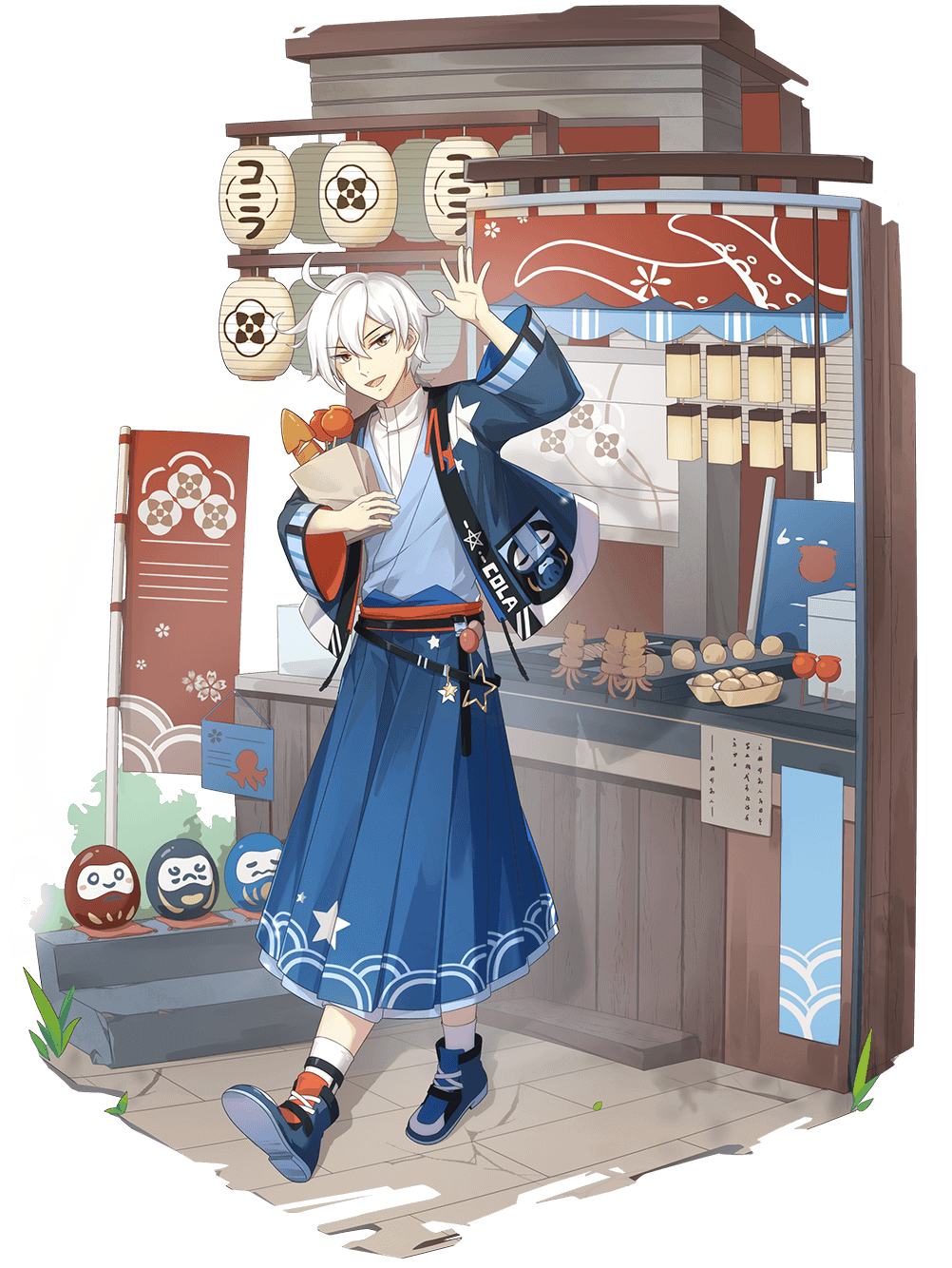 A young kid with a lot of personality. He is an advocate of freedom and is a very loyal companion. He adores music; especially rock and rap.

Cola is beloved by young people around the world. It's not only refreshing but also a great drink to use for cooking! 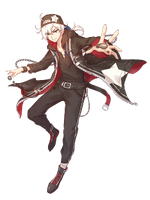 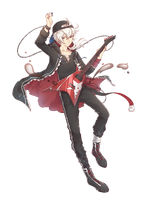 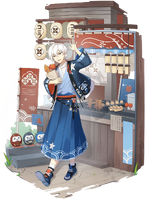 The political center of Gloriville.

As the most fertile area on the Knowles continent, connecting the north and south seas, Gloriville has always been a place known for its prosperity.

This is especially true for Gloriville's capital, Midgar.

Passing through the city gate, the bustling scene of people came into the eye, and the ubiquitous peddling announced the prosperity of this place to the outsiders.

A whisper sounded beside my ears, and swept forward, not yet smaller, but gradually enlarged.

Hamburger stepped on his skateboard and skated around me.

"Did you see that? It feels so good to break through!"

Hamburger pulled his skateboard to his feet, his face full of excitement. "Midgar is really amazing."

Alas...I hope he doesn't become too excited that he forgets our business here.

"One week later, we're going to participate in the National Performance Contest, so, you can't forget." And Hamburger packed up his luggage in the hotel room, and I watched him happily moved around. I couldn't help but yell again.

"Alright," Hamburger heard me for a little bit, and then he seemed to suddenly thought of something. "But on the way, I heard people say that the audition was three days later? Have you got the time wrong?"

"... " Hamburger's question stabbed me in the heart. A few fragments of memory flashed through my mind. I said after a moment of silence. "No, we can go straight to the main event. "

"Aha! Is that so?" Hamburger nodded without a doubt. He didn't notice my abnormality, and then he looked forward to it. "Then can I go shopping today?"

"I've never been to such a big place, please! I'll have a good rehearsal starting tomorrow."

By the station's window, looking at Hamburger's back, I held my hand tightly.

Inexplicable emotions came to my mind.

"It's like the wind blowing through the ocean, and the setting sun sinking in the East Mountain. "

"The south is desolate, the peacock's plume is shining in all directions."

A gentle melody with a sense of serenity.

Heroic singing of the vicissitudes of life.

Midgar's streets are packed with performers from all over the world.

This is the charm of the National Performance Competition.

Because of such a grand event, people will climb mountains and wade through rivers to come here, and they will shine on the stage to prove themselves.

Carrying the instrument case on my back, I look left and right in the crowd.

My eyes drifted away and I muttered subconsciously.

"Where are you?" I squeezed across the street, and I kept looking for the figure in my memories.

Like an electric shock, I turned to face the direction of the piano's sound and rushed into the surging crowd.

Pushing away from the last row of the crowd, I gasped and squeezed into the inner circle.

Long hair flying in the air.

"Qin..." I was about to speak, but I was interrupted by the next sound.

"The river is roaring, free and content, and the world is..." Then I noticed that at this moment, a strange young man was standing beside her.

I put down my outstretched hand and swallowed all the words back into my mouth.

It's exactly the same.

Looking at the two people in front of me, time seemed to return to the past.

On the eve of the last National Performance Contest, the streets of Midgar.

"Release the restraints, let go of repression. Look at me."

"Learn to be yourself!"

Holding the electric guitar, I was singing and dancing in the street in an almost crazy posture.

This was my first visit to Midgar, and I was directed at a paper flyer for the National Performance Competition.

It has become a paradise for performers.

Countless musicians gathered, and the streets were full of music.

Affected by this atmosphere, my performance was more diligent than usual.

I have studied music for a long time, but this was my first time to perform on such a lively stage.

With excitement in mind, I sang and danced in the streets of Midgar for several days.

To my surprise and amazement, I seemed to be one of the most popular performers in this area.

The other was a girl who purely played the electronic piano.

It's as if music makes us feel connected, and our performances echo each other across a road.

Then one day, the girl came to me.

She extended a hand to me.

"Work together? At the show."

I accepted her invitation.

Two days before the match, Qin Ying and I rehearsed in our residence.

The number of performers in the streets began to decrease, and everyone was busy practicing in order to get good results.

After the song was over, Qin Ying rubbed her fingers and said to me helplessly.

"Then you can relax your tune?"

"Relaxing cooperation will be very crude. "

"But, I don't want to do that, music is freedom, why care about so many rules and regulations, why? "

"Partners shouldn't be shackled to music, it's foolish."

"We will be eliminated directly if you do so."

"Believe me, our strength will not. "

A few days ago, the passers-by's popularity made me forget myself.

Without considering her mood at all, I rejected Qin Ying's suggestion with a very stubborn attitude.

Then we stood on the stage and initially defeated several opponents.

Just when I was proud to show off my correctness to Qin Ying.

"With rough cooperation and complete disconnection, Group B, Qin Ying and Cola were eliminated. " One sentence from the judges sent me to hell.

After the match, I couldn't accept the results for a while, and I vented my anger to everything around me.

"Cola, you don't have a sense of teamwork at all. You don't think about the feelings of your teammates."

My ridiculous anger had hurt Qin Ying. She said this sentence and left.

I shook my head and flung myself from my memories.

I watched the performance of the two quietly.

Excellent...No, it's close to perfection.

Sure enough, am I holding back?

When I think about it, my mouth became a little bitter.

But soon I adjusted my thoughts, took a deep breath, and prepared to step forward and apologize.

Ever since she left, I calm down, and whenever I think of it, I feel guilty.

After the performance, I came to Qin Ying.

Qin Ying's expression faded and she shook her head. She didn't respond to my apology, but turned away from the topic.

"Are you still alone?"

After saying this to me, Qin Ying left with her companion.

See you in the competition...Sure enough, do you still blame me?

Looking at their backs, I took a deep breath.

Half a month later, the National Performance Competition.

"Finals, Group A, Hamburger, Cola. Group B, Qin Ying, Sugi Masa, please take the stage on both sides." The judges announced the start of the final battle.

Looking at the two of them, some bad memories blurred my eyes.

"Cola, are you okay?" Hamburger noticed my abnormality.

"It's nothing..." Taking a deep breath, I said to Hamburger every word. "Hamburger, we want to win."

The whole process was intense and long-lasting.

The two sides performed a total of ten tracks.

Alternating without a pause.

We set everyone's mood on fire, and the atmosphere of the stadium is at its climax.

In the end...the judges solemnly announced the results.

"Group A has 571 points and Group B has 565 points. Congratulations to Cola and Hamburger for winning the championship of the National Perfomance!"

"Cola, we won! Win!!!!" Hamburger hugged me excitedly and jumped up and down.

Wake up one night, change one year.

I'm different from before.

Did you see that, Qin Ying?

Looking up, I looked to the opposite side, trying to see her expression now.

But I didn't expect her to come to me calmly.

"...You...Don't you still blame me?" I was at a loss in the face of her congratulations.

"I never complained to you. It was just a moment of anger."

"You're a genius, Cola, but you don't know how to cooperate, and you don't care about the existence of your companions, which is doomed to go far. "

"I'm glad to see your change."

"You and your partner have transcended our past on stage, which is the best apology to me."

"I accepted." Qin Ying said with a happy smile and stretched out her hand to shake mine. ''So... "

The annual publicity time starts with the early wind, and finally thundercloud.

So at the end of the day, Gloriville's port will become more lively than usual, and more foreigners will flow into Midgar.

This habit has been going on for many years.

At this time of the year, there are usually quiet new stars in Gloriville.

Conquer people from all over the world with their own charm.

Each year has its own highlights.

Among them, the most interesting one is a teenager named Cola, who was famous in the past two years.

He could have even taken two titles, or even three in a row to create a dynasty.

However, when he first arrived, he was blinded by the short-term success.

In the end, it ended in failure.

But he wasn't discouraged.

Since that failure, Cola has traveled around the world.

He calmed down to study music, also lowered his posture, and he began to try to learn how to cooperate with others.

Eventually, he found a new partner in a small town in Gloriville.

In the new year, the entire Midgar exploded with people.

Countless people questioned his successful experience and wanted to replicate it.

However, Cola just left a word that was difficult to understand.

"I have never been successful, success is us.''

Three days after the competition, somewhere in a hotel in Gloriville.

Cola and Hamburger stood in front of a man with two horns.

"In other words, I spent so little money to get a championship combination?"

"I am flattered." Cola shrugged, and said casually. "So where do you need us to perform, Steak?"