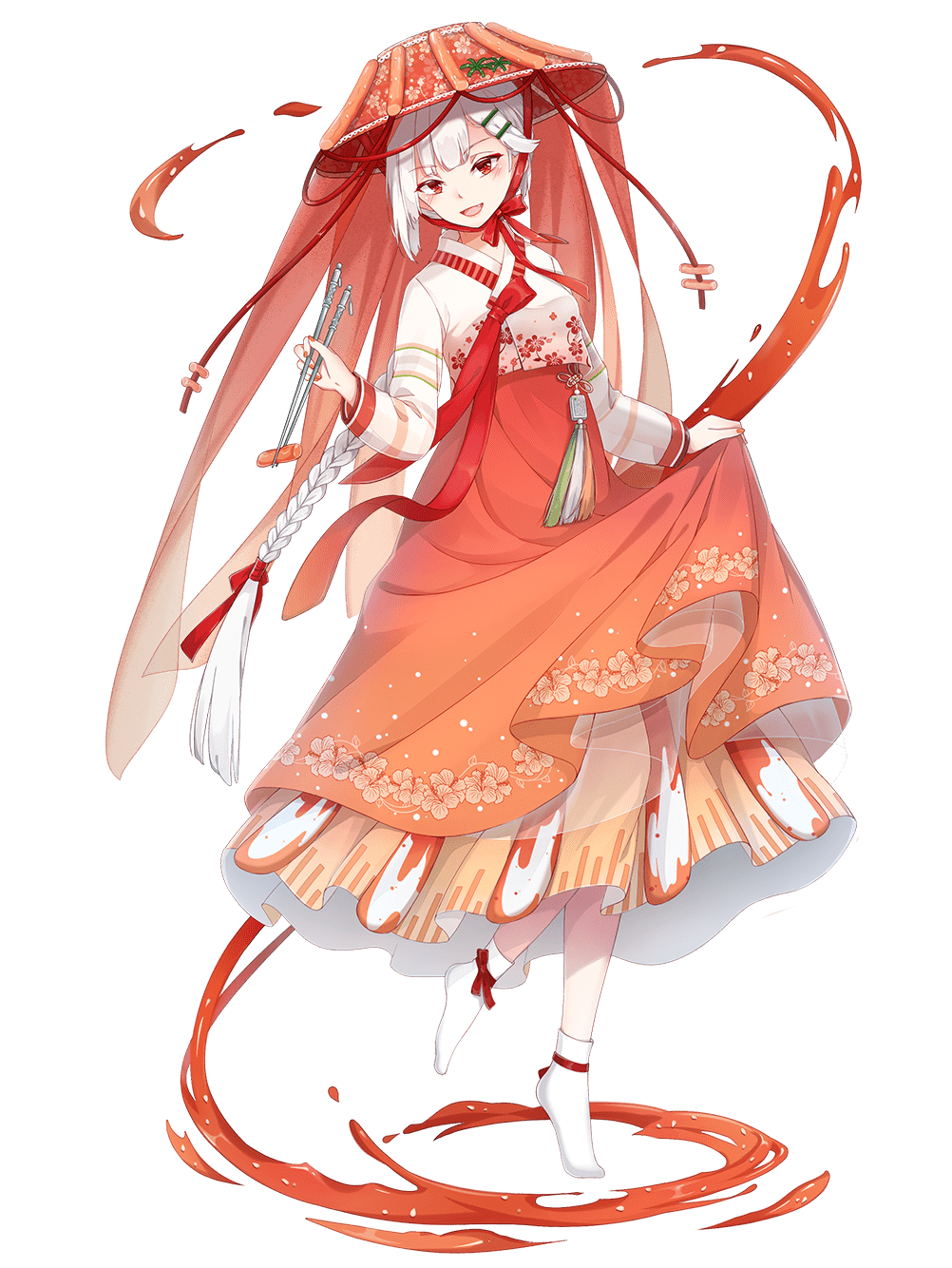 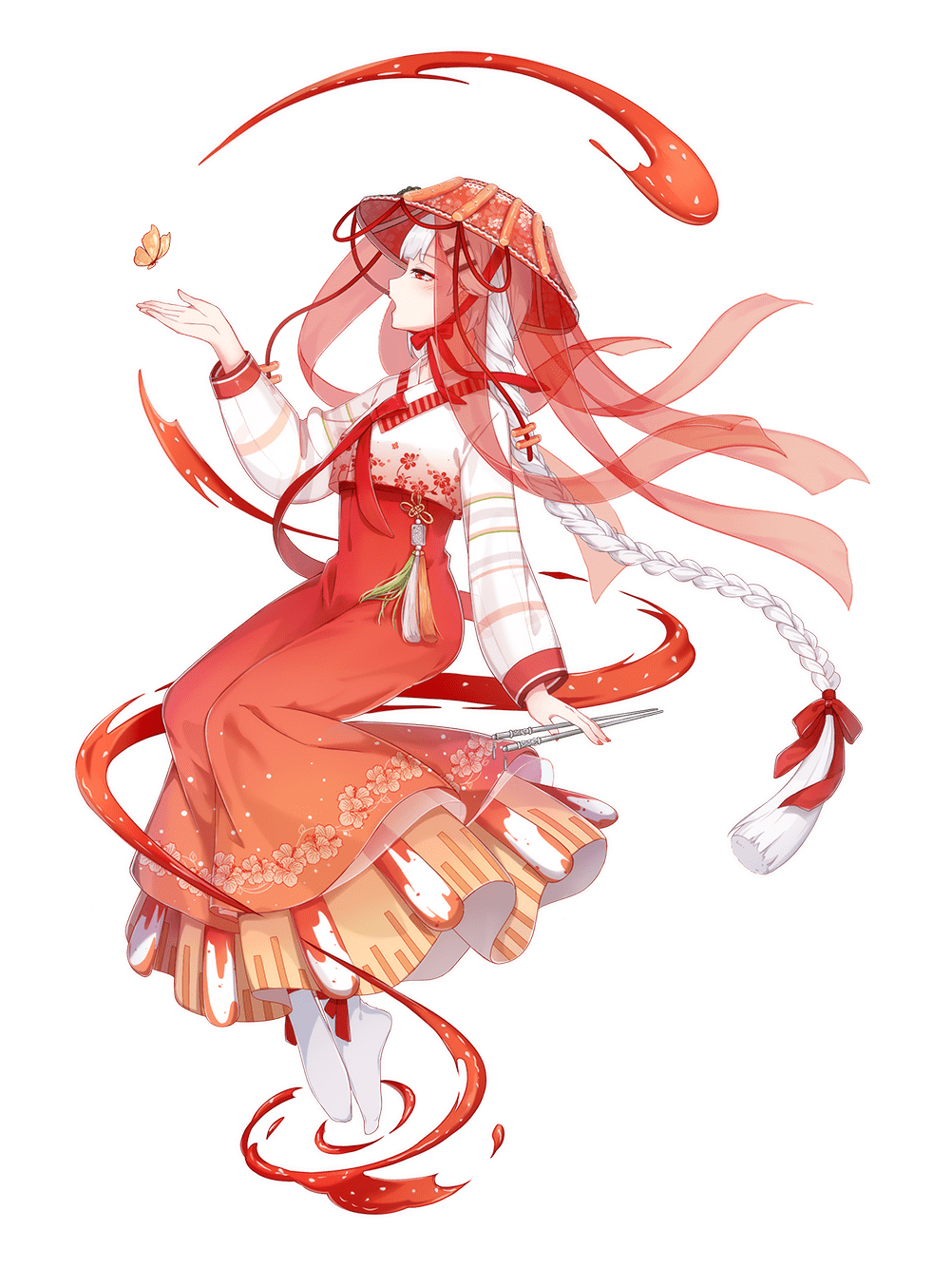 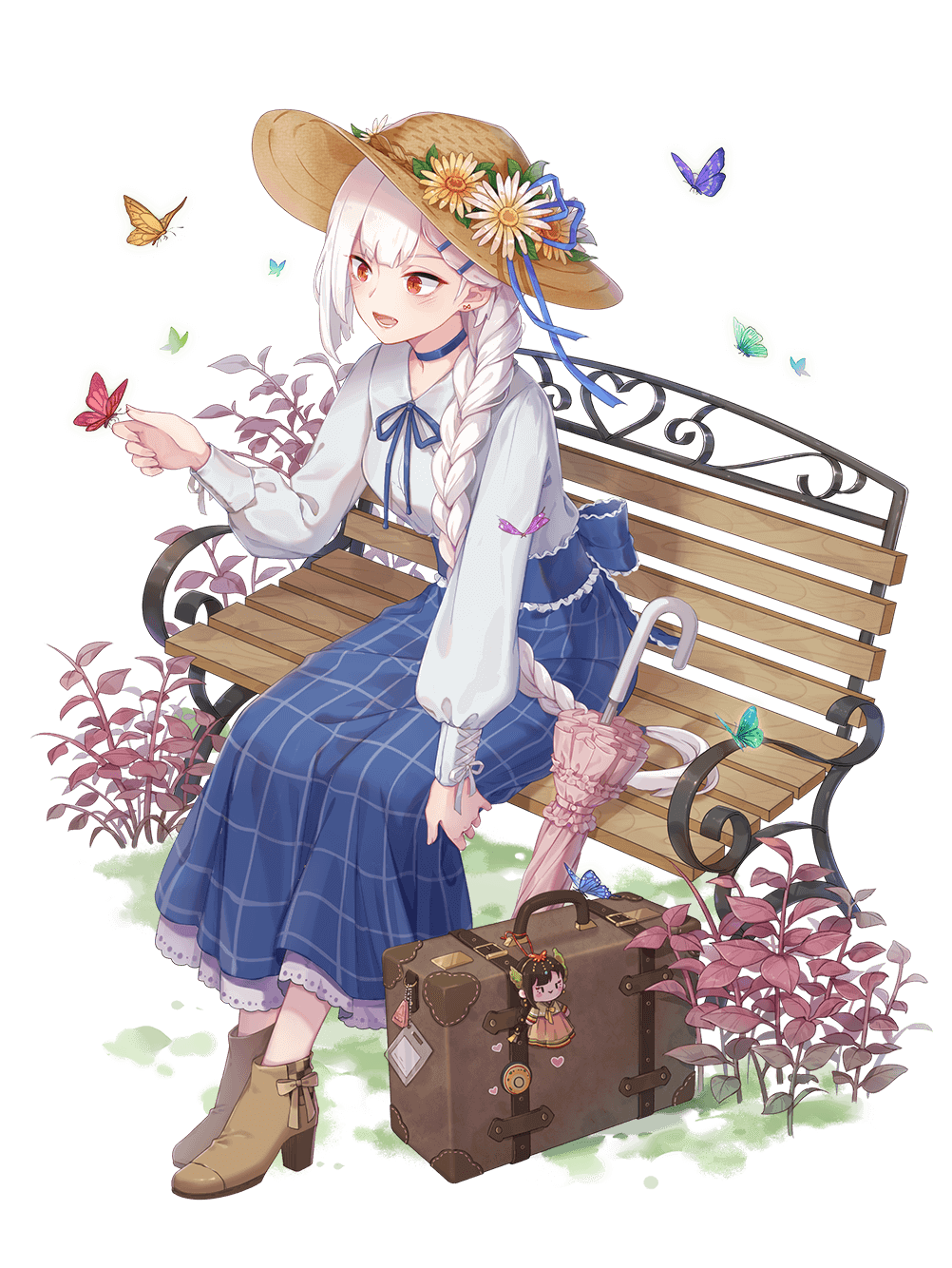 Kimchi's younger sister, a traveling artist skilled at singing. She seems tenacious, but actually she's got a gentle heart. Her easily-moved personality is the reason why her sister often calls her a "cry baby". She doesn't want her sister to dance to the voice of another singer, so every day she works on her singing, and subconsciously she sees anyone with a good singing voice as her competition.

Previously a royal cuisine, in modern times Ddeokbokki has had some improvements. With the addition of new ingredients, it has turned into a dish with a real kick to it, helping it gain widespread appeal. 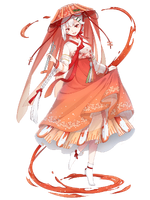 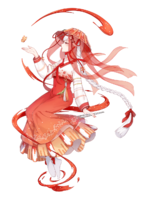 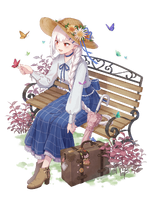 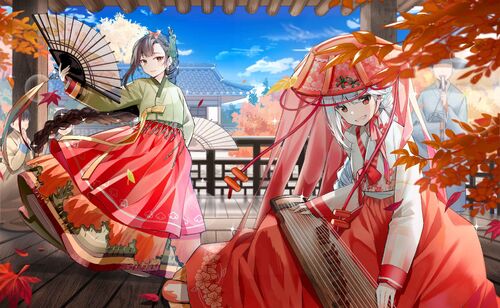 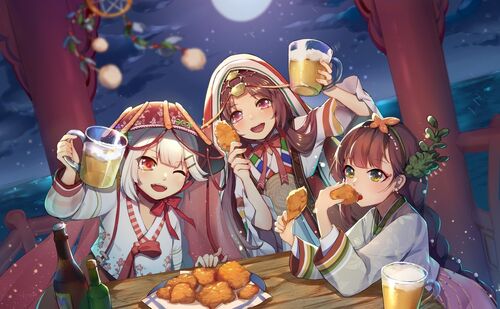 The drumbeat crescendoed as she fluttered into dance, long sleeves waving behind her.

Her robes flowed with her lithe steps.

As if she was composing poetry with her body, her movements were mesmerizingly beautiful.

As expected, my older sister’s prelude never ceased to be captivating, no matter how many times I’ve seen it.

Idly I thought, as I cleared my throat and sang to the tempo.

“Do you have a sorrowful tale?”

“If so, try letting go and dancing.”

“Do you tear up at memories you retell?”

“Leave your sadness and regret behind right now~”

Under azure skies, my sister and I performed all we wanted, all we wished.

The song concluded as I sat down to rest, leaned against my older sister.

“Where are we going next, big sis~” I hummed with curiosity as I swayed my legs.

“...Southwards,” my older sister, fingertips rapping on a drum, said after a moment silent in thought. Right after, she got up. “Get up, Ddeok, I just thought up a new dance move.”

“Huh? Oh! Okay~” Not really following my older sister’s train of thought, I got up hurriedly and cleared my throat in preparation to sing.

The drumbeat began once more as my song and my older sister’s dance burst into life on the plains.

Roaming the lands with our neverending song and dance, that is our lifestyle, our every day.

My older sister’s dancing was the best, not even the best dancers in the world could hold a candle to her.

As her companion and songstress all this time, I was certain of this fact.

However, it’s precisely due to her perfection that…

“Ah——Ah——Cough——” I braced myself against the table and coughed lightly, my pained expression reflected in the mirror.

Because of my distracting thoughts, I made a mistake in my singing.

I reached for my honey water and took small sips.

“It’s so hard…” I mumbled to my reflection dejectedly, hands cupping my chin.

I’ve noticed a problem that without my realizing, a rift had opened between my song and my older sister’s dance.

I tilted my head to gaze outside where my sister was practicing her dance in the courtyard, and couldn’t help but let out a sigh.

“Ddeok… Something on your mind?” My sister asked after concluding a performance, patting my head with concern, worry in her eyes.

“...No...I’m fine~” I was dumbfounded for a moment before I changed the subject.

I didn’t want to make my sister worry, nor cause her trouble.

Returning to my room, I clenched my fist in front of the mirror, cheering myself on.

“Train harder! You can do it! You can catch up to big sis!”

I began practicing my singing without my sister’s knowing, when she wasn’t paying attention.

Even though it was tiring, every time I thought that my sister wouldn’t be able to dance to her heart’s content to pace herself with my singing, I was saddened.

It shouldn’t be that way.

Hard work paid off, and the results of my many days and nights of practice came to fruition.

That day, my sister and I were performing impromptu at the plaza of a town.

This time, my sister’s movements were much more fluid and dynamic. Even though I knew this was far from her full potential, I was somewhat relieved.

The people in the audience increased gradually and feeling their gazes on my sister, my song grew happier.

I said from the bottom of my heart.

At the end of the performance, I couldn’t wait to share my improvement and delight with my sister, to tell her that her little sister has been working hard.

But as I arrived at the break room, I stopped myself.

My older sister was talking to a male stranger.

From where I was, I caught snippets of the conversation.

Hearing that, my heart caught in my throat.

I’ve been abandoned by my sister.

With conflicting feelings, I ran back to our lodging dejectedly and feeling betrayed.

I lay on my bed, face buried in my pillow.

The man’s face couldn’t leave my mind as I grit my teeth.

“You stole big sis from me, don’t think I won’t remember that.”

“Hello, Ddeok, I’m Zhengyang.” The man stepped out from behind my sister and waved at me with a polite facade.

As expected, the man followed my sister here, and even put on an act, like I wouldn’t know.

“...Hmph!” I complained silently as I accepted his handshake with a cold groan.

“Uh…” Zhengyang was struck dumb for a moment and stood still awkwardly at a loss.

I turned up my mouth and ran back to my room, leaving behind the dumbfounded man and my dazed sister.

Bringing the guy home, is my sister acknowledging that he’s better than me too?

I hid in my room, sulking in a corner with my knees tucked in.

The next morning, I got to the practice venue early.

Only to see my sister and that annoying guy walk in chatting it up, all smiles.

Ugh… Making my shy and stoic sister smile like that…

I cursed him in my heart.

I’d never lose to the likes of him.

“I’ve… lost.” A single song determined it all. I looked at Zhengyang with my jaw dropped, speechless.

As much as I didn’t want to admit it, this guy was amazing.

At that moment, Zhengyang walked slowly towards me and said softly.

“Ddeok, what do you think of this? Would it be better to sing these parts of the third verse in a lower pitch?”

I glared at him, a flame igniting in me.

Just you wait! I’ll surpass you!

After the stigma of that morning, I crazedly practiced singing whenever I could.

I wanted to send a message to that guy that my position wasn’t so easy to steal.

That Zhengyang guy really is amazing.

The more I conversed with him, the clearer this became.

The singer for my older sister’s dancing can only be me!

One day, we received an invitation to perform at the plaza of a town.

The night before the show, I sang out loud in the privacy of my own room, and clenched my fist, looking at my reflection in the mirror.

For tomorrow’s performance, I will! I will, for sure, do better than him!

I wanted to tell my older sister that I was the only singer for her.

Under the anticipating gaze of the audience, Zhengyang and my sister stepped on stage as planned for the first performance, before the second performance by my sister and me.

The drumbeat crescendoed as Zhengyang bowed his head and sang.

His deep, rich voice had a strange charm to it that drew everyone’s attention instantly.

Long sleeves fluttering, my older sister spun into an elegant dance, steps matching the tempo of the rising and falling drumsticks in her hands.

“Over rivers and hills, over streams and fields.”

“Spring to fall how time flies, is the life of mayflies.”

“Down wine with a smile and sigh, wake with a gasp, a thought tells why…”

The performance was entrancing as the two figures melded into an intricate painting of a scene idyllic.

Seeing their perfect forms, pain struck my heart as an indescribable feeling bubbled up.

I want to go on stage…

The untimely thought crossed my mind.

I want to go on stage…

It was as if someone was whispering into my ear.

An unexpected flurry of footsteps rang out.

I stepped on stage.

In the middle of the performance, when it hasn’t ended.

Like an unwelcome visitor, I ripped apart the idyllic scene before me.

“Ddeok…” I heard my sister mutter.

“Love and hate in the now, days and months eternal…”

I slotted in perfectly.

Zhengyang flinched slightly, before backing off with a smile.

My sister reacted fast as well, continuing the performance after my unexpected appearance.

Unbelievably, though this daring interruption wasn’t planned, it brought the performance to a new high.

The song concluded, and after a moment of silence from the crowds, they burst into a thunderous display of cheers.

The performance was… very “successful”.

But the only ones who knew otherwise were us three.

With emotional turmoil, I looked over to my sister, unease and dread over my rash act, yet prideful over the groundbreaking performance.

I saw her eyes carrying the faintest hint of disapproval.

Hmph… Is it because I stole that guy’s spotlight? No matter, I’m better.

I thought as I stubbornly turned up my mouth to my sister, half in hurt and half in smugness.

Nobody stands a chance in stealing my position by my sister’s side!

There’s an interesting tale that comes from northern Light Kingdom.

A tale of two beautiful sisters who roamed the Light Kingdom borders as performers.

The younger sang and the older danced and combined, they received bouts of praise and got tipsy.

As time passed, the younger felt her song just weren’t as good as her sister’s dance anymore. In the blink of an eye, a rift had opened between the two.

This realization saddened the younger sister, and she practiced in private so she wouldn’t hold down the older sister.

For an older sister who loved her younger sister so, she would never have missed this in a million years.

While she was worried about her younger sister, she didn’t want to cut her hard work off short.

After seeing the sisters’ performance, the man took a liking to the younger sister’s singing and agreed to the older sister’s request——to train her in singing.

But by an unfortunate coincidence, the younger sister came to the misunderstanding that the man was a competitor here to replace her, and held hostility towards him.

And with misunderstandings on both sides, the two began their conversing and teaching.

Only when the entire incident, hilariously awkward as it was, had blown over did the truth come to light.

“So, you’re not here to steal my big sis from me?” Dubiously, Ddeokbokki asked Zhengyang.

“What was it you ‘liked’ the first time you met?” Ddeokbokki asked hesitantly.

“The first time… uh…” Zhengyang was deep in thought, before coming to a realization moments later. “Oh! I remember now… I was talking about how I liked your singing, so I agreed to help!”

“T-Then what was that about ‘I’ll sing’?” Ddeokbokki asked with disbelief instantly.

“I was saying I’ll teach you to sing!” Zhengyang was stuck between anger and amusement as he knocked Ddeokbokki’s head lightly. “Weird and childish just like a kid, even at your age…”

Ddeokbokki covered her head and stepped back in embarrassment.

Feeling hurt and relieved at the same time.

So long as big sis is mine.

Ddeokbokki thought as she wrapped her arms around Kimchi and didn’t let go, curling up in her sister’s lap like a pet fishing for treats.