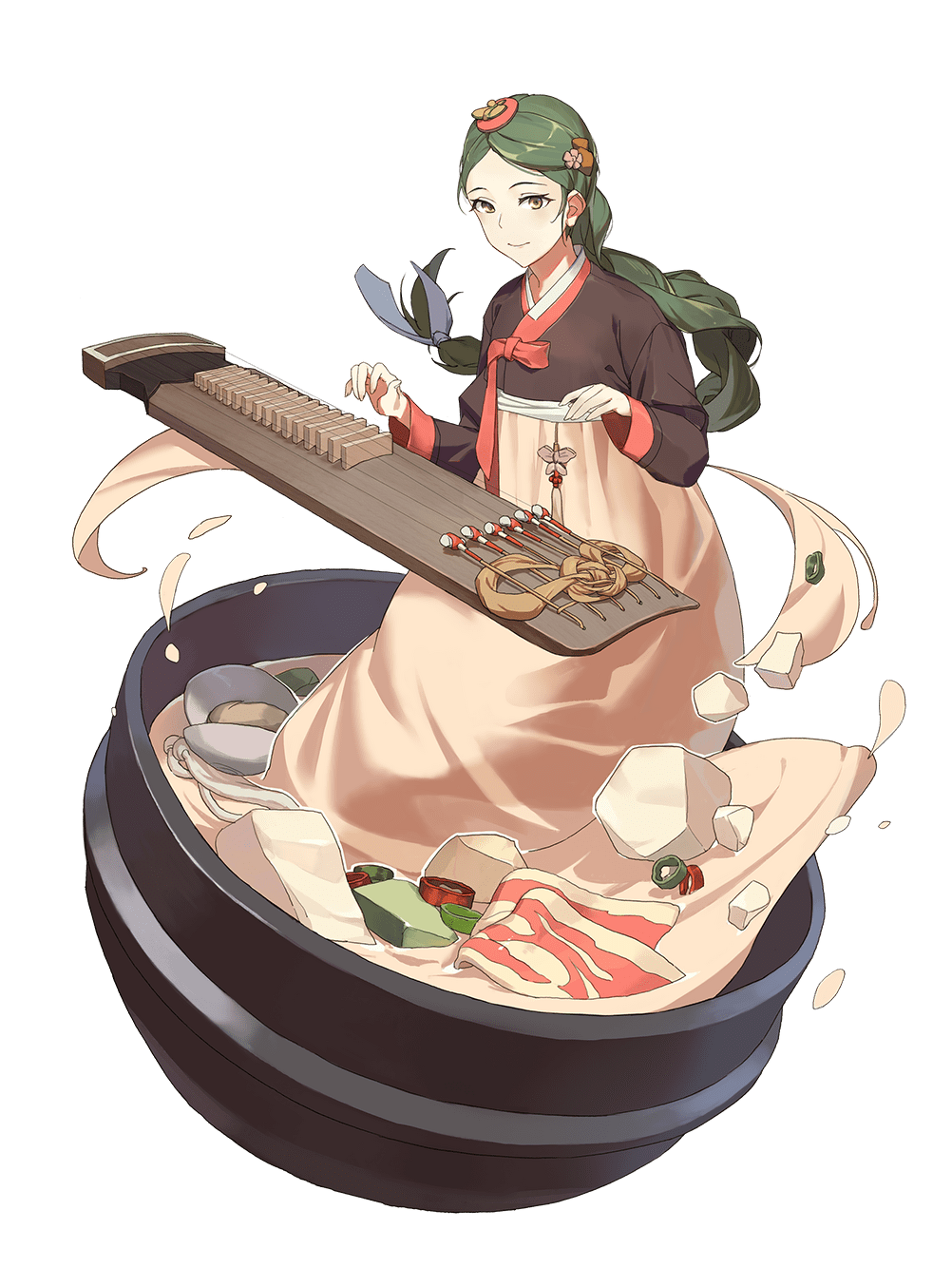 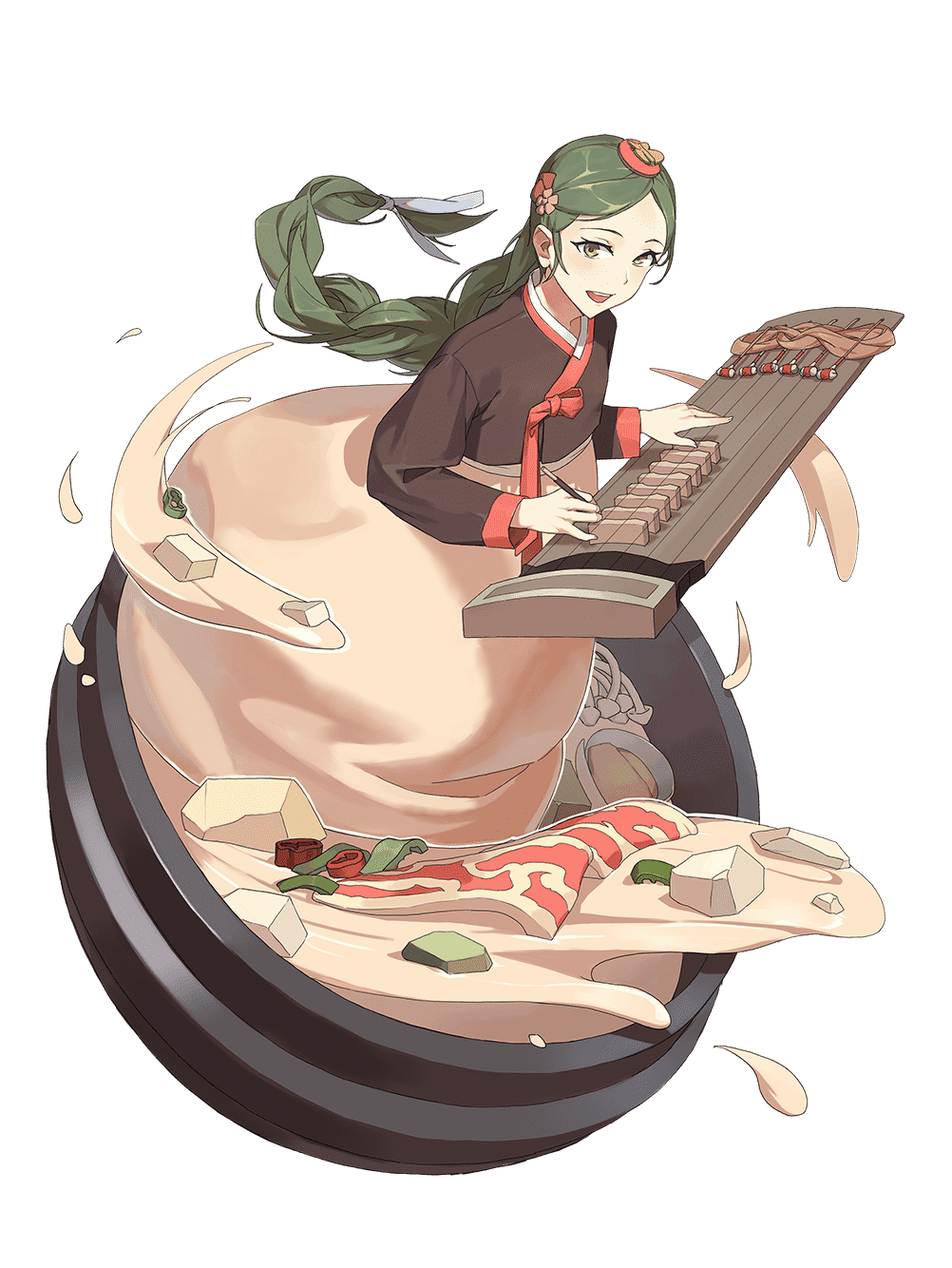 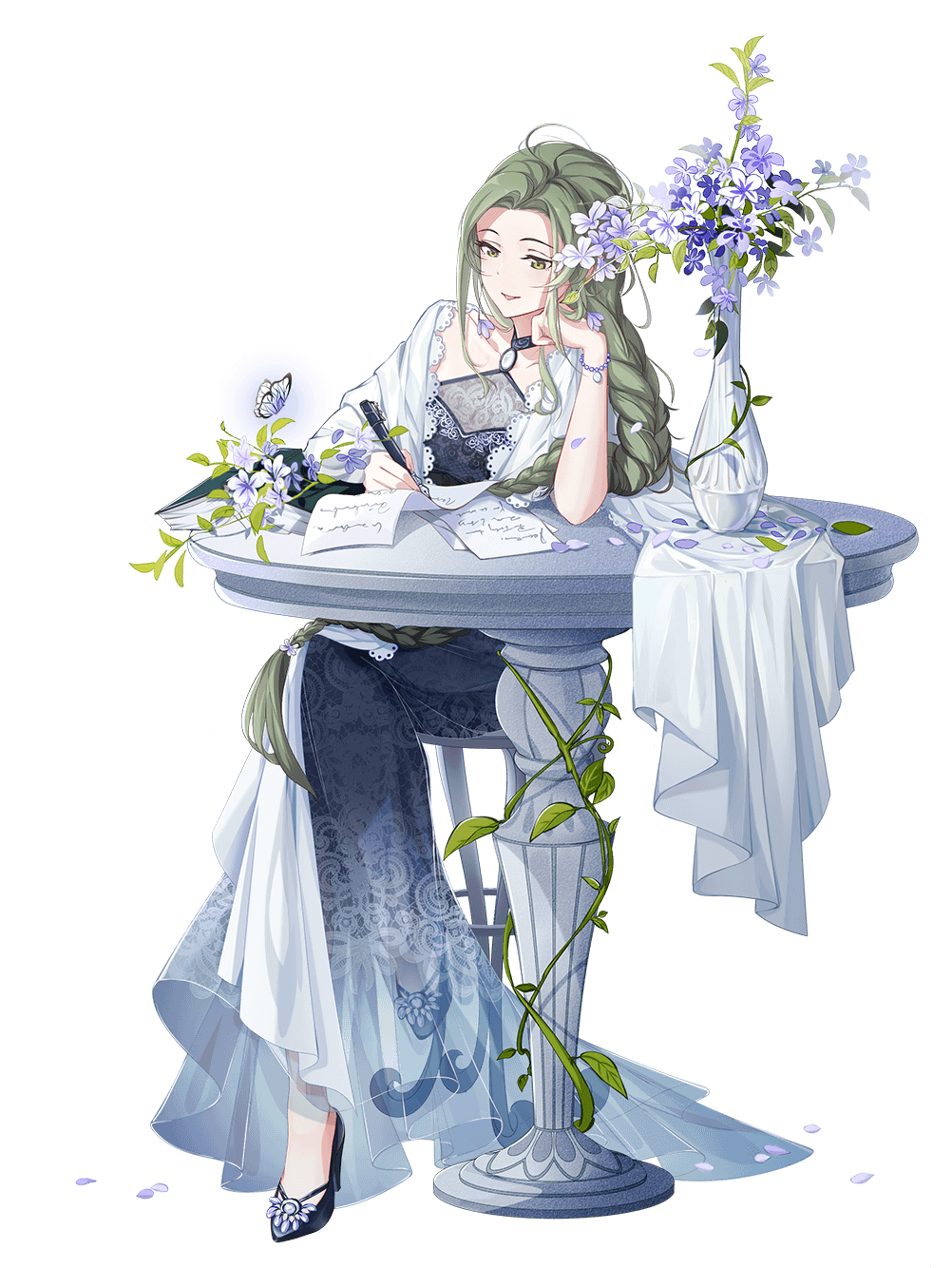 A gentle person who isn't obstinate, but also doesn't just go along with the crowd. Rather, she maintains a unique personality all her own. Her gentle demeanor is infectious, and the sound of her playing can soothe people's hearts.

From the common folk to royalty, no meal is complete without doenjang-jjigae. For many dynasties on the Korean peninsula, this soybean paste soup was a royal cuisine believed to be capable of foretelling the fate of the nation, giving it an important place in people's hearts.

The "them" in interaction 2 may be referring to Kimchi and Ddeokbokki. 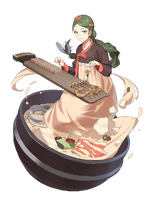 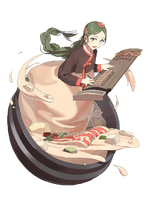 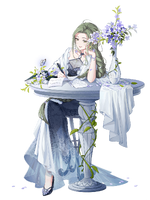 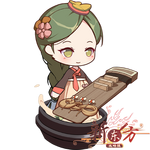 IV. Do Not Give Up

A black and white photo was laying on the square table. Bibimbap was sitting in front of it, her eyes empty.

The small room was filled with so many, depressingly negative emotions. That was not the first time I had to put up with such an ambience. In fact, I had lived in such an environment for a long time. I thought I had gotten used to them. Or rather, that I knew well enough how to coexist with them.

At that time, I still had hope in my heart. Hope of getting rid of them.

After standing in the doorway for a while, I called out to her softly. She turned her head slowly, as if she were a puppet in disrepair. Her delicate and beautiful face was lifeless, forcing me to swallow the words that were about to come out of my mouth. In the end, only one sentence came out.

At the dinner table, Bibimbap’s movements resembled those of a machine. It wasn’t that I couldn't understand how she was feeling back then. After all, that was our Master Attendant.

I tried to break that uncomfortable silence by starting a conversation.

I didn't expect her to speak up before me.

Snapping out of my dismay, I responded in a daze.

“Do you ever feel strange?”

Bibimbap’s voice was dull. That dullness didn’t originate from having no desires, but from having struggled thousands of times and being unable to do anything about it. Her heart had become as cold as death.

I put down the chopsticks in my hands and listened carefully.

“Many times, I have been trying my best to do everything that I desire. But there's always an invisible wall in front of me. I want, must get past it. But I just… never manage to. He could have survived…”

Babbling, Bibimbap revealed her inner thoughts little by little. With a heaviness that made it impossible to take a breath.

I pressed my hands on the table and pushed my body forward, trying to interrupt her self-blaming.

Yet it was me who was interrupted. Bibimbap's face was expressionless, her hands trembling slightly as she spoke out.

“What are you afraid of.”

I bowed respectfully in front of the statue, as if praying for or asking about Bibimbap. Or more like… I was asking myself that question. A long time ago, when Master Attendant was still around, I used to resort to the shrine whenever I was feeling miserable.

After all, I too feel the need to get rid of mental stress. After a short break, just as I was about to leave, an unfamiliar voice rang next to my ear.

I turned around. A young man was standing by me with a gentle smile. That smile carried an infectious power that could calm any heart.

“Ah, hello, I am Doenjang Jjigae.”

“To travel all over Sakurajima for one person…”

I whispered to myself as I gazed out over the distant landscape.

Tteokguk fondled the trinket in his palm and said slowly.

“They helped me to get out of the mire of pain by encouraging me when I was most confused and helpless.”

I sighed, my mind wandering back to Bibimbap.

“I have an important person too.”

Stretching out my hand to draw an imaginary circle in mid-air, I said in a daze.

“She is also suffering now, but I can't find a way to help her. I’ve been watching her sulk and grieve day by day, slowly becoming more and more apathetic. Becoming someone I don't recognize at all. Yet all I can do… is watch.”

People always feel helpless when stating things they can't do anything about.

Mental fatigue made me lower my head. Tteokguk held my hand. Something was pressed in the palm of my hand.

“Leaves, from a mulberry tree.”

Tteokguk gave me a sunny smile.

“It will bring you good luck. Maybe she just needs some time for herself. And I think you do too.”

“Relax and don't let yourself get caught up in it too.”

I felt the pattern of the mulberry tree's leaves. Then I whispered.

“Thank you. I hope I can find that time.”

At the gates of the city, a man in uniform shouted from his horse.

“All personnel evacuate! This is an order from the Guild of Chefs!”

On the way home, Tteokguk and I bumped into field officers affiliated with the Guild of Chefs.

Looking at the man's anxious and tired look, my heart got a bad feeling.

“A swarm of Fallen Angels has bypassed the Guild’s defences, and this town is in their path.”

The man was concise.

“Shouldn’t we go fight them?”

I tried to keep myself calm as I suppressed the shock I was feeling.

The man dropped a map with time and location marked.

“According to the scouts, this map shows the location of the Fallen Angel swarm from ten minutes ago, along with an estimate of how many of them there are.”

Before he could finish his sentence, he was already driving his horse towards the center of the town. A warning was shouted along the way. We picked up the map, which was marked close at hand, with a bewildering number of Fallen Angels written next to it.

Tteokguk’s face looked grim, as he turned to go help evacuate the town. I grabbed him with one hand.

I gazed at the map and a bold idea took shape in my mind.

“It’s too late, we should go help sniping them.”

Tteokguk opened his mouth with an incredulous expression.

“But the number of…”

Soon, he calmed down again, showing an inexplicable smile.

“Now, come home with me first.”

Having made my decision, I took Tteokguk’s arm and ran for home.

“The person I mentioned before is also a Food Soul. If we can get her on board, we can last a little longer.”

When we got home, Tteokguk uttered a surprised gasp as he saw Bibimbap.

“You know my sister?”

I subconsciously wondered, but quickly came back to my senses.

“Now is not the time for that. Sister, we need your help.”

I explained the situation and my plan quickly. However, despairingly, from the time we entered the door, Bibimbap's eyes hadn't even shown a single glimpse of emotion.

“Could you come with us?”

She went silent and turned her head away to avoid my eyes.

Looking at Bibimbap, who was very different from what I remembered, I ran for the door without looking back. I called out to the puzzled-looking Tteokguk.

As I was standing outside the door, Tteokguk seemed to be still talking to Bibimbap. After a while, Tteokguk came out with a helpless face.

IV. Do Not Give Up

Tteokguk raised the flaming flower branch and burned the Fallen Angel before him to a crisp.

“She’s the sister I was talking to you about.”

With difficulty, I pushed aside the corpse of the Fallen Angel that had fallen towards me and slowly regained my soul power.

“The Bibimbap you know wasn’t like this either, right?”

I managed to crack a smile with difficulty. My soul power was replenished, I was ready to face the next Fallen Angel.

“Like I said, I remember her as a gentle maternal figure. She encouraged me, she supported me, she guided me.”

Flames burned around him, growing brighter and brighter.

“I really cannot picture her saying something like that, that she has nothing left to live for.”

His hands spread sideways. Waves of soul power pushed away the Fallen Angels that were approaching Tteokguk’s surroundings.

“It’s because she has lost the one she loved.”

The flames converged into a tornado, once again burning away pieces of the Fallen Angels. Tteokguk held his knees and gasped for air with small breaths.

“Bibimbap wouldn't have become so depressed just because of one loss.”

Once again, the soul power converged in my hands. The feeling of exhaustion and emptiness reminded me that I didn't have much time left.

“Unfortunately, you saw the reality.”

Tteokguk was speechless and could only respond with silence. The next second, the ground shook. We both looked up.

Sighing helplessly, I rushed forward without hesitation. In the meantime, I casually asked Tteokguk, who was following behind me.

“What did you say to my sister before leaving?”

Tteokguk froze, then revealed a happy smile. His eyes were slightly lost, as if caught in a memory.

“Told her a line she had said to me in the past - No matter the situation, you have much more than you think. Don’t give up -.”

“Is that all? It doesn't matter what happens now, does it?”

Shortly after having a few words, Tteokguk and I have rushed to the Fallen Angel.

Facing this behemoth… sure enough… without Bibimbap…

With the idea of doing our best, we headed towards it. Just as I closed my eyes and waited for death to come, a ray of light shone on us. Along with it came a familiar yet unfamiliar gentle voice.

But Bibimbap didn't want to give up on her Master Attendant. She chose to leave the responsibility of taking care of him to Doenjang Jjigae and went to Light Kingdom alone to study medicine. Inspired by Bibimbap's initiative, Doenjang Jjigae decided to fully support her idea.

The first thing she needed to do was to take good care of the Attendant. But it wasn't as pleasant as one might expect. The pain he felt from the illness was never just a moment long. He felt it every minute and every second, for an extremely long time. On top of that, the pain caused by illness was not just felt by him, nor was it just physical, but it was also mental and emotional.

As it was said in the beginning.

Uneasiness and many negative emotions filled every corner of the duo's lives.

No escape, no resistance.

The only glimmer of light to look forward to in that abyss was the eventual return of Bibimbap. The wait and companionship had become a habit that could not be erased from the perception of Doenjang Jjigae.

And so, they waited for the return of Bibimbap. And as expected, she returned having acquired medical skills. However, things changed, and fate played a trick on them once again.

The time the Attendant had left was no longer enough for Bibimbap’s treatment. They were just a few days short.

Maybe I should have walked on the road faster?

Maybe I should have worked harder during my studies?

Thoughts such as these constantly nagged at Bibimbap. And there was nothing Doenjang Jjigae could do about it. All she could do was accompany and take care of Bibimbap, just as she did with the Attendant. Even though there was no end in sight to this difficult period.

This gentle female Food Soul has turned the most ordinary words into the most unforgettable feelings. Companionship and patience are often more valuable than trying to do something about one’s situation.