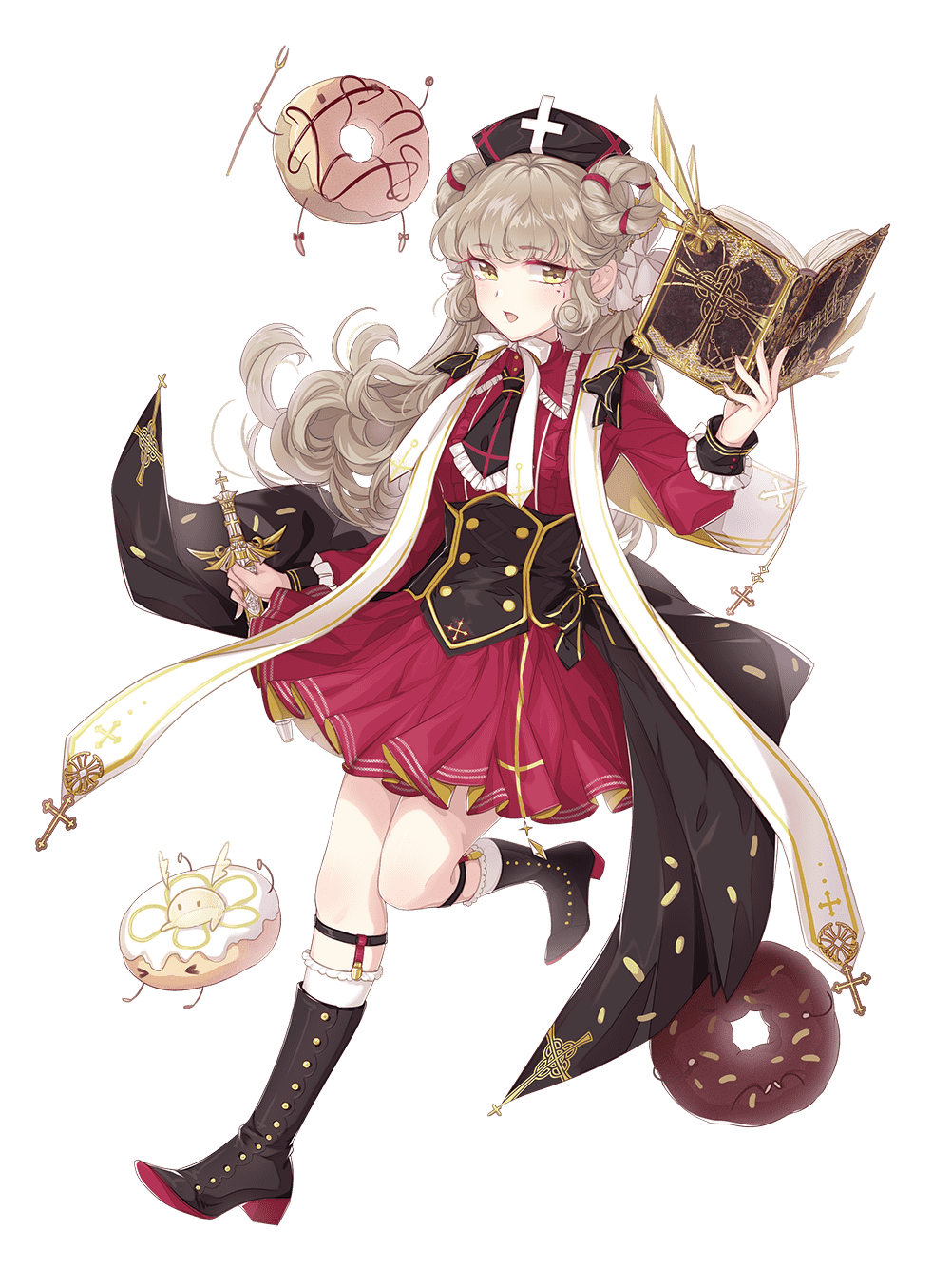 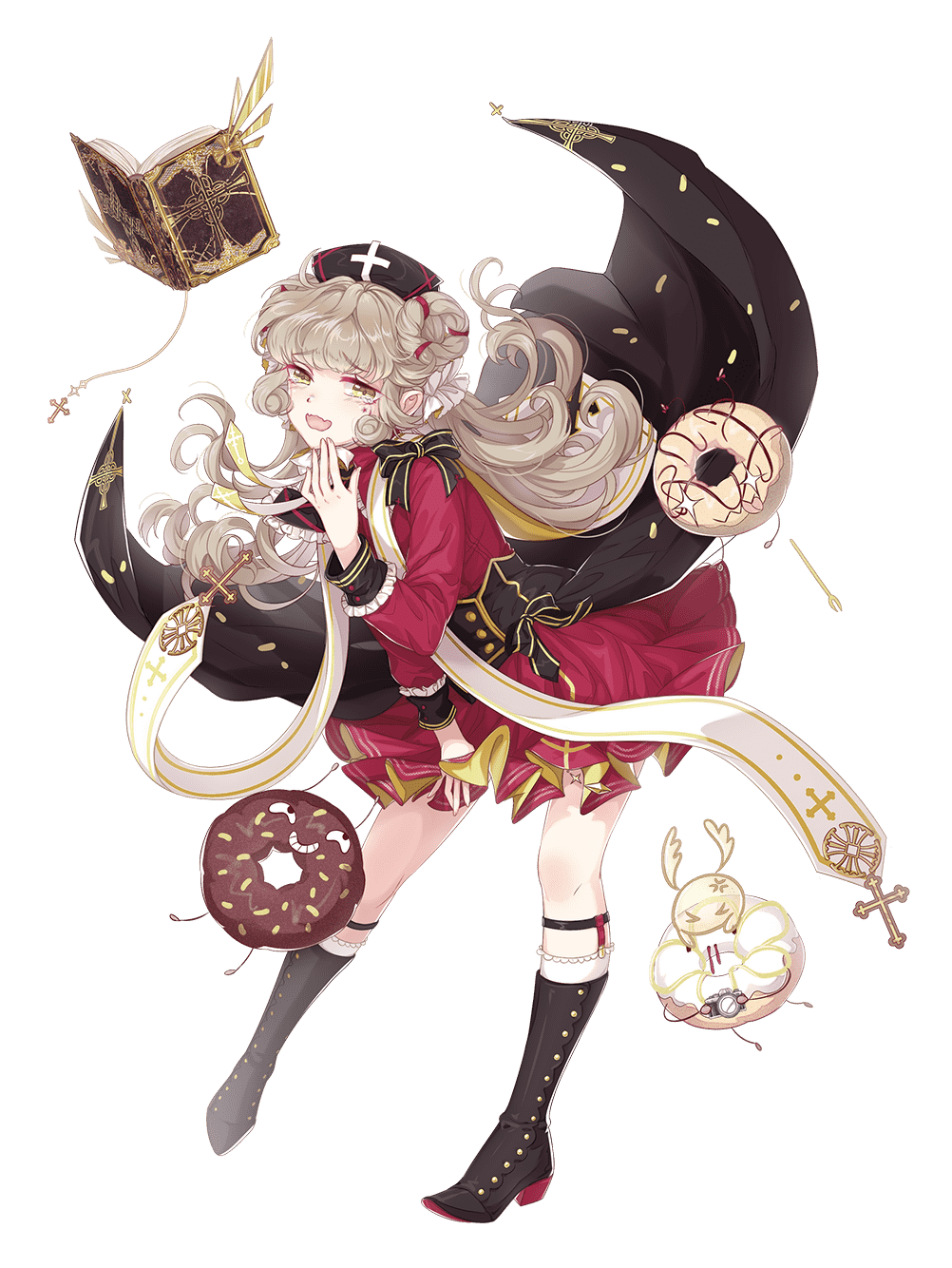 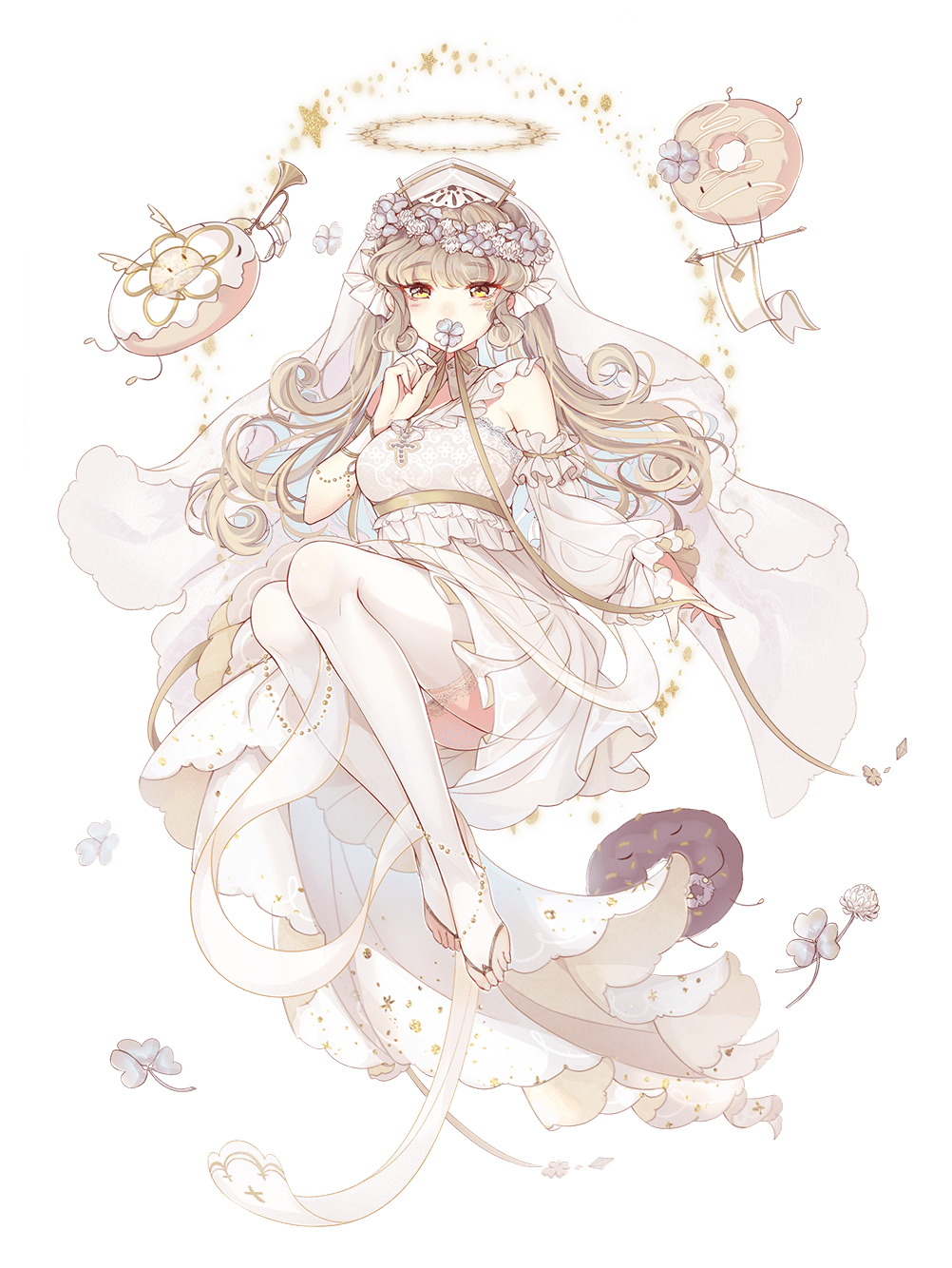 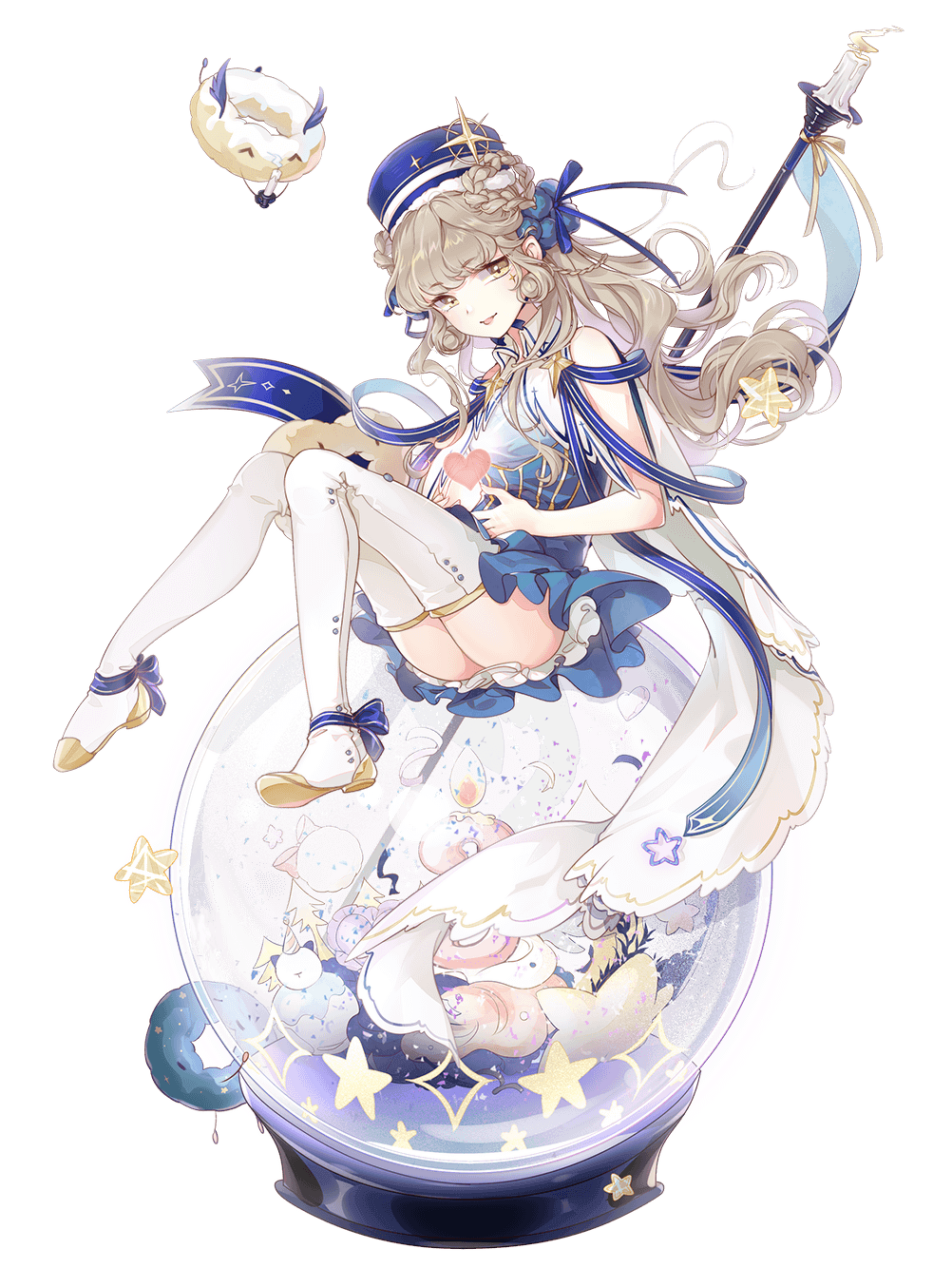 Looks solemn and chilly on the outside, but inside she's a total girly-girl. She believes that the existence of Food Souls on Tierra is a blessing to humanity, and she wants to spread goodness and love throughout the world. As a soldier, she holds herself to strict standards.

Aside from how good they taste, just on looks alone donuts are able to win over most people. In recent times, the donut has made whirlwind progress and occupies a very high place in the food pantheon. Some people have even made a special donut holiday so that everyone can enjoy them even more.

Donut was the first Food Soul to be released on the Global server before all other servers. 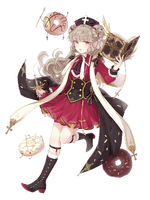 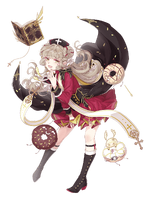 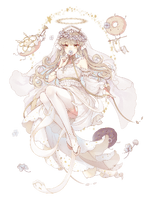 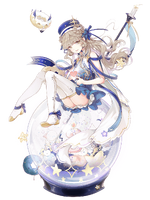 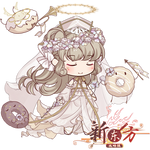 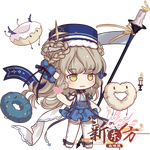 IV. Fallen Angels and Us

“May God forgive our sins.”

I stand in the chapel, silent in prayer, head raised to gaze upon the Goddess’ statue.

The statue is deformed, her hands meant to hold a bouquet of flowers are now mere fragmented debris below her.

The hall is a mess, broken pews strewn about.

Once a holy place for devotees to hear the gospel, now mere deserted ruins are left to us.

The evening sunlight sets through the cracks in the wall.

Reminding me that the day is done.

The hunt has been going on for seven days.

An elderly voice accompanied by the clanging of metal stops my train of thought.

I pause my prayer and ask nonchalantly.

No matter what chaos presents itself before me, I must always remain calm.

The Holy Lady of God’s Council must not wear her heart on her sleeve like the common girl.

“All the survivors have been settled, the others are looking for more clues nearby.”

I nod in approval, preparing to give them new orders.

Suddenly, a deafening roar echoes through the chapel from far away.

A bright light shines from the forest, accompanied by billowing smoke.

The smoke clears, revealing a huge cross formed by light in the sky.

Recognising the danger, my hands reach for my blade and my bible.

Fallen Angel attack? No… Can’t ignore the possibility of him stirring up trouble on purpose either.

That was far too dramatic a performance, but Pretzel isn’t part of the Council either, so he can’t be managed…

Embry’s words snap me back to reality.

He lowers his face, sword drawn and standing guard by me.

Without acting rashly, he stood with his face earnest, seeking a command from me.

I quickly assessed the situation and responded.

Just as we were about to set off.

A figure leaps from the surrounding debris, blocking our path.

The figure is a familiar one.

The old knight’s face stiffened, growling at the newcomer.

“You dare show your face again? You filthy heathen.”

The azure glint of a blade flashes past.

“You have no part in this, Embry.”

The intruder swung his blade around, tone cold.

Exposed to the air, translucent blue arms are encircled by cold flames.

Painfully obvious to any experienced Master Attendant or Food Soul, that would be the signature trait unique to the Nevras Broken Blade Tribe.

Not having time to check up on the old knight, the best I could do was softly order him to retreat.

Facing this enemy, I have to give it my all.

Sword promptly drawn, the bible in my hand rustling even without a draft.

“I’m here to discuss something, I bear no ill will.”

“I have nothing to discuss with the likes of you.”

The bible begins glowing as I fully enter battle mode.

The intruder lets out a unintelligible growl, as if he couldn’t hold it in anymore.

I acutely grasp the keyword of that sentence.

The intruder clapped twice, and a Forker scurries out from the debris, sitting by his side tamely.

“Look, they won’t attack me, nor reject me.”

The intruder’s voice softened as he gently scratched the Forker’s head.

“You’re saying, your running around, wreaking havoc on civilians with Fallen Angels is right?”

The intruder stiffened, backing off slightly.

All the while I pushed forward, sword raised.

“You’re saying, your turning from a holy knight of God’s Council into this freakish, monstrous, devilish being is right?”

He opened his mouth, ready to argue.

Yet his words were caught in his throat, and not a sound came.

A breeze whiffed past, rustling the clothing scraps on his arms.

Under the evening sun, the crystallized cross sear is especially striking.

Glimmering lights flare out from the bible, encasing my blade, and my preparations are ready.

“If you have even a shred of knight’s honour left, then raise your weapon!”

Before the silent figure, I berate loudly.

It’s just like the very beginning, when I taught them in the training halls.

As if being excited by my words, the intruder let out a crooked laugh.

“What a ridiculous claim, just like this wretched chapel!”

He lowered his face, and the crystallised right half of his body burst into cold flames.

Lighting his blade aflame, he sunk it into his right arm.

The crystallised searing clinked onto the ground.

“Holy Lady, I thought you’d be able to understand.”

“Apologies, there’s no way I’ll sympathise with your twisted way of thinking.”

Sword thrust forwards, soul power flaring as it flew towards the enemy like a bullet.

He roared, sprinting towards me.

Broken blade in his grip easily ripping apart the light before him.

“By God’s word, may the flames of purity burn away sin, and bring peace to humanity.”

Calmly stepping backwards, I raised my bible, light streaming from the pages forming a magical array before me.

Clanging rings through the air, our weapons clashing again and again.

Scowling at the crazed figure before me, my brows knit tight.

I was ready to summon an array to destroy him, yet was stopped short by his next sentence.

IV. Fallen Angels and Us

Patting out the dirt on my clothes, I sheath my sword and let out a long sigh.

The intruder was bound by rings of light, restrained to the ground yet constantly struggling.

“You won’t be getting out of that.”

I squatted down, looking at his face.

His once handsome and attractive features are now gone.

This twisted, ugly appearance was what replaced it.

Pitch black and azure threads criss-crossed across his face like scars.

All that remains that is familiar to me is but the tattoo on his forehead.

Lines running over his face, leaving only it untouched.

It was done for him by Embry.

“Speak, what’s this about God’s voice?”

I gripped his bangs, raising his head to face me.

Words left his mouth in intermittent croaks, and his features relaxed as he looked at me.

Perhaps it was my imagination, but for just a moment it looked like his eyes cleared up.

My brows creased, inquiring him to elaborate.

“Fallen Angels… are the… true… vessels of God…”

As he spoke, he lurched and coughed heartily, seeming to have cleared up his throat.

“I felt it when I absorbed it into my body…”

“God desires… the end of humanity…”

“There’s too much that’s suspicious with this world…”

“Do you still remember that experiment report I did?”

The pursuit operation has ended after spanning seven days.

Under the morning sun of the eighth day, we set off for home.

Astride my steed, I beckoned for the adjutant beside me.

The old knight turns to face me, hands wrapped in bandages.

“Do you think that the teachings are right?”

I asked softly, pushed by whatever state of mind I was in.

“God protects humanity, and bestowed upon them Food Souls to teach them right from wrong, to lead them to prosperity.”

Not giving a straight answer, Embry began quoting from the gospel.

“Yes, we can differentiate right from wrong, we bestow upon you knowledge, and lead you to prosperity.”

I muttered it like a mantra, the unrest in my heart from the previous discussion completely diminished.

I pushed forwards on my steed.

Tucking that unspeakable sentence in the depths of my heart.

If God does not love humanity, we will teach Him to.

God’s Council is a religious organisation widely distributed across the lands of Tierra, and they worship the only god of this world, Tierra.

God’s Council believes that Food Souls are a blessing bestowed upon humanity by Tierra.

Joined hand in hand, Master Attendants and Food Souls should spread kindness and love throughout the world.

This belief is widely accepted by the people.

For not everyone can become a Master Attendant, and there are places that do not receive the protection of Food Souls.

God’s Council’s beliefs and actions no doubt give the people hope of peace in this chaotic world overrun by Fallen Angels.

The founder of God’s Council was a Master Attendant as well.

His Food Soul, Donut, takes on the duty of Holy Lady and leads the armed forces, God’s Army.

The duty of God’s Army is not to spread devotion through force, rather to enforce public order.

The ones that actually face the Fallen Angels are the centerpiece of God’s Army, a group of Food Souls led directly by Donut.

All of this should progress in an orderly fashion.

But the unexpected occurrences in mundane life cannot be prevented.

There was a member of God’s Army who was an avid researcher.

He believed that to rid the world of Fallen Angels, one must first understand them.

As his research progressed, he uncovered secrets.

Secrets… that should be kept from everyone, be it Fallen Angels, Food Souls or Humans.

His research drove him insane.

Finally, he came up with a daring idea.

He absorbed essence extracted from Fallen Angel remains into his own body, to experience, to understand their existence.

His target was the legends of Spectra, rumored to once have been a famous chef, as well as the possibly once-human Specter.

After that, he became an apostate.

Then became a wanted criminal, whom Donut led a hunt for.

And then… he died.

Nobody knows what he found out, what he knew.

The only one he contacted after defecting was Donut, who left a mere word and refused to elaborate.

“Food Souls are born of God, and we love humanity.”