A Fallen Angel born from people's various hopes and illusions. It is imprisoned by something for unknown reasons.

A healer that provides team stun immunity is ideal. Note that these options are very limited and inaccessible for the average casual player:

Players should bring a Healer that can cleanse away the stun effect:

If neither a Healer with Team Cleansing or Stun Immunity is an option, choose a Food Soul with high AOE healing on basic skill:

If you want to use a second healer, you should try to select ones that provide some sort of utility beyond just healing. This time around, energy skill-related utility are disregarded:

All link-skill related options are disregarded due to Dreamer's strong energy drain effect.

Otherwise, use any healer that heals decently, refer to the potential options from the Healer guide

Food Souls immune to stuns will be able to deal more damage than usual vs Food Souls that are not immune: 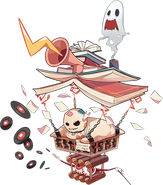 Retrieved from "https://food-fantasy.fandom.com/wiki/Dreamer?oldid=97605"
Community content is available under CC-BY-SA unless otherwise noted.