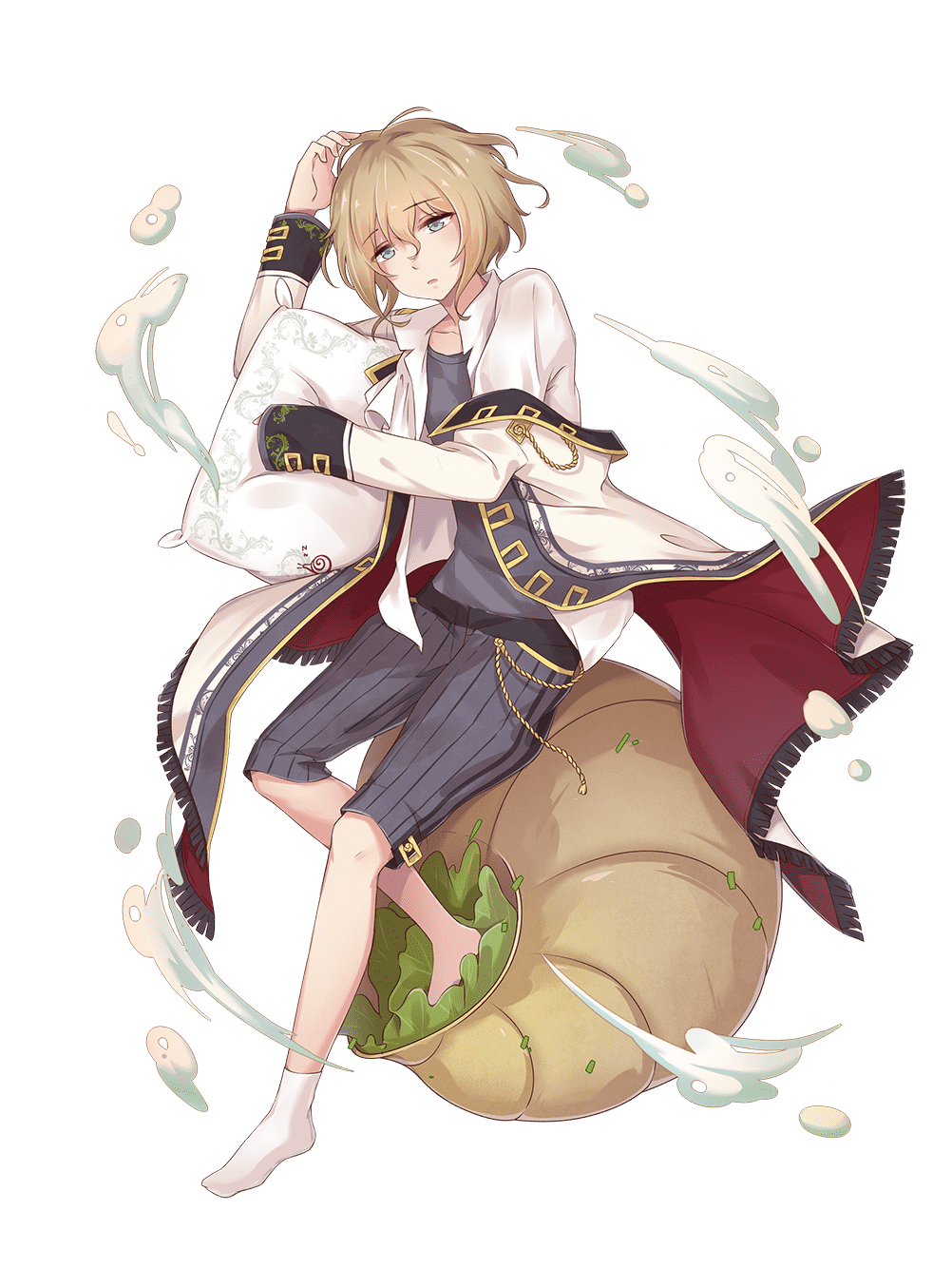 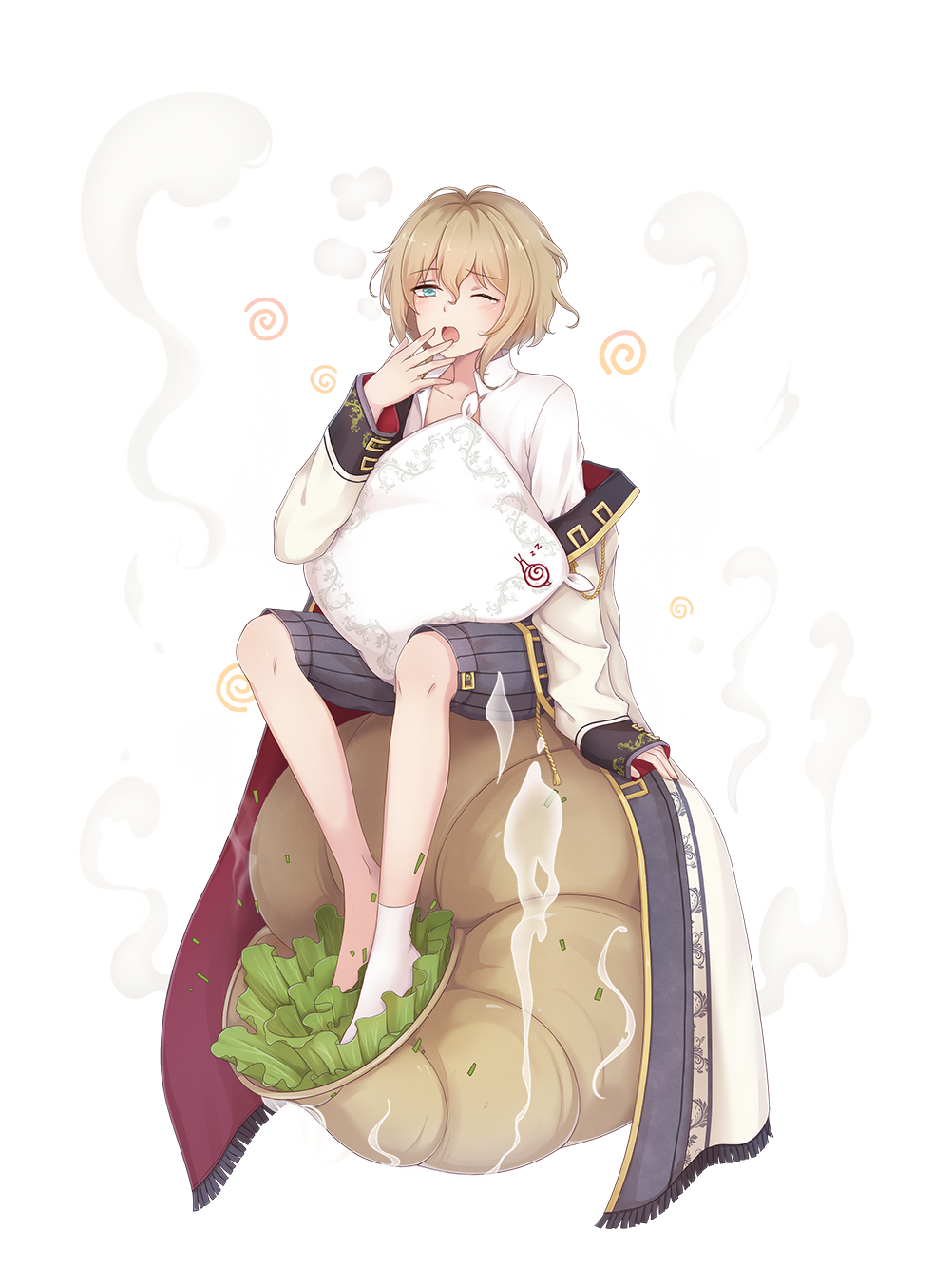 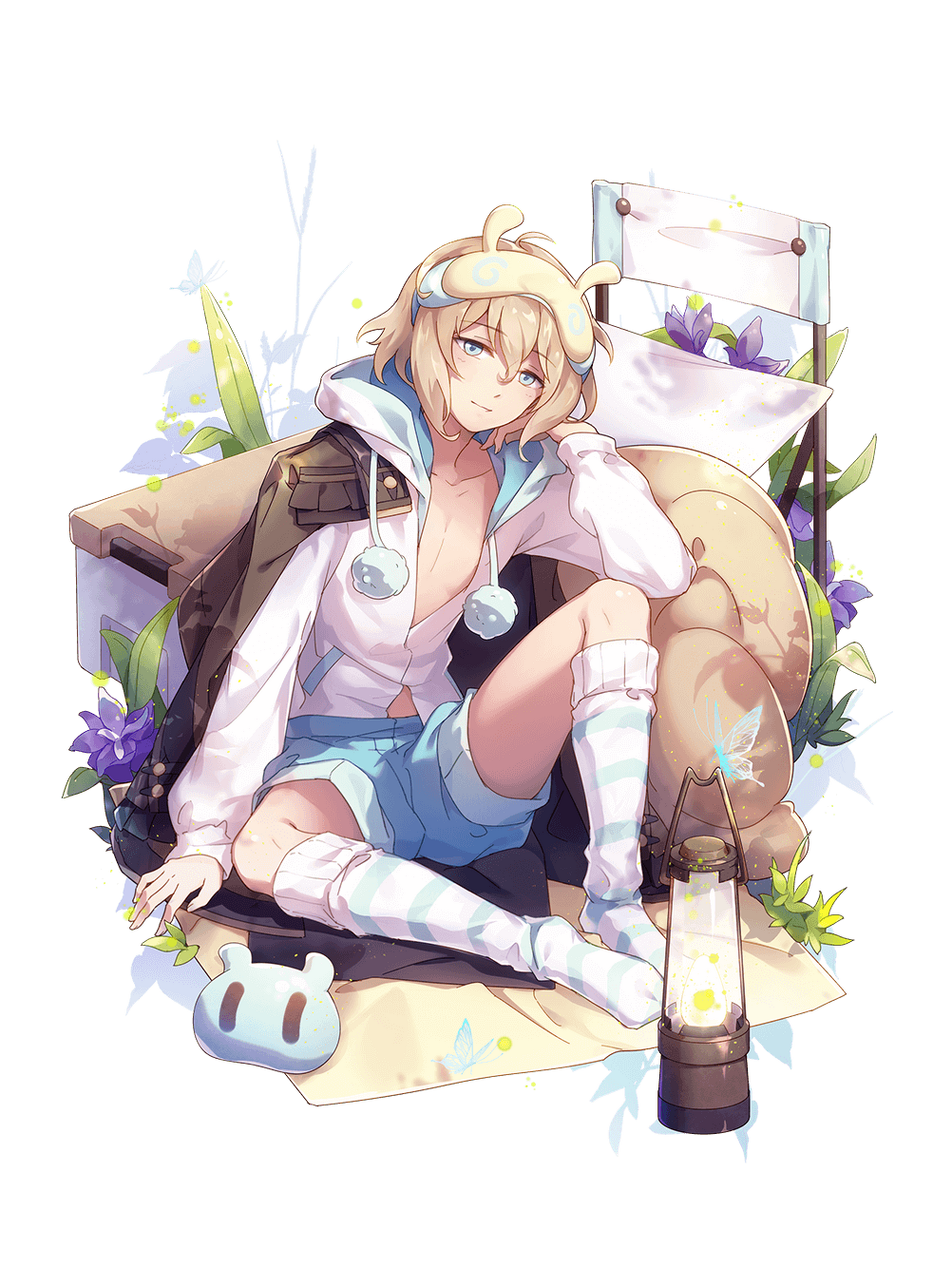 A drowsy-eyed youngster who is constantly sleeping. He always carries a pillow with him no matter where he is. The only party he likes is a sleepover party... I wonder why...

Escargots are a delicacy in France. Who would have thought baking cheese with snails would be so delicious? 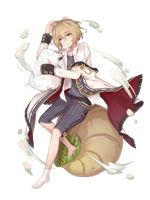 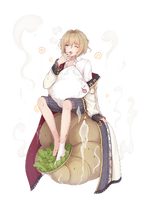 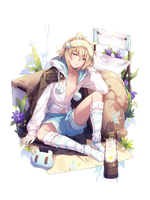 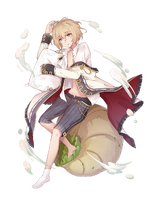 III. Cure if I Can

I yawned, stretched, and opened my eyes.

Someone who looked like a woodcutter came in to my view.

It seemed he was shocked dumb by my presence there. I put down the pillow in my hands, adjusted the lapel of my jacket and introduced myself.

"I am Escargot, please treat me kindly."

This person seemingly hadn't come to his senses after the initial shock. His eyes were as big as dinner plates, and he stared at me with an expression of incredulity. Yet, the next second a reaction seemingly played across his once frozen features. He suddenly took my hand and said,

"Are, aren't you super powerful?"

I cocked my head and looked at him puzzled.

I wanted to answer him properly, but all the sudden extreme tiredness came over me like a wave. My eyelids became heavier and heavier...

My Lord was yelling into my ear anxiously. Though I wanted to provide him an explanation, but I couldn't even stand up as the feeling of fatigue had drained my energy.

"First, let me get a good rest," I thought to myself.

The very next second, everything went black.

When I awoke, I discovered the figure of My Lord the cooking attendant sleeping next to me.

"That you were worried about me ... so you've been keeping watch over me?

I felt a twinge of guilt when I noticed the dark circles on his eyes.

Maybe it was because he felt my body moving. The cooking attendant who had just been sleeping slowly opened his eyes, and, like the first moment he met me, he grabbed my hand excitedly and said,

"I was suddenly I was overcome with tiredness that it scared me to death."

"I thought...I thought it was because I am not powerful enough...so..."

I don't know why seeing him sitting there rambling on incoherently like that made me feel a little happy.

"It's just that, I get tired easily compared with other food souls."

Because for so many years drowsiness has gripped my brain, it has caused me to speak and move much more slowly than others.

As I sat there explaining it all to him slowly, his expression went from one of excitement to calm

After explaining it all to him for a long while, I couldn't really read his expression.

"My Lord looked me and asked,

"Do you have sudden, uncontrollable sleep attacks?

For one brief moment I thought I saw disappointment play across his face, but it disappeared as quickly as it came. It made me doubt if I was wrong about what I had seen.

After this, My Lord no longer spoke, and I also felt that the time had come to sleep.

As Mr. Sandman's magical sand was blowing around my face once again.

III. Cure if I Can

When I woke up again, My Lord was not in the room.

I stood up and looked around, finally finding him behind the house.

He was standing there, staring intently in one direction with an expression that was, at times tender and at other times much morose.

I wanted to be close to him, but I ended up disturbing the silence, My Lord turned around and smiled when he saw me, saying,

"I have something to show you."

My Lord bade me to return with him inside the house, where he rummaged through the kitchen cabinets, and put a bag of things in front of me.

My Lord took out a bag and poured a bag of some kind of powder into it, he added hot water, then placed it in front of me.

Seeing his expression of eager want, I didn't have the heart to decline.

I took the glass of black liquid from him and smelled it, filling my nose with an indescribable aroma.

"This is called black coffee."

There was a bit of joyful exuberance in My Lord's voice.

"It is said that it can refresh you after drinking it."

I understood. My Lord hoped that drinking this could cure my narcolepsy.

But could this single bottle do the trick? Although I don't think it would be effective, I decided to drink it down so as not to let My Lord and Master down.

Compared to this, I preferred the sweetness of milk. I couldn't hold back the complaints in my heart.

I felt the bitter liquid flowing down my esophagus deep into my body. I also hoped that this drink is just as magical as My Lord said, and could actually cure my narcolepsy.

After all, with a body constitution like mine, at times I may still may fell somewhat vexed.

My Lord's face was filled with an expression of great expectations, but asked in a cautious tone.

I really want to respond, but my body felt something inside resisting the drowsiness which had been surging stronger and more overwhelming than usual.

Thus, I had no time to say a single word, but I just fell into a deep sleep.

Today I've been awake for the longest time in my life.

I have been standing next to My Lord's bed not feeling tired in the least.

"You look energetic today." My Lord said as he was laying on the bed and looking at me.

"You look exactly the same as the first time I met you. You haven't changed at all. Food souls are truly amazing."

But at that moment My Lord the cooking attendant, who had been full of chirpiness and clamoring to cure my narcolepsy, was so weak that even his voice was barely audible.

I didn't know what i can say now to stop the cruel passage of time from taking its toll on him. I stared at his wrinkled face and gaunt frame and knew very well that one moment may have been his very last.

"The only thing I want is...to go...somewhere very far away"

My Lord comforted me in a debilitated voice, then, he closed his eye, as if he was recalling something.

"It's such a shame, I have always...have always wanted to save her..."

"But its heavily guarded and fortified there...under just my own power...it's a foolish dream..."

Perhaps it was a brief moment of lucidity just before death's finality. My Lord's creaky voice filled the room as I stood quietly listening to him tell a long, long story.

And once he finished narrating the story, he took his last gasp, and his breathing stopped.

After My Lord's quiet burial, I went to the place he had spoken of on his death bed, and came to an imposing stone castle.

My Lord had been looking forward to helping cure my narcolepsy, as he wanted to use my power to rescue the "queen" locked in the castle.

Ironically no matter if it was coffee or something else, he never did get his wish. But his death brought my mind from the haze in which it has been trapped, to exceptionally lucidity.

I easily sneaked into the castle and found the prison of My Lord's memory.

"Staying in a room like this, even if he were stronger, maybe now..."

I pondered the question of what attitude the food soul My Lord spoke of would take when I pushed the doors open.

With my heart a flutter, I pushed the heavy iron doors.

She was sitting there in the middle of the room. She was not as depressed or misanthropic as I thought she would be. Her eyes were calm and her face composed.

My gaze met hers.

A smile played across her lips.

The cooking attendant who summoned Escargot was once a chef in the majestic castle.

He was nothing but an insignificant little chef, yet, one day he summoned a powerful food soul.

Of course, the palace royals in all their vanity couldn't stand the thought of a low ranking cook who had such a talent, so, they ordered him held in prison on trumped up charges of plotting a rebellion.

The food soul he had summoned was also put into shackles with her feet chained.

The powerful food soul escaped from prison with her cooking attendant during the night, but immediately fell into a trap that the enemy had set.

How could the chains stop them? The crafty royalty knew all along.

Faced with tens of thousands of enemies, Chefie decided to end his life but was stopped by his food soul.

Afterwards the food soul of absolute power exchanged her own time for 30 years of her cooking attendant's peace and safety.

In the following years, Chefie has lived in guilt and spent most of his energy summoning the second food soul: Escargot.

However, the second food soul was not as strong as the first, and was prone to bouts of drowsiness and deep slumber.

Chefie didn't have the heart to let the sleepy Escargot go to such a dangerous place, so he tried any means he could think of to keep his hypersomnia at bay.

Fate is cruel sometimes. Every way that Chefie tried while he was alive ended in failure. But ultimately his own death was exchanged for a moment's lucidity.

Carrying his cooking attendant's promise in his heart, Escargot saved the food soul that had been trapped in the prison for 30 years.