Gloriville is the game's starter area.

Gloriville was one of the new countries established after the elves' ruling of Tierra. Because of its dominating position and military capabilities during the Era War, it controlled the north and south sea routes along with other territories during the Wangli era.

Gloriville is located in the center of the Knowles continent, connecting South and North Seas. It is one of the most fertile lands in the continent, and the second largest port city in the world. The Clemens family had vision for this place. With its geographical advantages, the family spent lots of financial resources to maximize the value of the land. 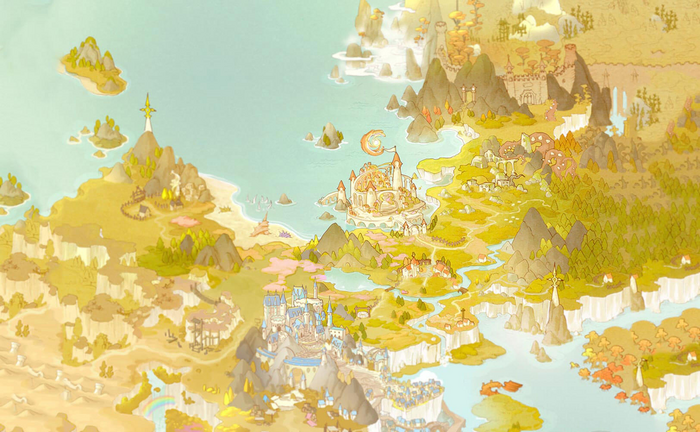 Currently Gloriville is in peaceful coexistence with regimes all over the world. After the Fallen Angels appeared, the human population began to feel increasingly oppressed and restricted. To prevent the collapse of political governing, Palata in Wangli year 500 began its territorial expansion policy. This led to several territorial disputes with Gloriville. However, due to the imminent threat of the Fallen Angels, the two countries reached an armistice and peace treaty in Wangli year 515 and have resumed trade and other activities.

Gold Tree Ranch is named after its beautiful golden leaves in the fall. It is currently the largest livestock farm in Gloriville. Wool and leather produced here are also exported to Nevras as popular clothing materials.

Battle of the Frontiers

In Wangli year 513, Gloriville and Palata had a fight on the border between the two countries. Thanks to the Academy's technical support, the Gloriville camp deployed advanced siege weapons on the border highlands. This battle was known as Battle of the Frontiers. In the following year, the original Palata City was destroyed by these weapons. In year 515, due to Fallen Angels, the two countries urgently signed an agreement and withdrew. The frontline was abandoned.

Midgar, built on the southern slopes, is the political center of Gloriville. The 19th monarch of the royal family stayed here managing the country’s affairs. In Wangli year 233, Midgar was caught in a political struggle and was completely blocked by the army for two years. It wasn’t opened until year 235. What exactly happened in Midgar for those two years has been a hot topic for Gloriville residents.

Parisel is located in the center of Gloriville. Due to the eastern high mountains and the rivers, Fallen Angels rarely appear here. People can enjoy a peaceful environment here. The access route connecting Midgar and Girona from south to north is a very important passageway, with many traders passing through, bringing with them specialties from different places. Parisel residents are fond of fashion. There are many fashion stores open in this small town. Among them, the most famous one is Yoseta designer studio.

Hilena is named the city of the sea and is one of the major cities of Gloriville, also home to the Royal Chef Guild headquarters. In the early days of Gloriville, Hilena was only a village. Only until Fallen Angels’ interference with humans’ habitats did it become more populated. The Gloriville Royal Family decided to set up a guild in Hilena, and spent the next 20 years to build this new town.

A major battle was fought against Fallen Angels in the eastern part of the Secret Forest. The humans took from the south to the north of the forest to fend off Fallen Angels. Due to command failures, the Fallen Angels drove straight in and destroyed the tree-line fringe of Karen City. This raised fear among Gloriville residents. The survivors left Karen City and fled westwards. Some fled to Sakurajima and the rest have settled and expanded in Hilena until present. Over time, Karen City became a ruin. Only a handful of adventurers later came to fight against Fallen Angels or explore for any treasures left behind.