This is a general guide intended to help players learn how to properly build Fallen Angels. If you need more in-depth information. We highly recommend you join a guild with an active Discord server that can assist you one-on-one.

Fallen angels can have a maximum of four stat lines, and these stat lines can be divided into six types: Attack Power, Defense Power, HP, Attack Speed, Critical Rate, and Critical Damage Fallen Angels Stats are also divided into five grades of quality. 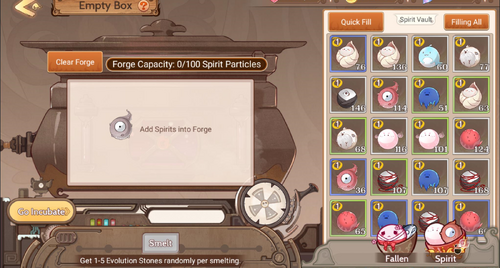 Match the stat lines of the Fallen Angel with its nature.

Purify ‘B’ Embryos for Uke Mochi (Enhanced) and Tsuchigumo

Unlock all the purification slots

Be flexible about moving your Fallen Angels around for various content

Build Meticulous or Lively/Energetic Fallen Angels for your Food Souls

Use Enhanced (Purple Frame Fallen Angels) to level up your Fallen Angels. They should be kept as Enhancement material.

Make multiple FAs of the same nature and type.

Make a Fallen Angel for every single Food Soul you use.

What Fallen Angels should I use?

Any Purple FA you see that’s Brave or Cautious nature, start to build it. You can ignore FA preference early game

4 brave FAs and 1 Cautious, including the free Uke Mochi you get from Level Up rewards. They should all be different Purple FAs (so 1 Inugami, 1 Aizen, 1 Conch, 1 Spectra, 1 Uke Mochi, for example)

1 Defense FA should be built specifically for certain Disaster Bosses, such as Aluna. You can build this with a Blue Fallen Angel that Tom Yum prefers.

As mentioned before, Meticulous and Energetic/Lively FAs should not be built and be left as fodders for enhancing your good FAs.

Resolute FAs should only be kept if they’re Uke Mochi (enhanced) or Tsuchigumo to build later down the line when you have more resources. Other purple FAs that have Resolute nature do not need to be saved.

For some SRs, because of low base hp at low ascensions, it may be beneficial to keep an HP stat on a brave FA so they’ll survive longer, however, this should only be temporary

Once you reach Sakurajima, the difficulty of the game starts to drastically increase and the game expects you to focus on building Fallen Angels properly to pass these stages (with the alternate method being brute-forcing the stage after over-leveling). Resolute FAs are needed to both increases the healing output of healers (via more basic skill activation) and increase the frequency of CC activation of units such as Peking Duck, Foie Gras, etc.

You do have the option to build a Resolute FA that is NOT Uke Mochi (enhanced) or Tsuchigumo. However, they require far more investment to justify using them (for example, a Tsuchigumo only needs to be +7 to start using but an Inugami won’t be viable until it’s a +10). This should be pursued if you already have a good +10 Brave of that FA and you don’t need the copies for anything else.

Skills and stat boosts from Artifacts can heavily affect what Food Souls should have what Fallen Angel. Consult trustworthy outside sources on building Food Souls revolving around artifacts.