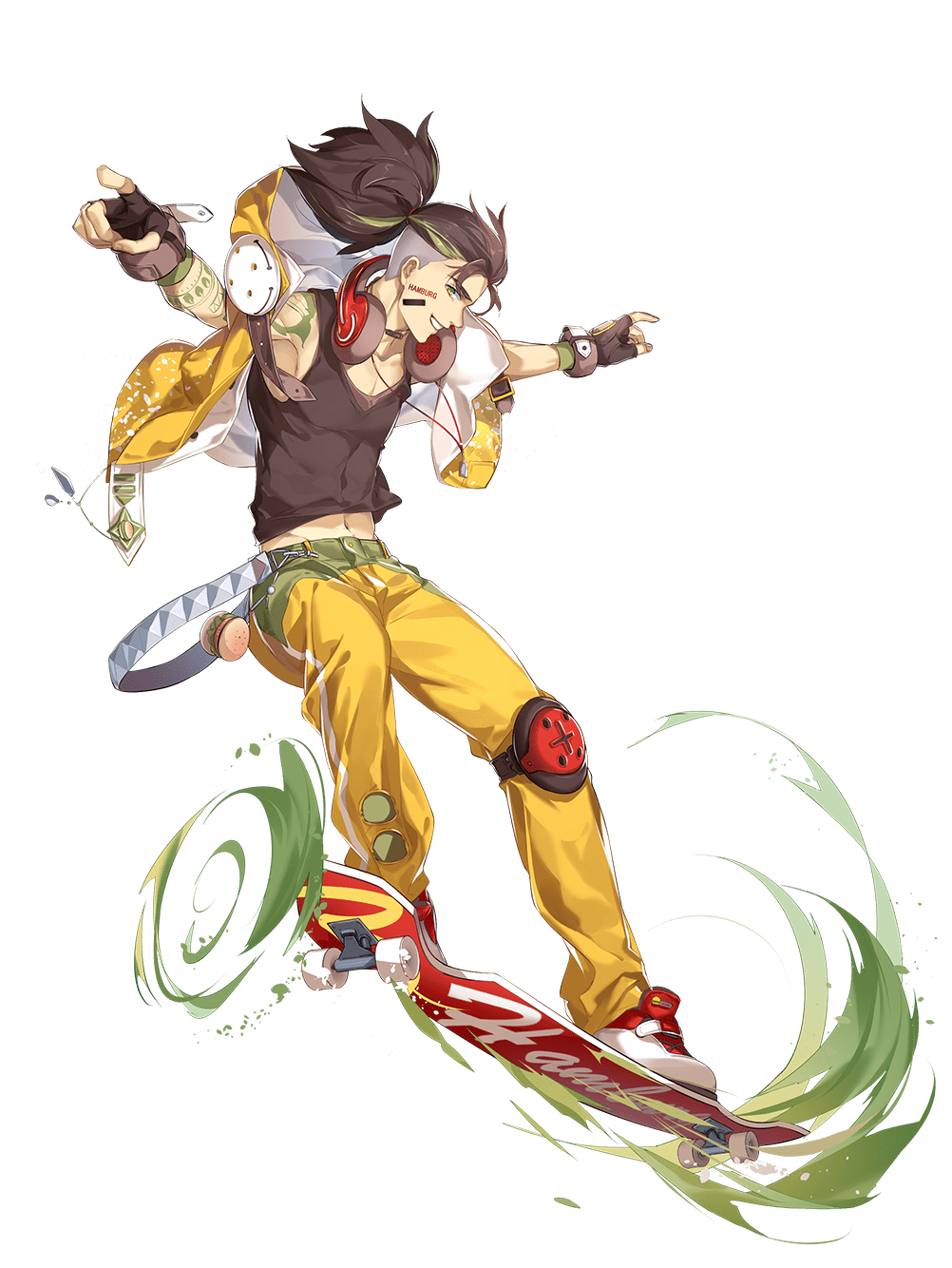 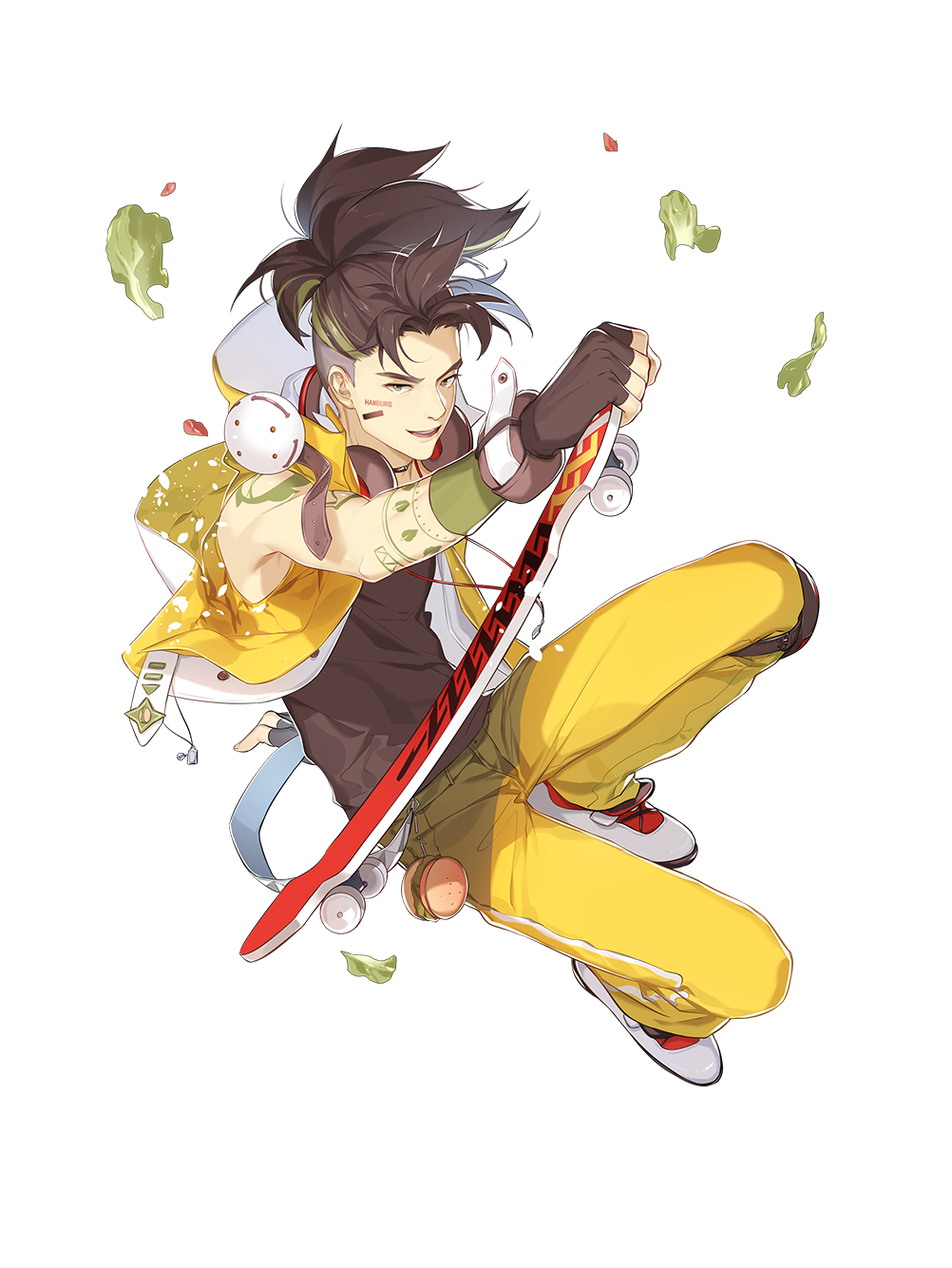 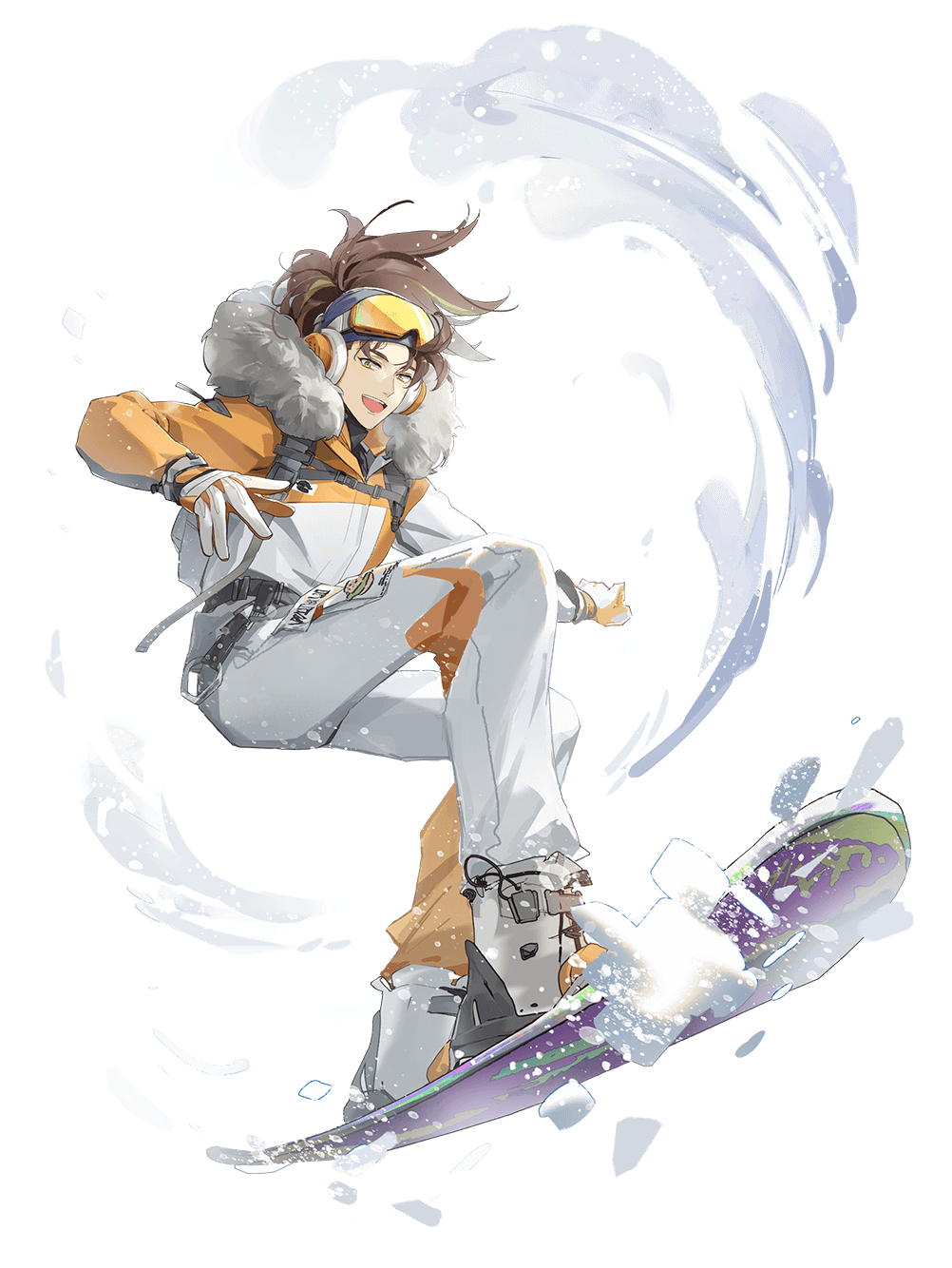 He is candid and carefree with a passion for skateboarding. He likes to show off on the street and enjoys being admired. However, if you pay him a compliment, then he will be rather modest about it. He is confident when competing with other men, but when it comes to girls, he seems to be completely lost.

Hamburgers are popular around the world. They come in all types and shapes, but don't eat too much! They pack a lot of calories. 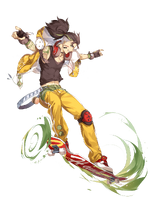 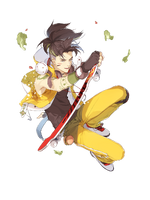 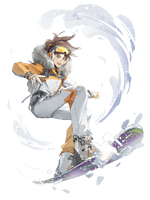 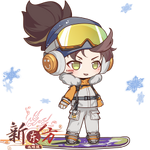 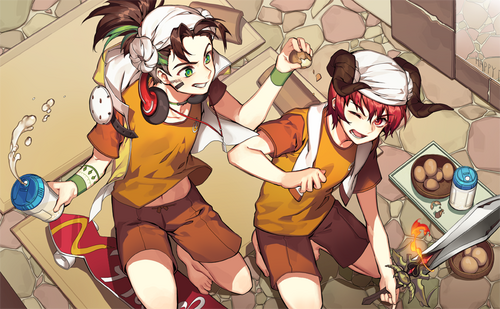 The wind was howling in my ears, my body was dancing along with the skateboard, and I performed one difficult trick after the other on the high platform. I thought of that skate park as a stage. I didn't care about the others’ performances. I just needed to show my own skills and my passion.

“Wow! Hamburger is so handsome!”

The cheers and praises went on.

When the skateboard landed, I suddenly fell on the ground. I held up my right hand and beckoned to the crowd. The whole park fell silent, as if everyone were being held by their throat to be prevented from speaking. I swung my arm down. As if they’ve received some kind of signal, the audience suddenly started shouting deafening cheers.

Back home, I left my medal in a random corner of the room. I can't even remember how many gold medals I won. I've faced so many opponents since I learned how to skate. From clumsy to skilled, from jerky to extraordinary, I never slacked off, and I’ve never been lazy for even one day thanks to my achievements.

Holding the skateboard and facing the mirror, I stared at myself. I thought back to what happened today, trying to simulate the feeling that those movements made me feel. Skateboard down and feet on, I began to dance in the small room.

After a while, I was sitting on the ground again.

Something was wrong with my rhythm. It was like a gear constantly running at a high speed, never stopping. But which generated an uncomfortable friction from time to time. A slight and imperceptible friction. I could feel it, but I couldn’t see it. This has been happening for some time now. I had to solve this issue. Thinking over that, I picked up my  skateboard and left home again.

Rolling down the street, I slalomed through the crowd. I jumped, landing on the handrail, crossing my feet slightly. The scenery around me changed very rapidly. From time to time my ears heard the exclamations of passers-by, composed of a mix of admiration and envy. If I were still the same myself of the past, I would certainly have stopped to perform in front of them. I like to be praised by others, that’s something I would never avoid. But not today. A tangled feeling has been in my heart for a long time now.

I murmured with dissatisfaction in the air and kept making difficult movements one after another. I have spent countless days and nights trying to polish and master every trick if front of my friends, but now they felt like strangers to me. I don’t have any problem with saying “hello” or communicating with them, but something was wrong. At one point, I stopped and looked at the platform that appeared in front of me and took a deep breath. I bent over to pick up the skateboard, sprinted forward, approached the ladder and climbed onto the platform. Then, my body changed posture in mid-air, and the skateboard under my feet seemed to rotate continuously on its own.

“My movement was fluent…”

Step on the board, land, stand still. All in one go.

That stubborn, tangled feeling in my heart was still there. Just then, a continuous clicking sound of skateboards interrupted my thoughts.

An indifferent male voice suddenly spoke. Looking up, I saw that seven or eight men and women of all sizes had appeared before me, all standing on a skateboard.

“It’s the first time we meet. We are the Skaters Brigade.”

I've heard that name before. They are very famous in the world of skaters. They like to travel around and challenge skaters everywhere they go.

"I heard that you are the best skater in the area. How about a competition? "

I’ve thought about it once. Maybe it's because I've been stuck in a single place for too long that this unsolvable problem has appeared inside of me? If they really were the Skaters Brigade, then their experience may help me solve this dilemma of mine.

With that in mind, I accepted their challenge happily. The young man in front of me showed a stunned expression, as if surprised by how happy my response sounded. But soon he adjusted his mood.

"The performance evaluation system will be based on the scoring standards issued by the Gloriville Skateboarding Association."

"This place will be the start, while the west area of the city is the goal. We’ll have to go all the way and show the best of our abilities.”

The man explained the rules.

"If you win, you’ll earn a spot in the top three of the world’s best skaters. How does that sound?”

Even if I win, it’ll only be top three? I showed a playful smile.

“Not that good, actually.”

"Are you scared?" The young man narrowed his eyes.

I won the competition, but also lost it. I easily won against all the members of the Skaters Brigade, but my problem still hasn't been solved.

“Never heard of anyone having the same feeling you do.” The young man shook his head confused, then changed his expression in one of expectation.

"Even with the difficulty at its peak, you seem to be doing very well. You really don't want to join us? Think about it.”

“Sorry, but I don’t think I can accept your proposal at the moment.”

“Maybe there’s a way around it?”

The man kept trying to persuade me.

“You… haven't traveled a lot, have you?”

The skaters left with regret. I kept on practicing.

I was more and more distressed as I rolled through the familiar streets and lanes. I almost started feeling sick. Unconsciously, I came to a square, where a lot of skaters would usually gather to practice. But today, in the square had gathered a large number of people.

“Is there an awesome guy practicing?”

I stopped, and squeezed myself in the crowd to reach the center.

I've been thinking about my problems for way too long and my head was aching. Watching someone else practicing would help me relax. Thinking that, I finally arrived at the center. Unexpectedly, there wasn’t a skater performing on his skate before my eyes. It was young man with an electric guitar playing and singing loudly.

"♫ The journey’s steep, the courage’s too little, hesitating, and not running fast! ♫"

Exciting music, accompanied by rhythmic rap, seemed to be capturing everyone’s soul. I unconsciously started to dance, and my heart seemed to want to jump out of my chest. After singing, the boy put down his guitar and held up his microphone.

“Thanks for listening! I'm Cola! Now,  let me bring you one of my original songs "Rock'n'Roll, Hip-Hop". "

The crowd got fired up again. I tried to keep calm by holding back that fiery feeling. For a moment, I felt like I suddenly understood something.

“Maybe… he’s the one who can help me with my problem.”

From that day on, Cola would come to that square to sing every day. And I moved my skateboard training  to that place as well. We became friends of another kind. We didn’t communicate with one another. But we could feel each other's emotions. Whenever I drove with my skateboard up in the air, Cola's melody would come to a climax. When Cola's rap became faster and more exciting, my moves became more dazzling. That knot in my heart was gradually untying itself, somehow. Such days lasted for nearly a month. But then, they came to an abrupt end. I got stuck on the last threshold. As expected, there was no way I could understand where that depression came from just by feeling it vaguely. So the day after I discovered the problem, I broke my bond with Cola. Instead of starting to practice, I walked up to him with the skateboard in my arms.

"Well, there’s something I have to ask you… "

I told him all the troubles I’ve been having lately, along with that unclear feeling which haunted my heart. Cola frowned and thought for a while, then asked me a few questions, and then he smiled.

"Not a big case, I know what your problem is. "

"But, if you want to solve it, you have to come to my last show with me. "

"Come to the last show?”

I was a little confused.

"YES! It's going to be different from the previous ones. Let's do this together this time. "

Then he pulled me to his microphone.

He said. When the music started, I unconsciously danced to the beat. With the skateboard under my feet, I began to show my skills recklessly.

“What is it… what’s the difference?”

I frowned as I kept dancing, beginning to understand what Cola had meant. Soon, I understood my problem. Because it was a real cooperation, and not just casual accompaniment, I found that I couldn't be as random as my usual self was. The action mustn’t be too long, otherwise it will not match the rhythm. The pauses mustn’t be too short, or the beat will be disordered. Cola's emotional melody seemed to be guiding me. Instead of following his imagination and instincts, he devoted his heart to the performance to show the true meaning of his songs. And I finally woke up in the process. I understood what he had meant. I had found what I’ve been lacking.

It wasn’t that so-called coordination, but…

By focusing too much on technique and only trying to win the audience's applause with a better performance, I lost sight of the most essential and simple of things. My skateboard was now on the way to show off. At the end of the song, I stopped and held Cola’s hand.

Cola was still immersed in the aftertaste of rock and roll, then he finally smiled to me.

"Are you interested in playing more brilliant songs together? "

“Don't you think you still have a lot to learn? "

Gloriville is a country specialized in business with many sides facing the sea. Along the prosperity of imports and exports, there are also emerging industries. Here, you can catch a glimpse of both old-fashioned Chinese clothes, as well as modern mechanical weapons. Whatever is that you’re looking for, Gloriville has it. Skateboarding is a very special sport popular among Gloriville’s youths. It started with surfing. Due to the arrival of fallen angels, people's range of activities on the ocean has decreased drastically, and surfing has gradually evolved into skateboarding on land.

Midgar had two new visitors today. Driving the skateboard, flying and dancing in the air, Hamburger performed several extremely difficult tricks in a row, attracting the attention of pedestrians on the street. Behind him, Cola walked slowly, carrying his guitar case and stereo. Hamburger spun around and ran back to Cola

"Did you see that? Feels good to have finally overcome that issue. Thanks to you, I'm more comfortable now. "

Cola sighed after looking a bit helplessly at Hamburger.

"But, don't get too excited, or you’ll forget the purpose of our trip. "

Hamburger smiled and then pulled out a fancy flyer.

Cola sighed again, then pulled an invitation letter from his pocket.

"There is also this invitation. "

With this, Cola opened the invitation letter again and looked at the invitee, which has been crossed off and rewritten several times, and talked to himself a bit confused.