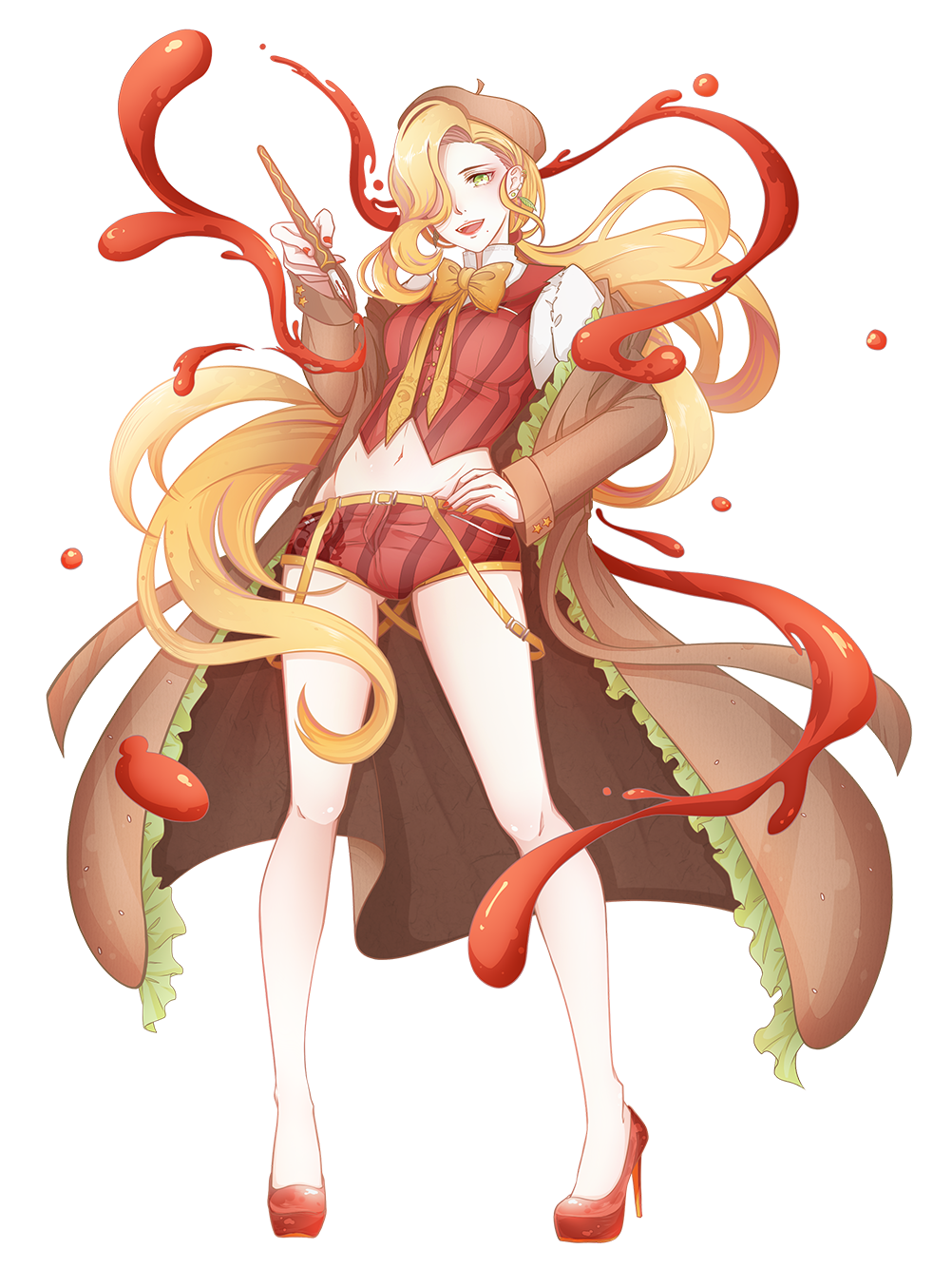 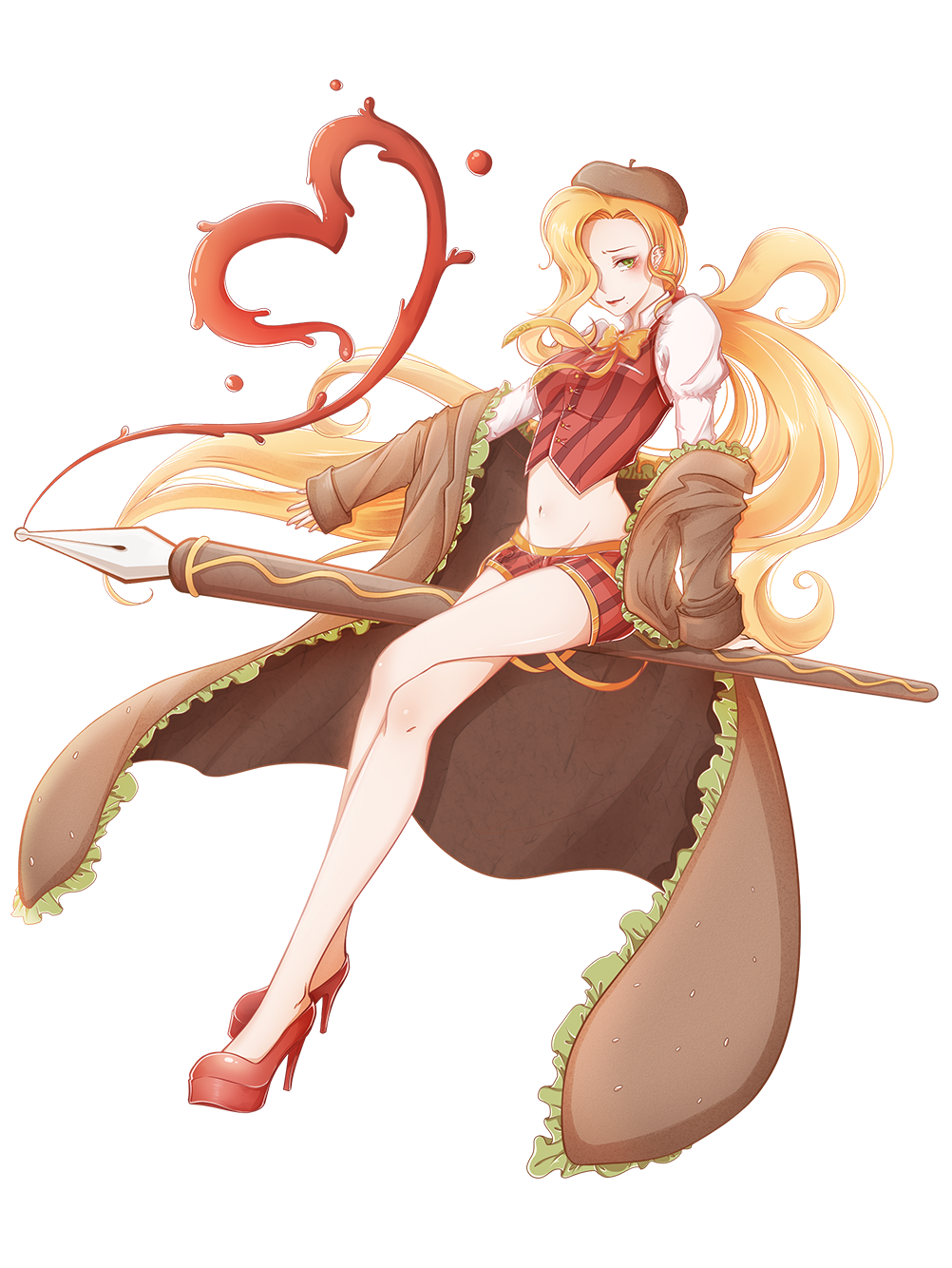 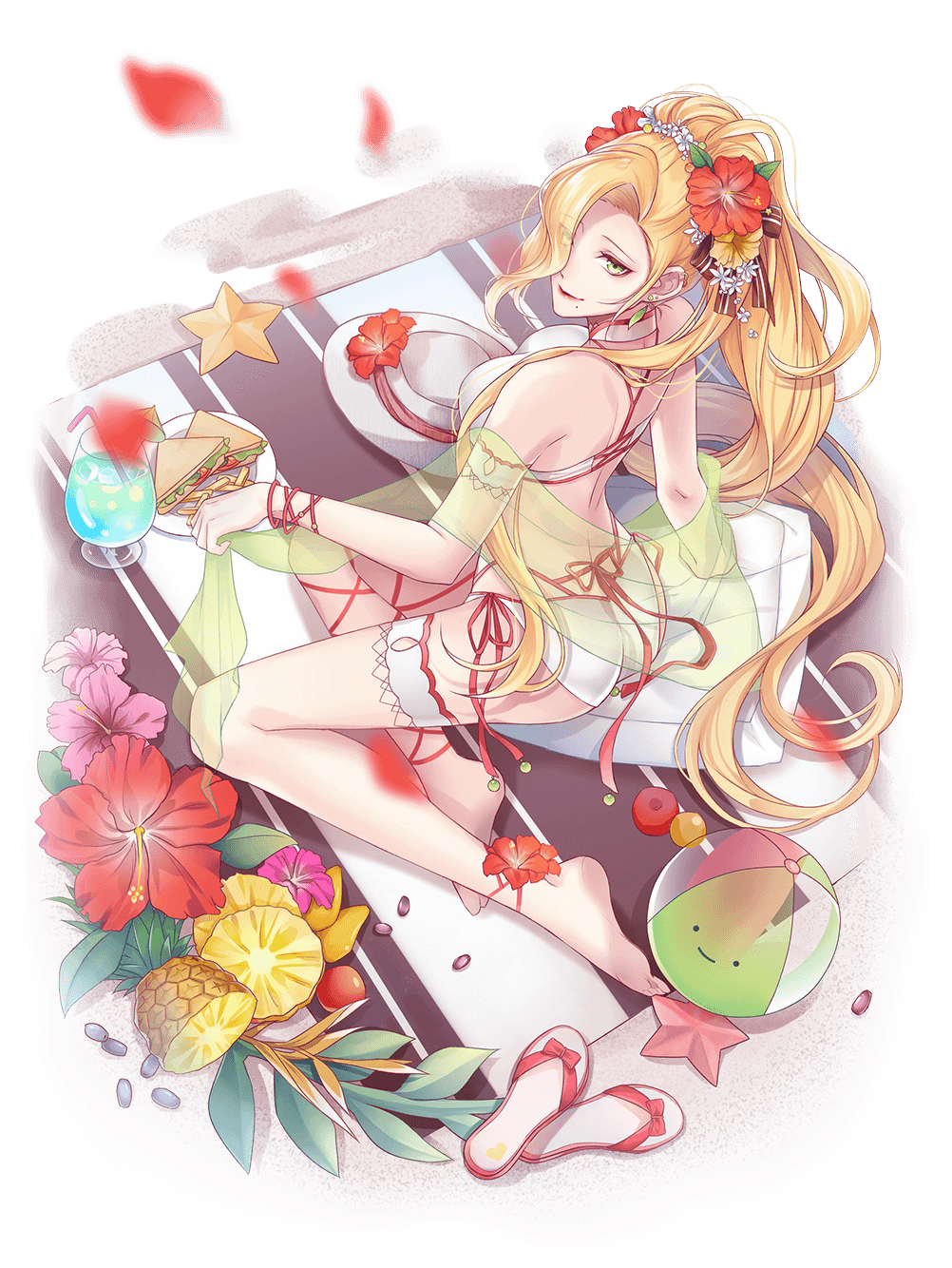 She loves all the beauty in the world and is a talented painter. She is admired by many young people for her smooth hair and elegant facial features. However, she can also be quite stern and unforgiving at times.

Hot Dogs are a common snack around the world. They are simple yet beautiful with their colors of yellow and red. 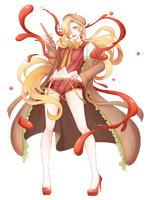 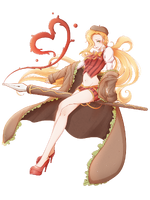 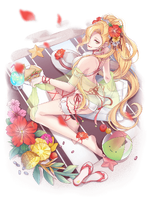 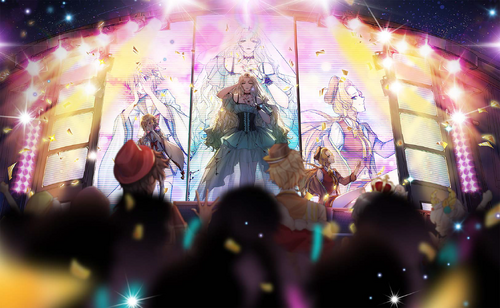 From 1st Anniversary PV. (with Dorayaki and Bloody Mary.)

II. By Your Moods

"I'm sorry, I only paint for beautiful people."

Looking at their face and smiling I turned down the person's request for me to paint their portrait.

Their face, already free of beauty, became distorted; its owner made a noise that struck me as particularly unpleasant.

"Impetuous scoundrel! Do you know who I am?"

I gently pressed against her brow with my brush, interrupting the slap that would have struck me in a second.

"But even if you're the sister of the King..." I began to brandish the brush in my hand, and left a mark on her face that I thought was very fitting.

"I simply cannot make an exception."

With a final stroke I paused to admire my Master Attendant piece, then turned and walked away.

I was soon followed by screams from the arrogant Princess.

"You despicable Food Soul! You DARE to paint a fork on my face!"

How long has it been since the day the Cooking Attendant who summoned me passed away?

Ah, my life is too easy here, I can't even remember the days.

This really is a wonderful world~

With wonderful scenery, delicious food, and many human beings with such beautiful skin.

And there were countless things for me to paint.

However, sometimes there are problems.

Every time I finish a painting, I give it to someone. As a result, more and more people in human society are beginning to know of my existence. Many people who track me down just for the sake of obtaining a painting done my own hand.

But I don't want to paint just anything for my collection~"

II. By Your Moods

What kind of person is qualified to have a portrait done by me then?

Well, I don’t know exactly. If I had to say something, it might have to do with my mood at that moment.

If I'm in a cheerful mood, a pebble on the side of the road can strike my eye as being as brilliant as a diamond.

If I'm feeling gloomy, even if the most beautiful woman in the world was standing in front of me begging with bedroom eyes and a voice like music I might still turn her down mercilessly.

After all, if there is no love in my heart when I pick up my brush, there will be no emotion in whatever I paint.

And love is born more easily in a happy heart.

It really is a headache though, and sometimes things are just beyond my control.

Like this time for example, it was clear that I had rejected the royal family, but the messengers they sent over and over again were hindering my daily life.

When those soldiers appeared before me again, I sighed helplessly and said:

"I guess I'm going to go see her highness again."

Class distinctions in human society are really a pointless arrangement. I looked around at the grand furnishings and thought about the small wooden homes where my painter friends lived.

They are obviously talented people, but they have a hard time even earning the bare essentials, while so much of the kingdom's money is spent supporting these utterly shallow people.

Ah, sorry, even shallow might be a bit too generous a term.

I looked at the Princess I had met a few days ago; today she was wearing even more make-up. I sighed.

"A few days ago you painted a fork on my face, and it is time I settled that matter with you."

This "grand person" assumed a proud bearing, and looking down at me from her high seat said to me:

"However, I have recently heard that some of the houses in the town are really quite dangerous."

"They have not been repaired in many years, and many people in the surrounding homes are constantly worried they might collapse one day and take their own homes with them."

Intentionally or not, she watched my face for my reaction while she said these words; naturally I knew what she was getting at, so I didn't respond, waiting instead for her to finish.

"Of course, you Food Souls are spirits and have no need for things like shelter or sustenance. However, human beings do require such things."

"So, what do you think, should I have these homes torn down, or should I assist their owners in having them repaired?

I could see it all too clearly; if at this moment I once again refused the request, my poor painter friends could lose their homes.

I turned the matter over and over in my mind until I came to a decision, so I opened my mouth and said:

"It would be my honor to paint your portraits."

"Ahaha, good. You know, if it wasn't for your unique talent as a painter, you would have lost everything for what you did a few days ago. I am very pleased, you've made a wise choice."

I then entered the palace and spent day and night painting for the "noble" Princess. Whether it was her sleeping, or her eating, or her handling her official duties, I painted portraits of her meticulously and put them into an album.

The Princess was very pleased with my work, and she was delighted every time she saw a new portrait; she would have each one mounted and placed on the wall of her bedroom.

Time passed, and the once young Princess began the march into her twilight years; I looked at her face, now full of wrinkles, and I continued to paint her as she wished to see herself.

Before long, the Princess had turned to dust and returned to the soil. I successfully escaped the palace and tasted freedom for the first time, so I went to see my painter friends.

It's such pity that I didn't get to see them one last time, but the lives of human beings are just so short. Standing in front of their graves, I was filled with regret.

At the princess's command the broken homes where they had lived were rebuilt so their descendants could live in comfort.

After I had finished sweeping their graves clean there was nothing keeping me there, so I set out on a journey to discover new things of beauty.

Many years later, when I had again met a few like-minded painter friends and told them something about this matter, they told me they were very sorry for me, and it was a pity that I had spent so many years trying to use the talents I was so proud of to please a woman who did not want to paint.

"Well, now that you mention it she was very happy~" I said casually playing with my hair.

"But until the very end she could never see that the paintings I paint are false. It's very sad."

When I promised to paint for the princess, part of the reason was concern for the plight of my fellow painters, but mostly it was because of my own selfishness~

That princess really was a pain; if I had refused her, she just would have come after me again.

So I had no choice but to do what she wanted~

Of course, she also had to pay the price.

Which of my paintings do human beings feel is my most charming?

My captivating depictions of feminine beauty? No~

Or could be my unearthly landscapes? Nope~

Humans always believe only the things they want to believe. Once you understand that about them, it's not hard to paint the most beautiful painting in the world for them.

Although those paintings aren't worth a jot as far as I'm concerned, those human beings can spend a lifetime lost inside them.

She believed she was as beautiful as she was in my paintings, but they hid all of her ugliness; in the end she even denied the existence of a mirror in the scope of her actions, spending her life in the "false paintings" I had created.

In the year 296 of the King's Calendar, the Cooking Attendant who had summoned Hot Dog died in his sleep; Hot Dog, finally free from the necessity of obeying commands from a human, decided that she was going to live her life as she pleased.

She found herself unable to ignore the beautiful and dazzling things she encountered during her journeys; there are were many beautiful things in the world, and Hot Dog wanted to surround herself with them all. Her inability to do so filled her with distress, until she discovered a certain human art.

That art was called "painting."

Hot Dog picked up a brush like an explorer discovering a new continent. She insisted on practicing every day and night so that she would be able to accurately and fully capture everything she had seen and heard through her painting.

At long last, after passing countless days engrossed in this work, too busy to eat or sleep, her astounding painting abilities were second to none.

After that she brought her favorite brush with her so she could paint the many things she encountered on her solitary journeys; however, she was different, and she no longer had the same desire to keep all the beautiful things she saw for herself.

Instead, she was more willing to help preserve the appearance of those things that moved her.

Because of this, when she finished a new painting she would often leave it in the same spot.

Over time, more and more human beings discovered her, and she developed quite a reputation.

However, trouble was not far behind.

If anyone stood between her and her freedom,

they would pay dearly for their mistake.