Light Kingdom is the second region available in the game. It is unlocked at level 15, once you have completed the normal stages of Gloriville.

Although humans lost the elves’ protection and later became stronger, the Light Kingdom region, located in the northeast of the Knowles continent, was the first autonomous region formed by tribal groups. At the end of the war era, to ensure integrity of its land, a national system was built in advance.  Unlike humans in other regions, people here used the dreaming power to create gods; they became the leaders of Light Kingdom. But the gods of Light Kingdom usually live in human form. The sage, known as the god's nurterer, spent his entire life to nurture them. Because the lifespan of these gods are infinite, every four hundred years a new god will be selected to reign over the kingdom.

Light Kingdom is located northeast of Knowles. For the high altitude, there are often mists and fogs. Light Kingdom produce rich agricultural products with a long tradition of livestock husbandry, providing a good foundation for the locals to set up a chef guild. 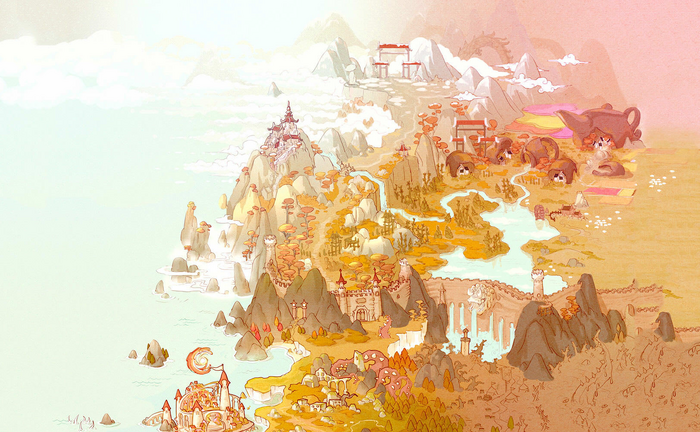 Thanks to the mountain peaks surrounding the west and the back, there is little conflict with the neighboring countries. With its prosperous local food culture, it has secretly worked with the Academy. With all these benefits, Light Kingdom was the first in the region to found a Chef Guild.

Nozokyo is located on the hilltop of the Light Kingdom border and opposite Tamakyo. Nozokyo is a place for sacrifice in Light Kingdom. Every generation's deity is born and raised here.

Spring Town is a larger town in the heart of Light Kingdom. It is home to bamboo products and tea. The water for making tea is from the hot springs of Light Kingdom; it is sweet and delicious.

Lake of Glass Jar is the largest inland lake in the entire Knowles continent. It’s been given this name because it looks as if a crystallized jar from above. The lake was formed in the early days when flooding was a regular occurrence. Thanks to the White Tiger, the lake has been stabilized.

The Floating Platform, which is built on the southern tip of Lake of Glass Jar, is the main building in the center of Amagi. In addition to the the White Tiger’s sword, the giant stone beast statue also gives people a strong sense of fear. The Floating Platform not only functions as a defense against Fallen Angels, it also works as a water dam.

During the Fallen Angels' reign of havoc, the deity known as "White Tiger" led the locals to join together to defend against the Fallen Angels' threat. Amagi extends from the east to the west and connects the eastern and western mountains. The tallest point shoots well above the clouds. The Light Kingdom locals have started calling it Amagi.