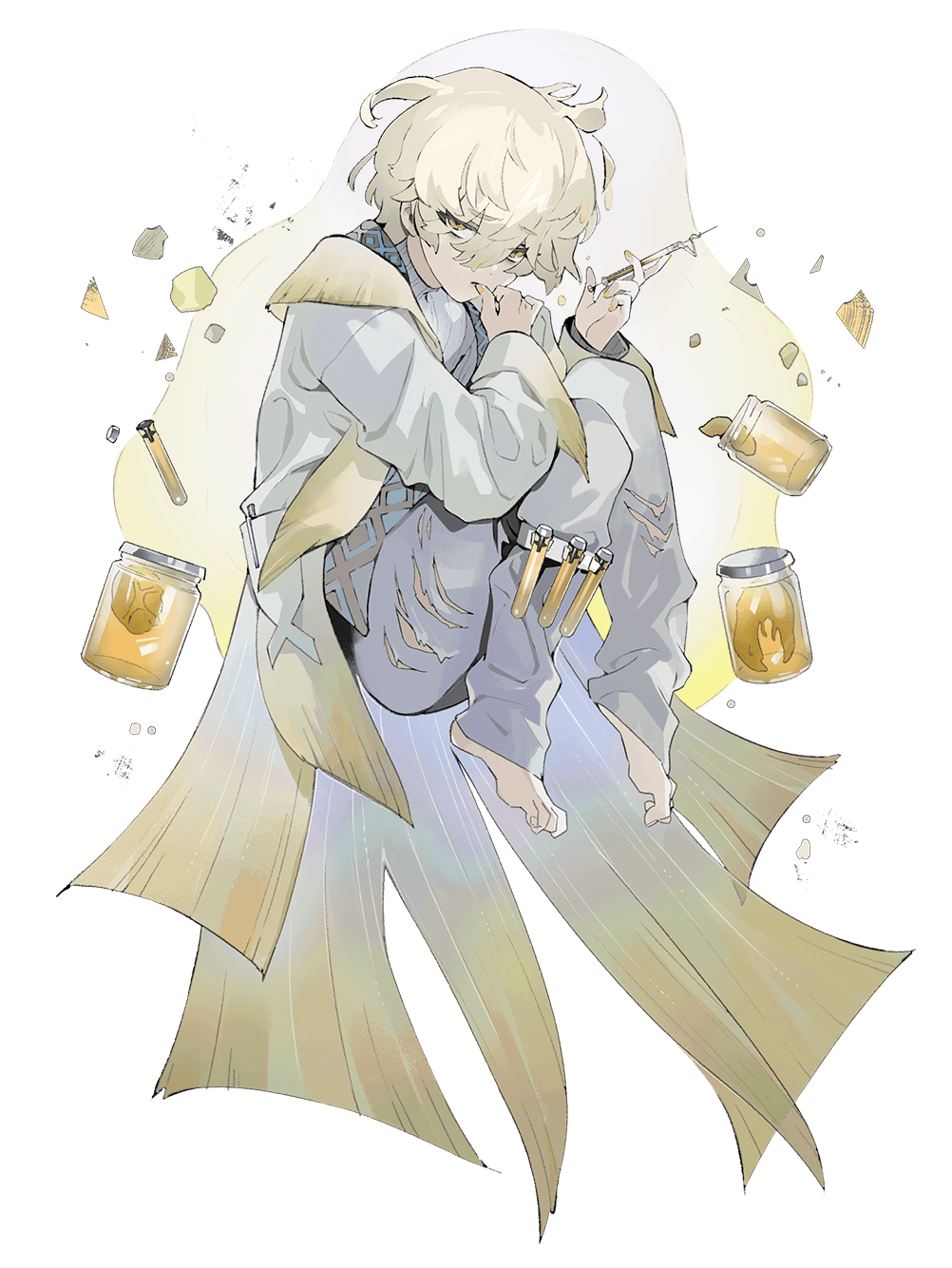 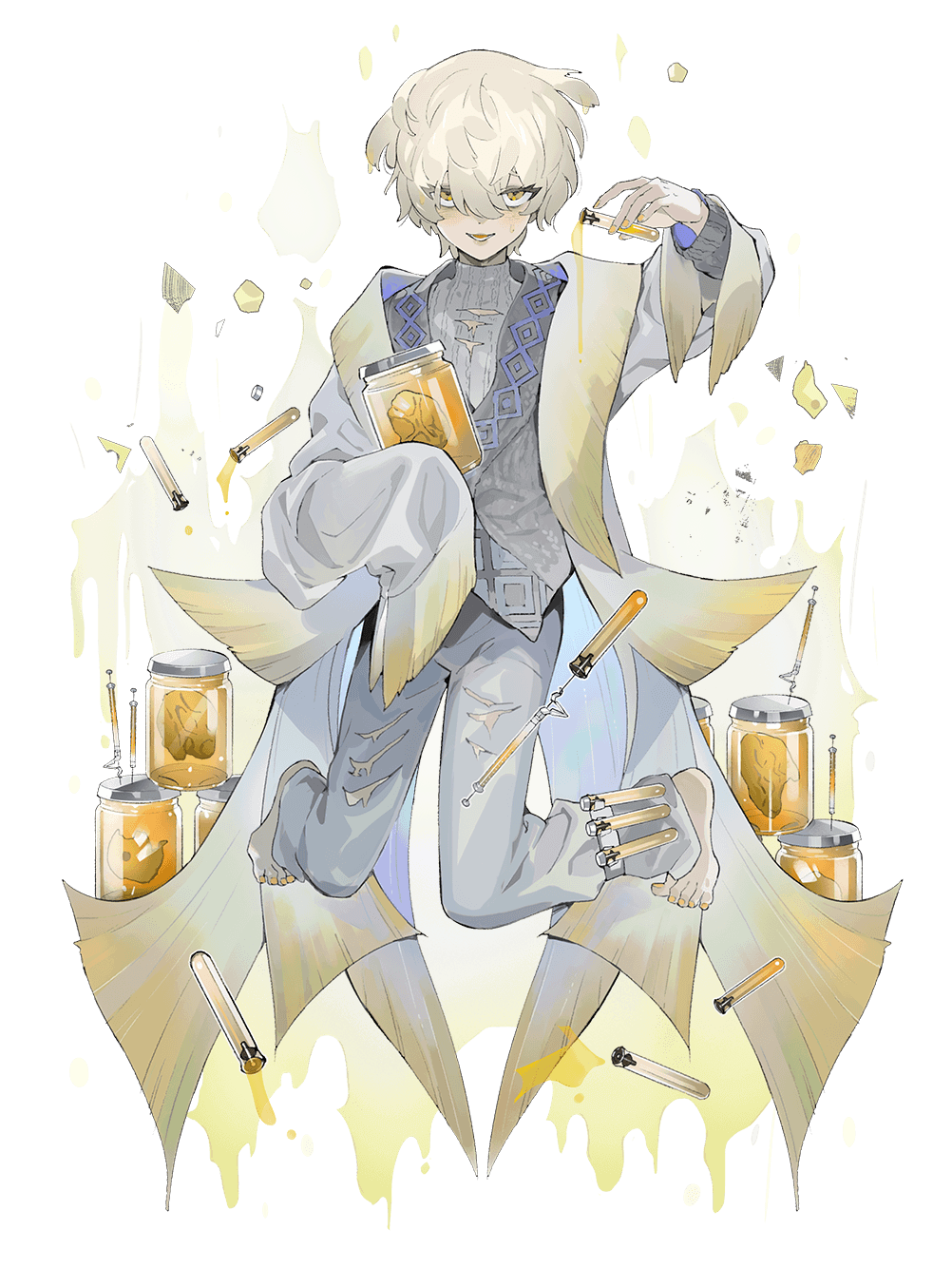 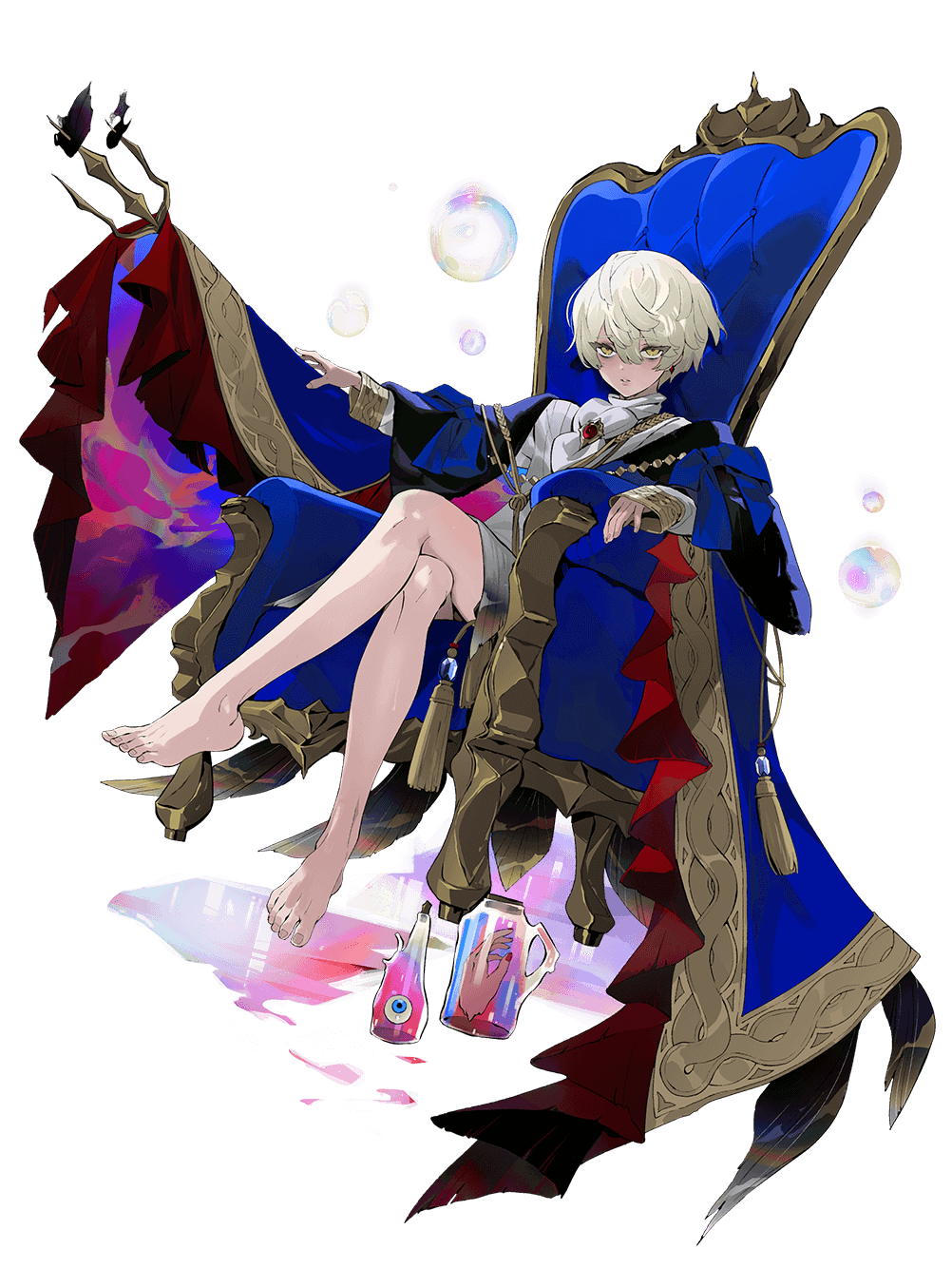 Lutefisk is one of the seven teachers of the Food Soul organization "The School", in charge of pharmaceutics. He is somewhere between genius and madness, and whether he does good or evil is totally up to the guidance of his peers. When his emotions run high, he will unconsciously give off a corrosive liquid all around him, for which he has been excluded and rejected before. He has intense inferiority and anxiety issues, and he believes that the only things that don't hate him are dead things. Champagne arranged an independent laboratory for him in The School, and the specimens soaking in there are all his "students" whom he gives daily lectures to.

Lutefisk is a food prepared by soaking fish in a strong alkaline solution of sodium hydroxide or potassium hydroxide. The finished product has a pH value of 12 and is strongly caustic. The protein is broken down by the base solution, and the meat swells into a large gelatinous substance in its completed form. After pickling in the alkaline solution, the lutefisk must be soaked in plain water for one week. If this process is not done, eating it will result in chemical burns. People with gastric afflictions can have serious pain from eating lutefisk, so please be careful. 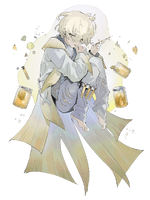 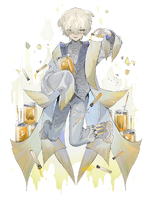 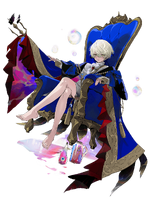 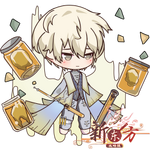 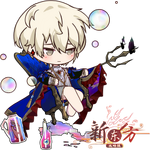 Only the desk lamp is still on.

Attendant woke up at midnight again.

What should I do… He seems… suffering…

Don’t know what Attendant is finding.

He opens the drawer.

Something is shaking, shaking, making noise of small things hitting each other.

Attendant is a doctor, he always knows what the illness is, and knows what medicine should take.

I can take it easy now.

Not looking through the keyhole anymore, I sneak back to my attic.

Outside the window, the sky is strange, it’s black, but also yellow.

Why do my eyes keep coming out of that weird liquid again?

Corroded the floor, when sunrise, if Attendant found out, I’m gonna be scolded again.

I’m afraid to close my eyes.

Closing my eyes will come out more liquid, it cannot stop, there’s no way to stop.

I should wait for the sunrise, apologize to the Attendant before he knows.

How long do I need to wait……

Sunrise, is it always able to wait for it to come?

I waited until the sunrise, Attendant didn’t.

Attendant’s doctor colleagues are wearing white coats, they are working around the Attendant, until they put him in a body bag, lift it out of the house, and don’t even have time to look up.

The contract broke, if I wanna know where is Attendant, I can only follow them.

Following them to the hospital, this is the Attendant's working place.

Attendant has put in the mortuary, his colleagues leave in a rush.

How could they leave Attendant in this kind of dark place alone?

Hiding alone in the dark, those who didn’t learn it must be afraid.

But, Attendant you don’t need to be afraid.

I can teach you.

If, if you aren't afraid anymore, can you hug me?

The nurse screams and runs away.

I look at the quiet Attendant, can’t help but bite my nail.

It seems I can only go back.

I go back home.

The house without an owner became quiet.

I can get out of the attic during the daytime.

No one stops me.

No one disgusts me.

I step on the floor barefoot, I don't need to worry that someone will scold me.

Back and forth, I walked in the house several times.

I walk into the bathroom, lay inside the bathtub, fill it with water, with this, I become a fish.

Swim in the ocean, swim in the sky, I can swim wherever I want.

When I’m tired I just sleep in a bed that I haven’t slept in before, I don't need to worry that someone will kick me off suddenly.

I open my eyes.

There is a little girl at the bathroom door.

“Jenny, don’t run away by yourself… Where are you?”

I run away through the bathroom window.

It was already 2 months later.

Attendant’s house sold to someone else.

The new householder is a family of three, they changed all the furniture, painted the wall again too.

I hear them laughing in the house

The little girl leaned on her mother’s belly, Ah…… They’re going to have new members.

I sneak out through the window.

Why does everyone look like they are living well…..

Only me… living terribly……

In the hospital, everyone is busy, no one will look at other places.

I only need to hide well, and I can live here forever.

But sometimes I made mistakes too.

In the hospital, there is an old staircase, the exit has been blocked, normally no one walks through.

In the evening, lights will shine through that broken window.

I will hold on to the chance to look at the sun.

Don’t know which doctor, or family dependant, was drunk in this place last night.

I didn’t notice, I hit on them.

The wine bottles make a huge noise, attract the nurse to come here.

I run into a ward.

I squat down at the corner of the ward upsettingly, on the bed, a familiar girl widens her eyes, staring at me.

…… She’s the… girl… who moved into Attendant’s house……

I shrink my body.

How can I run away……

Talk… What can we talk about?

“Are you the little fairy who lived in that house?”

“I saw your stuff… I ask Mom to keep them! They’re still in the attic! When will you go back to live there?”

Ah, I must, I must be misheard that.

How… How is it possible that someone is waiting for me……

She brings a candy jar to me, I’m scared and hit on the wall

She tries to grab my hand, but once she touches me, she withdraws immediately.

Me, this kind of being… Those who touch me… will get hurt… No matter her… or Attendant… or everyone else… They are not hating me for no reason……

This kind of being like me, shouldn’t exist in this world, right?

When she holds her hands, I run away.

The world that I exist in and I didn’t become friends.

But I’m the most useless villain all over the world

Even though I know that I’m not allowed to have something, I’m still fascinated by many things.

I wanna walk under the sun, between people.

I want me to have no wandering, no being kicked out, and no one scared.

I want a house, it’s okay if the floor didn’t look good.

Only a house with a family, a bathtub, a window with sunshine.

Can’t help but I went back to the girl’s ward.

When no one notices me.

What about her parents?

I didn’t saw them.

Eyes are closing, she is sleeping, but can’t stop her tears, I know, she is really sad.

I stare at her quietly, but I can’t help her to wipe her tears.

So I can only leave secretly.

She is the one who wanna be friends with me, I want her to be good.

There is an unfamiliar smell everywhere.

I haven’t left the hospital for too long, the smell of this town has changed.

Looking at the almost empty street, marks of gun and sword.

I had a bad assumption.

As expected, when I get to the Attendant’s house, it was already covered by dust.

Why that kind of nice person…… Will be abandoned too……

Right… What about her?

Did she know this?

Back to the hospital, I sit next to her bed and put down a bunch of candy jars.

It was found in an abandoned store on the way.

She hides her disappointment, smiles at me.

“This morning, sorry, I scared you away again.”

Should I say something?

But I’m the one who did wrong.

“Little fairy, can you stay, actually I wanna ask for your help.”

What? Can I even help her?

“I can’t hold on anymore. But I'm really afraid.”

“I don’t wanna eat by bugs after I die. Little fairy, can you help me?”

Ah… What… is this weird request……

I look at her pale face, my sight colored by yellow again.

No…No… I… is this even happiness… or sadness?

Lutefisk’s Attendant died by suicide due to depression, without any last words.

Only Lutefisk saw that the night he died, he wrote many words again and again, but destroyed by himself at last.

He hated Lutefisk, just like he hated the sensitive and self-abased him inside his mind.

And he just locked Lutefisk inside the attic, he thought that he could not need to face his mind again.

But he didn’t save himself with this in the end.

Only left a food soul that was sensitive and self-abased like him.

Because when Lutefisk became emotional, he will release corrosive liquid around him and hurt others.

So, he always felt strongly self-abased and anxious. Finally, he thought, he can only worth to be liked after something died.

He wandered around the town hospital that his Attendant worked at, in hindsight, he found out that war had already started in this country.

First, many townspeople ran away, then, the hospital’s workers left one by one too.

The family that lived in his Attendant’s house, had to face the brutal reality during the war.

——Their daughter got an incurable disease, if they brought her to run away, she would live shorter without a continuous cure.

And the mother of this family just gave birth to a new healthy baby.

And they just made a cruel but reasonable decision.

After knowing this, Lutefisk stayed with the little girl for the last part of her life.

He used his way to keep the little girl’s look after she died.

Later on, the war finally ended.

But the town was still empty.

Residents and animals in the town were all gone.

The hospital only had Lutefisk alone.

When he is bored, he will fly between rooms.

Seeing what else left in those empty rooms.

In the first room, there was a dried fruit basket under the bed.

In the second room, there was a music box left under the bed, it will play music at a certain time.

In the third room, he found a love letter under the bed, left by a soldier, had never sent out.

He knew that this situation wouldn't be too long.

Sunrise can always be waited, no matter how.

There are always new, joyful people who will move in and fill this town again.

Later on, Lutefisk’s thought had been verified

However, when this town became crowded again, he couldn't behave as usual, wandering at the hospital.

Because the new king, Champagne, noticed there is a legend that a ghost was wandering in this hospital, he sent someone to catch him.

Because of his talent in medicine, Lutefisk got into “School”

Under Champagne’s arrangement, he got an independent lab, became a special “Teacher”.

He got a lot of “students” to stay with him, as he wished, they are obedient and quiet, Lutfisk really likes it.