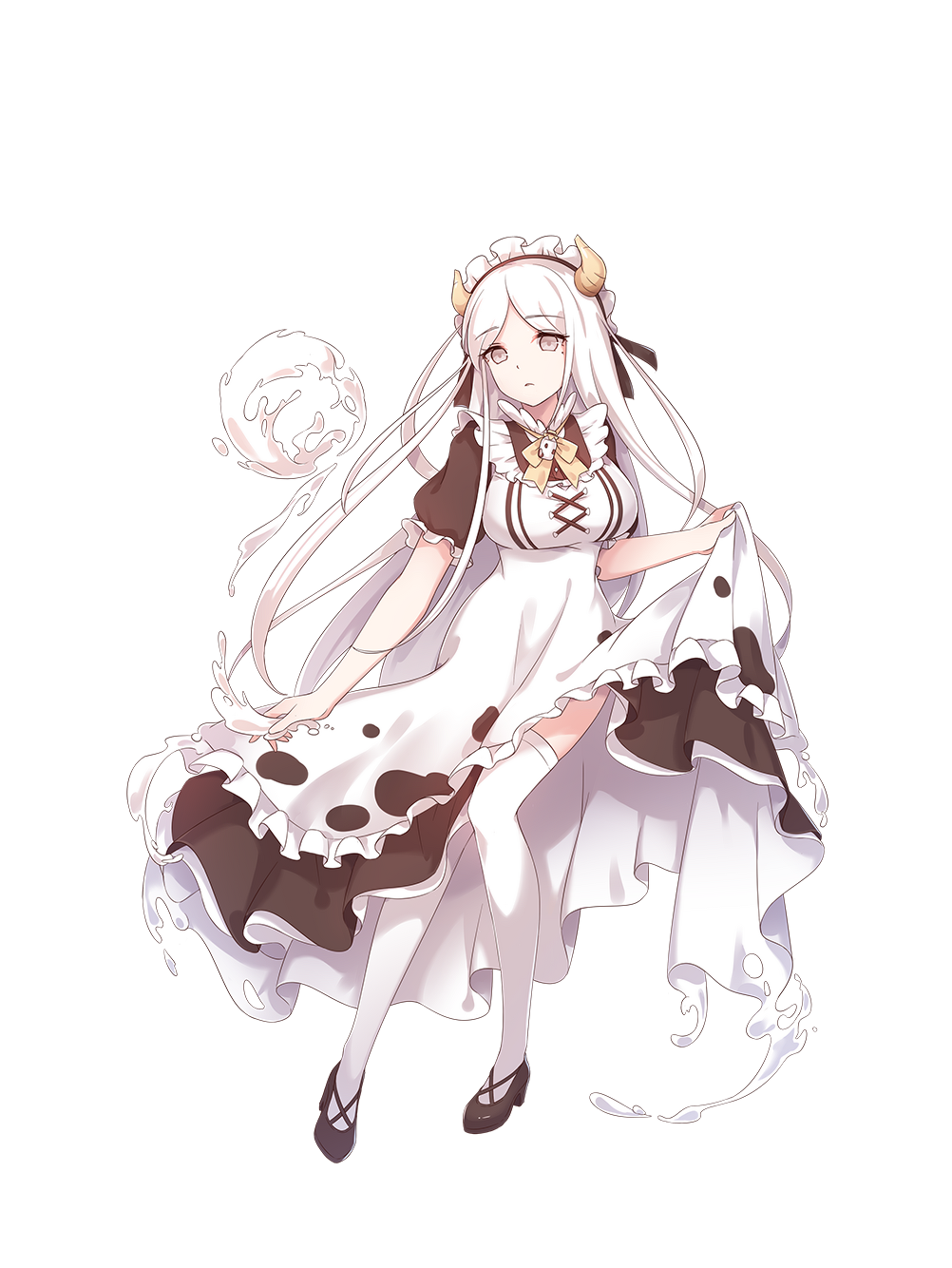 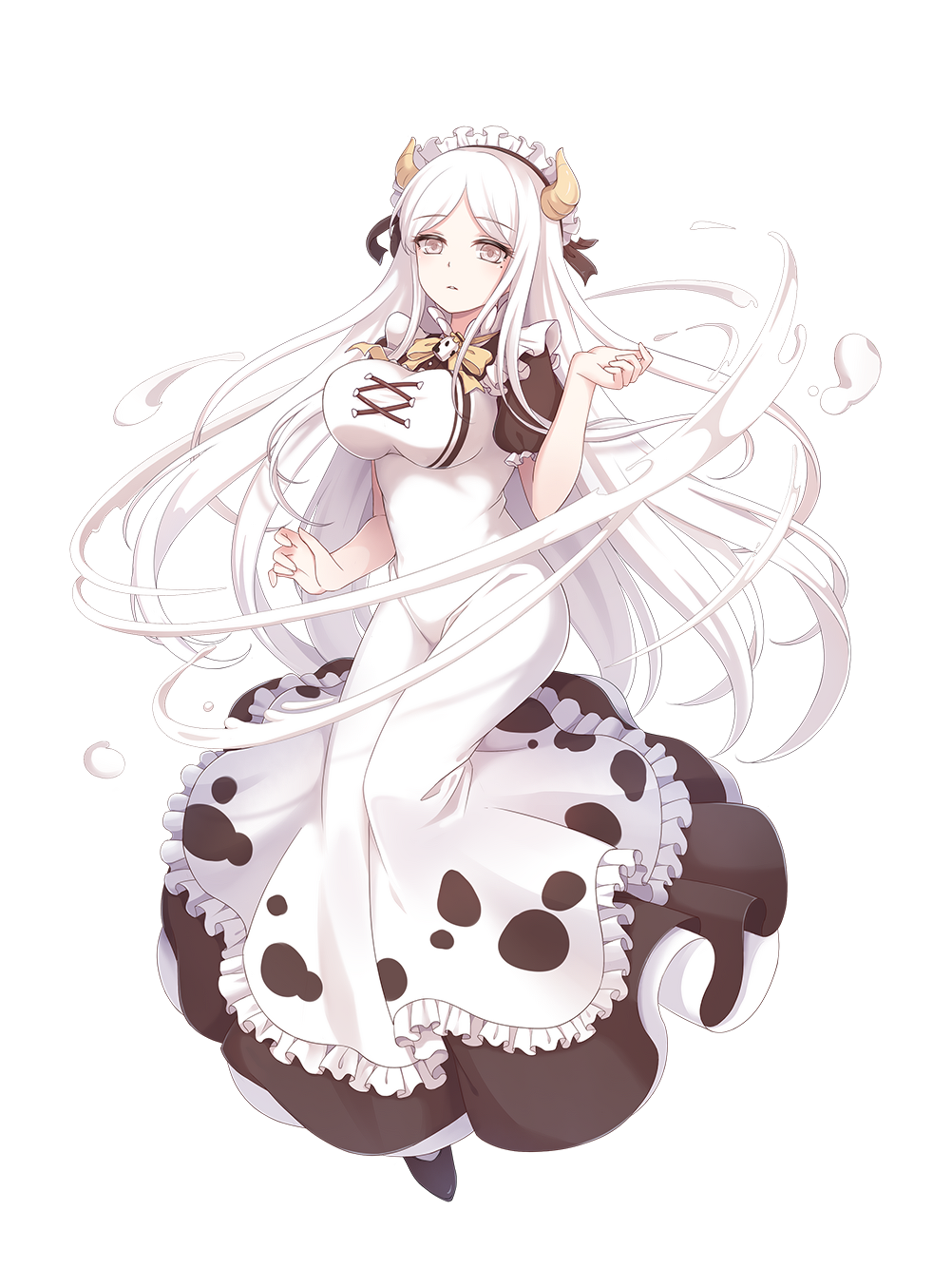 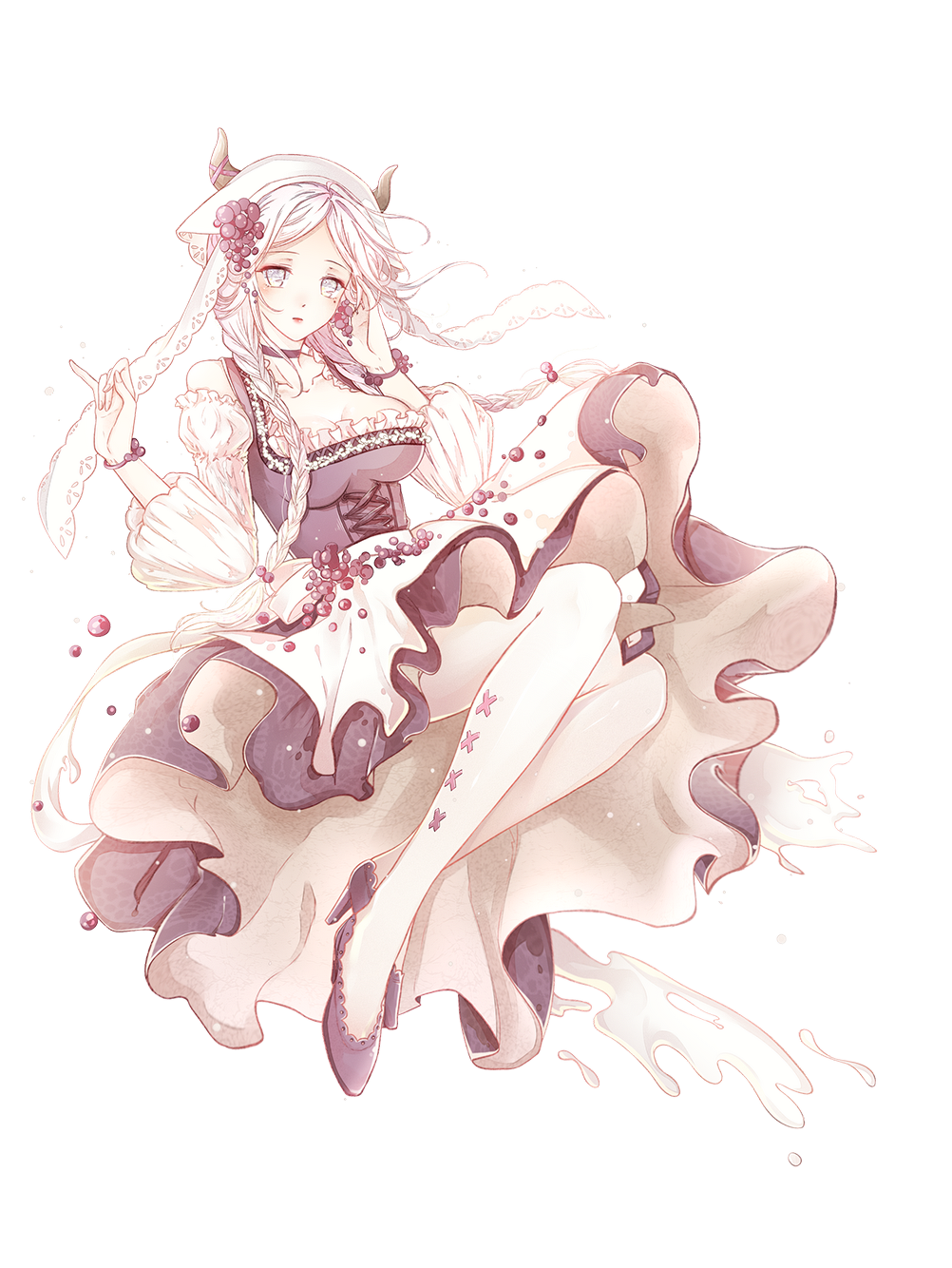 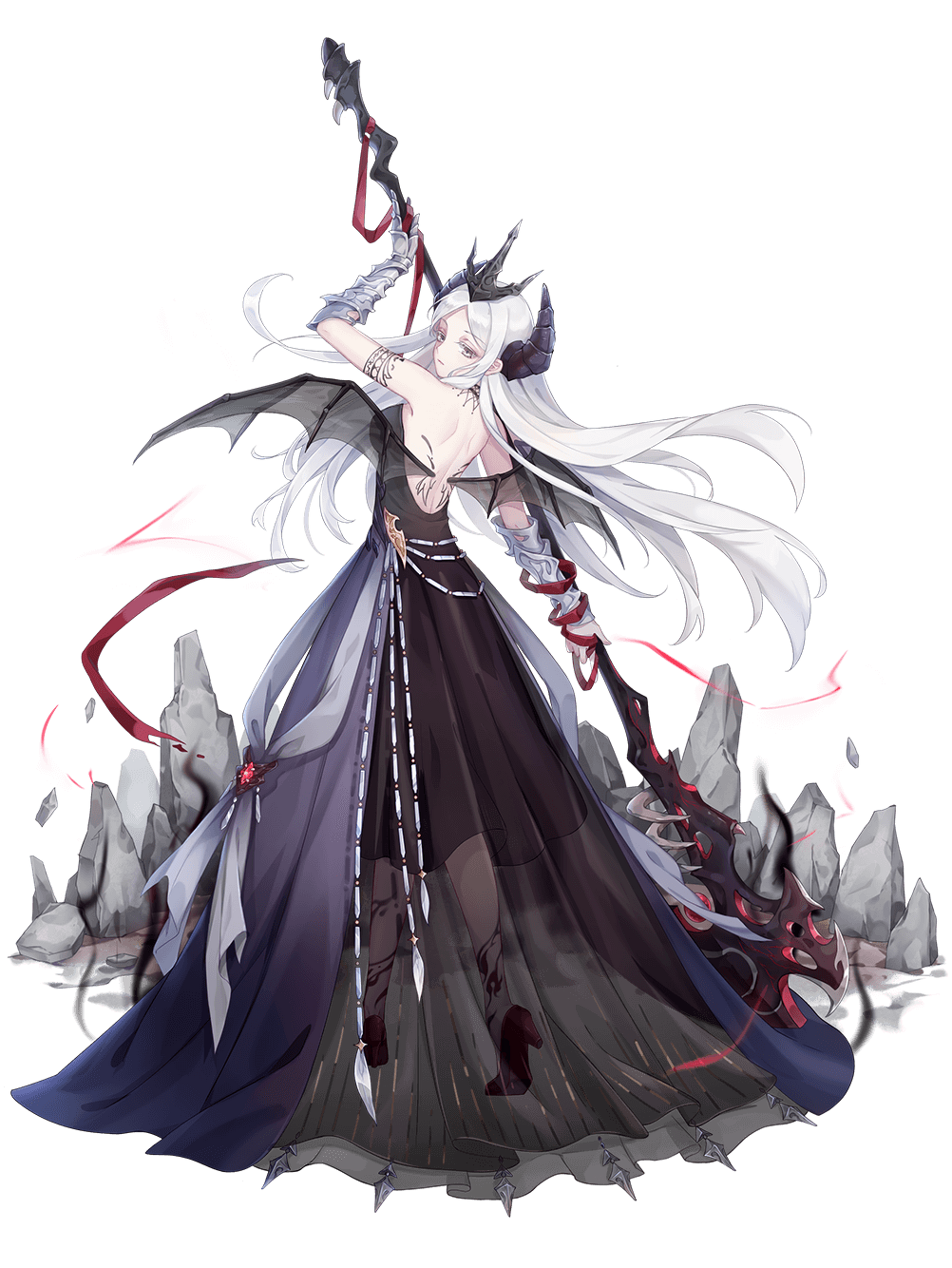 A quiet and reserved Food Soul. When a friend is in danger she will come to their rescue. However, she's not very patient when it comes to dealing with everyday matters.

Milk can be found all over the world and can be used in various ways. However, don't leave it outside for too long or it'll go bad! Also, they say it goes well with black tea. 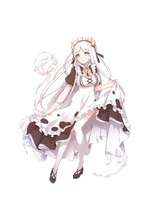 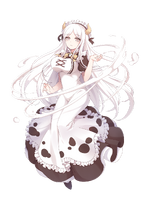 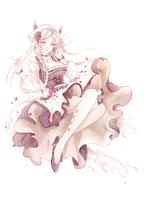 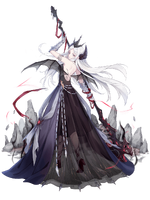 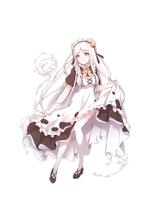 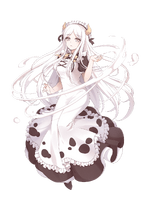 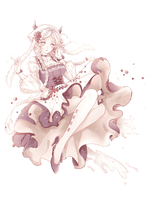 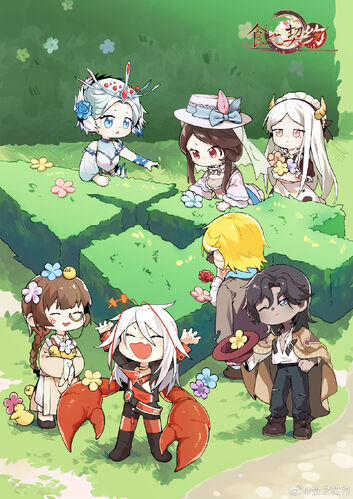 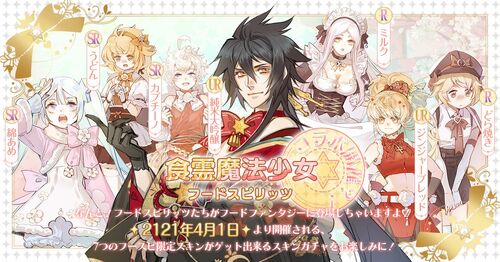 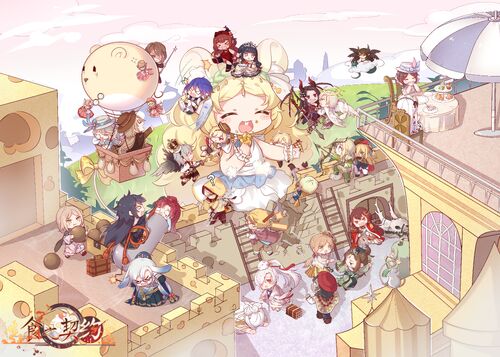 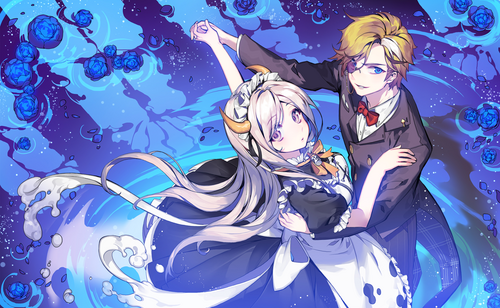 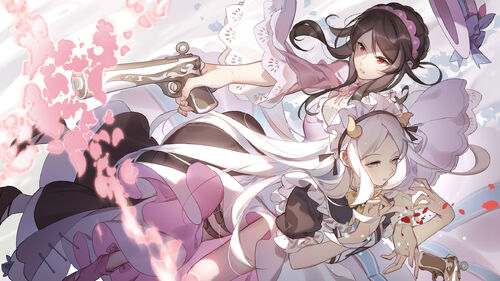 Note: this story has been grammatically edited by UnknownPeep. Some of the original wording may have been altered to make the story easier to understand, but the story remains unchanged.

I. Start of It All

I. Start of It All

Though I knew all along that he was a rash and whimsical Food Soul who would never think about the consequences of his actions, I never would have thought that he would actually open a coffee house called 'Satan', which was the dying wish of his Cooking Attendant lord.

His great master had struggled his whole life to bring coffee to the world, and he had always fought against the extremists who defined coffee as a "beverage of the demons". He and I are the same, you know; both of us were summoned to our lord's side to accompany him to traverse the human world throughout his short existence.

Yet, in the wake of his cooking attendant lady's passing, coffee had been accepted by the masses and spread around the world like wildfire. I am keenly aware that nothing could have gone so well had it not been his great efforts.

He is the Food Soul born of coffee; he is known to the world as - Coffee.

Other than the everyday business affairs, the 'Satan Coffee House' has a secret business that is only available to human beings: Missions.

There is no doubt that there are those in the human world who take issue with the way we Food Souls do things. So to avoid detection, Coffee chose a location in the middle of a dense forest; completely disconnected from the human world. Meanwhile, he set up black boxes around Gloriville where we could receive our assignments.

"As long as you write down your wish and put it into the black box along with enough money, all your wishes will come true." This is a myth that has suddenly spread throughout the human realm at an unimaginable speed.

The missions just keep coming and the coffee business is booming. Though the myth says "All your wishes will come true", we can't actually accept every mission that comes our way."

We often receive missions like "Make me the richest person in the world" or "I wish to fly in the sky like a bird". These are the ones that we find both funny and ludicrous, so we just return the money along with the letter back to the sender.

Of course, we also get our share of assignments with malicious intent, but Coffee has never shown them to us.

I once saw a letter when I was cleaning the house. I know that Coffee tried to maintain peace with the humans in his own way. So to uphold the positive image of the humans in our hearts, he took the dark assignments himself.

Actually, he is a pretty smart guy, but when he is around friends, he's not exactly the sharpest tool in the shed.

Unlike Coffee and Tiramisu, I don't have any particular aspirations. There is nothing I've been through that is worth mentioning. I'm not the complicated, emotional creature that the human being is.

So, I take everything as it comes; nothing is important to me except spending time with my friends at 'Satan Coffee' House.

Today's 'Satan Coffee' is radically different from when it was first established. We are now getting dragged into dealings with an increasing number of food souls. When I was passing through Light Kingdom with Coffee and Tiramisu, I even picked up a Food Soul that could almost be called a "Fallen Angel".

With great effort we finally got the Food Soul to spill her guts.

She is different from Coffee. I thought that the Food Soul could be like us and shrug off the death of the Cooking Attendants like we do. But she is living in the past and was not willing to let it go. She is clinging onto the memories of a time gone by for dear life. We advised her that we could use an outside force to help block out the memories if she wanted to forget.

But she never gave us a straight answer.

"I don't want to forget her, so that she can live on in my memory."

What a weird Food Soul she is. Is the morose feeling we all had as we watched our lord die?

Probably not. What she experienced should be stronger emotions. I have never met such a Food Soul like her, so I have been paying more attention to her. She and I have gradually become friends.

Seeing her let go of the past like this makes me happy for her. What is this feeling? I don't know, but I don't hate it.

I was a little hesitant when Coffee wanted me to work at Satan Coffee.

After all, I didn't like having to do the same thing over and over again. I also hate repeating myself. With a personality like mine, I wouldn't make much of a barista.

But he has seemingly never taken this to heart. He told me that I could have it my way.

And so the customers who patronize "Satan Coffee" all know not to put in the same order twice in the same day, nor repeat the same question.

I feel very good working in this kind of atmosphere.

We take commissions out of the black mailboxes in rotation. To avoid being discovered by the humans, we usually do this in the middle of the night. But on occasion there are some mishaps.

For instance, I noticed a little gaunt figure next to the mailbox while I was collecting letters today.

Although I don't have a problem with being seen by humans, Coffee always reminds us that we need to avoid it, so I have to hide out next to the mailbox and scope out the situation first.

I hid there watching the little figure for a long time, but it didn't move. It seemed like it was asleep. When I came out and got close to it, I realized that it was not a human being but a food soul.

It appeared that there were minor injuries on its tiny little body, and it was lying against the mailbox sleeping quietly.

"Should I bring her back to Satan Coffee?"

After much consideration I decided to bring her back with me. It wouldn't be good to leave the injured friend sleep here overnight. So, I headed to Satan Coffee with the tiny figure in my arms along with all the mail.

Had I known what would happen, I would have never brought her into the house.

Looking at that little food soul I'd brought back jumping and hopping madly around everywhere right on the exact spot I'd just broken my back cleaning, I was one step away from throwing her out of the window.

And she was so full of herself; she was just a little kid but she talked with such a snippy tone.

"Who do you think you are kidnapping, Little Missy?"

Coffee stared at me with an expression that spoke volumes. "That food soul you brought back is your responsibility." Black Tea and Tiramisu didn't pay me any mind at all. They were too busy enjoying their afternoon tea.

"Now, you just calm yourself down." I suppressed the impulse to solve the situation with violence. Then she opened her filthy mouth again.

"How is it a little maidservant like you thinks she can order Little Missy around?!"

I just couldn't take it anymore.

If she wasn't willing to talk things over nicely, I figured I'd let her sleep for a few more days.

"She's still hurt, be gentle with her next time." I detected just the tiniest hint of glee in Coffee's voice. He seemed pretty ticked.

"It might be better to help me put her in the room instead of making fun of me," I replied in a curt tone.

"Okay, okay." Coffee answered, and we carried the little thing to the room.

"It looks like I'd better not bring any crazy food souls back here again."

Black Tea was smirking a bit when she saw me there strewing in my own juices like that. In Satan Coffee, I didn't know what to do with her. At the end of the day her emotions would just oscillate wildly no matter what I said. She'd either be raging or melancholic. To some effect, hers was a terrible existence.

"She just feels uneasy, she'll be fine in a few days."

Tiramisu was chuckling when she saw the awkward situation I was in.

I sighed, then, went back to the kitchen. Although I had knocked her silly, I was still going to prepare some food to help her warm up. After all, I was the one who brought her here.

The pot on the stove was boiling in the kitchen, and letting off steam with a "whistle," while the sound of Black Tea and Tiramisu's cheerful laughter came echoing in from the outside sporadically, as well as the sound of the baristas brewing coffee.

It was just another day.

Milk, which had been discovered since the early-mid of Tierra and was popular all over the world, was summoned in the 265th year of the calendar by a Master Attendant who devoted himself to the study of drinks.

In the same year, the new beverage "coffee" was discovered and its Food Soul was summoned to the Master Attendant's side. Unlike milk, coffee was not immediately widely available after it was discovered. People feared the unknown and did not dare to try it.

So Milk and Coffee helped the Master Attendant of the restaurant, aiming to transform "coffee" into a drink that is popular in the world like "milk."

In the 300th year of the calendar, the Master Attendant was already 70 years old and left the world under the watchful eyes of the two Food Souls.

In the same year, the Satan Coffee House officially opened in a dense forest in Gloriville.

In the same year, the world began to accept coffee and love coffee as the deceased Master Attendant had wished. The term "devil's drink" had changed from a derogatory term to a popular term for it.

Milk, as a witness to the whole process, is determined to accompany her friend and run the "Satan Coffee House" with him every day.

In the 310th year of the calendar, Tiramisu and Chocolate joined the Satan Coffee House.

In the 320th year of the calendar, after the accidental rescue of the Black Tea, Black Tea had joined the "Satan Coffee House."

In the same year, when the injured Crepe was picked up, Crepe was added to the Satan Coffee House.

In 340th year of the calendar, Escargot, who was treated with narcolepsy, joined the Satan Coffee House.

In the same year, Pastel de Nata, who wanted to concentrate on cooking, joined the Satan Coffee House.

In the 400th year of the king's calendar, Macaron, who was looking for Crepe, joined the "Satan Coffee House."

"The days ahead are going to be with these friends. "

This is the Milk that hasn't lived for a long time yet but had found the ideal in the "Satan Coffee House".