Nevras is the third region available in the game. It is unlocked at level 30, once you have completed the normal stages of Gloriville and Light Kingdom.

The Academy was established early in the Age of Spirits, its main purpose being to instruct mankind in the use magic. After the beginning of the Age of Man, it was taken over by soldiers dispatched by Karl, who later sent talented people to the Academy to continue their magical research. Nominally the Academy is an autonomous neutral territory, but in practice it is still controlled by Gloriville and Gloriville maintains the right to prioritize and monopolize newly developed magic and the subsequent Magic Crystal technology.

Nevras is located on a peninsula at the extremity of the Eight Godpeaks Mountains. With the highest mountain lakes in the world, it is located at the northernmost tip of the world, so the temperature is lower than in other regions. The extreme north is basically a permanently snow-covered environment, while the area around the southern coast is relatively suitable for habitation. The area is also known for its outdoor hot springs, but due to the strong corrosiveness they are only used by local people as a heat source. 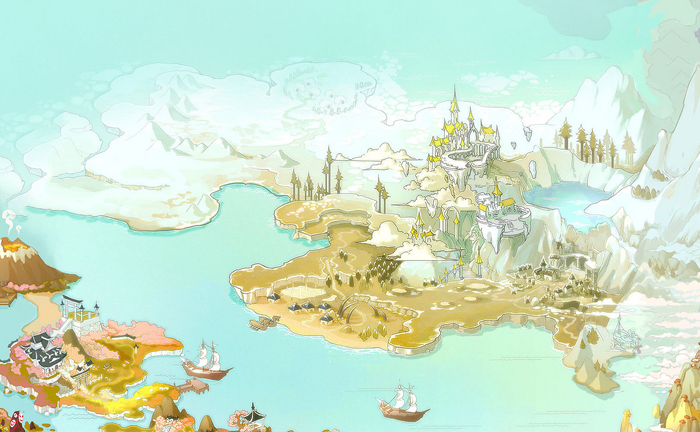 Although politically the Academy is controlled by Gloriville, it can also receive financial support from Palata because of its regional neutrality. Despite voices of dissent from Gloriville, the royal family has not expressed an opinion on the matter

The polar snowfield is part of the peninsula and is the coldest place on Tierra. In the Elves era, prior to the formation of the polar snowfield, there were many elves living here. Many ancient buildings remain intact. The Academy actively recruits adventurers to explore the area, but it seems that the hidden dangers within the polar snowfields are more than just the cold.

The Academy was established as early as the Elves era. Its main purpose is to teach humans how to use magic. In the human era, the school was taken over by Carl. He selected talents to continue working on magic. Nominally the Academy is in the anarchy-neutral area, but it is still subordinated to Gloriville. Whether it is the development of new magic or the subsequent technology of Magic Crystals, Gloriville has the power to prioritize and monopolize.

The history of the Lake of Ice Tears can be traced down to the Elves era. Based on literature, when the evil spirit, Ottovia was sealed in the Eight Peaks, the saints saw the tears of sorrow and unwillingness shed. Over time it gradually converged into a lake at the end of the eight peaks. Lake of Ice Tears is cold and biting. No living creature seems to able to survive in it.

Due to the influence of extreme temperatures, there was a gradual forming of Magic Crystals around the eight peaks. It was originally mined for use as a source of energy for living. Eventually Magic Crystals became the bases to awakening Food Souls.

Its location at the southern tip of Nevras gives this place the highest temperatures in the entire region. The hot springs of Blue Stone Town are beautiful. These hot springs provide a lot of heat for the town. The drawback though is that these hot springs are corrosive and cannot be used for bathing.