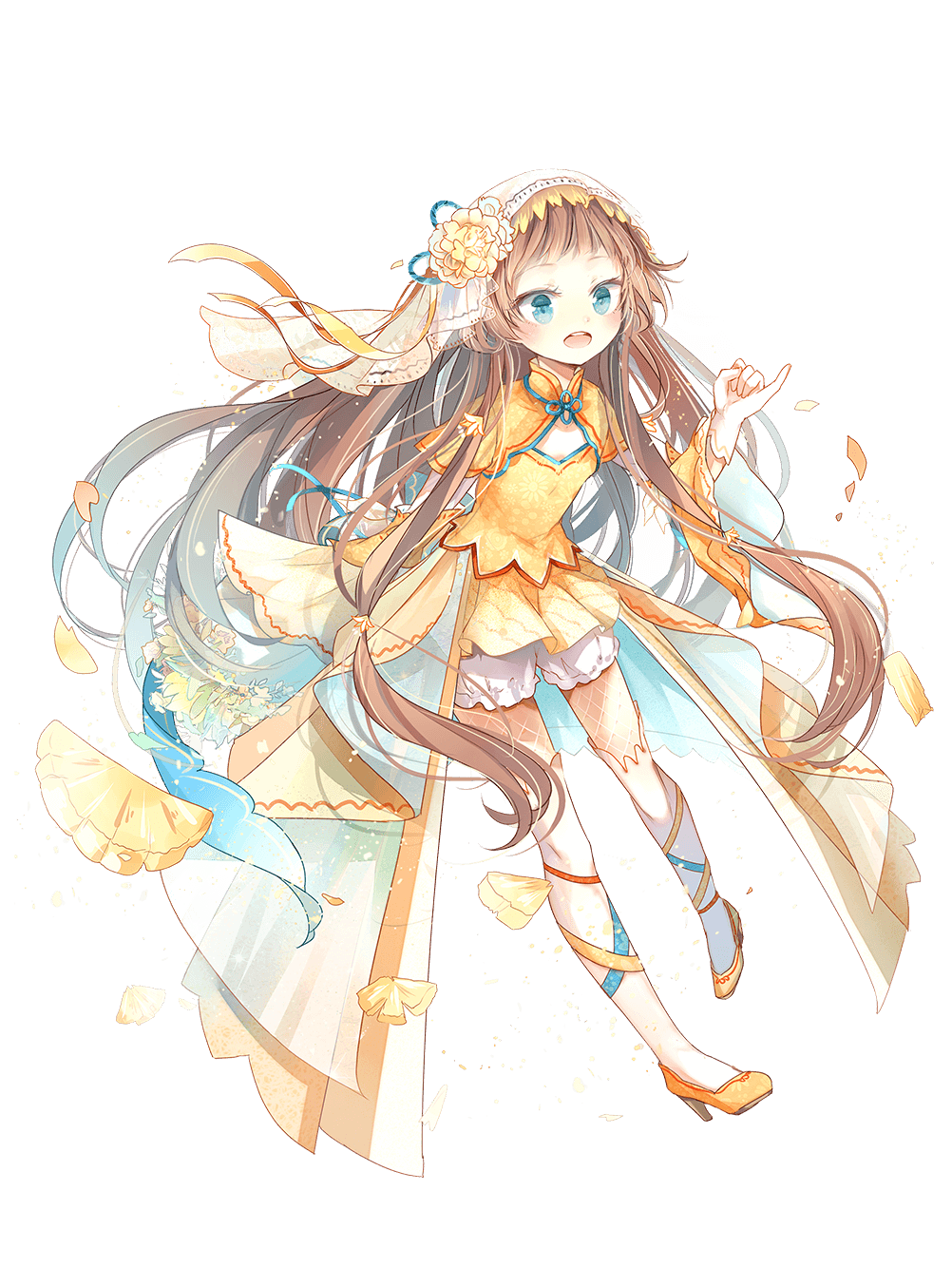 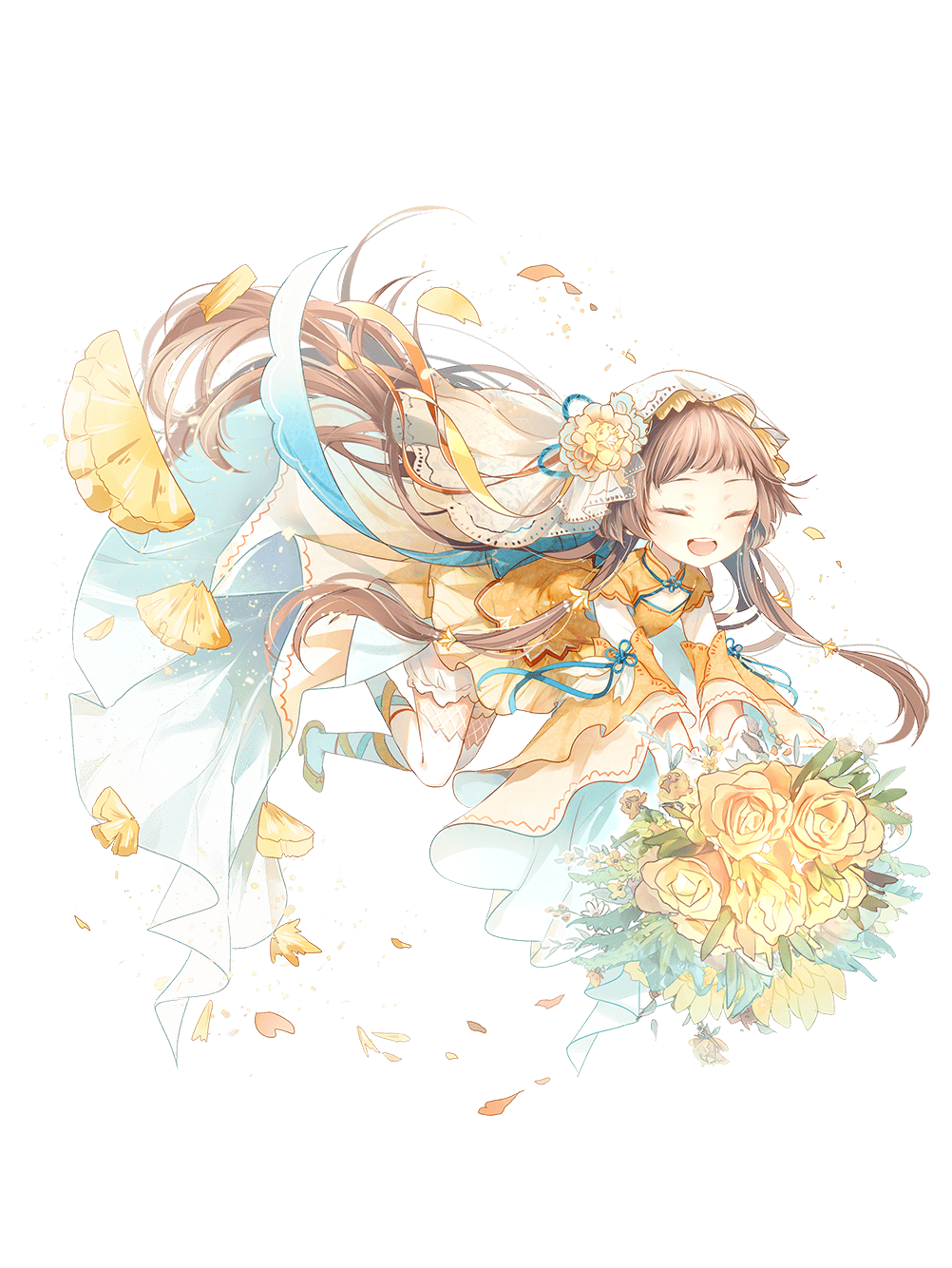 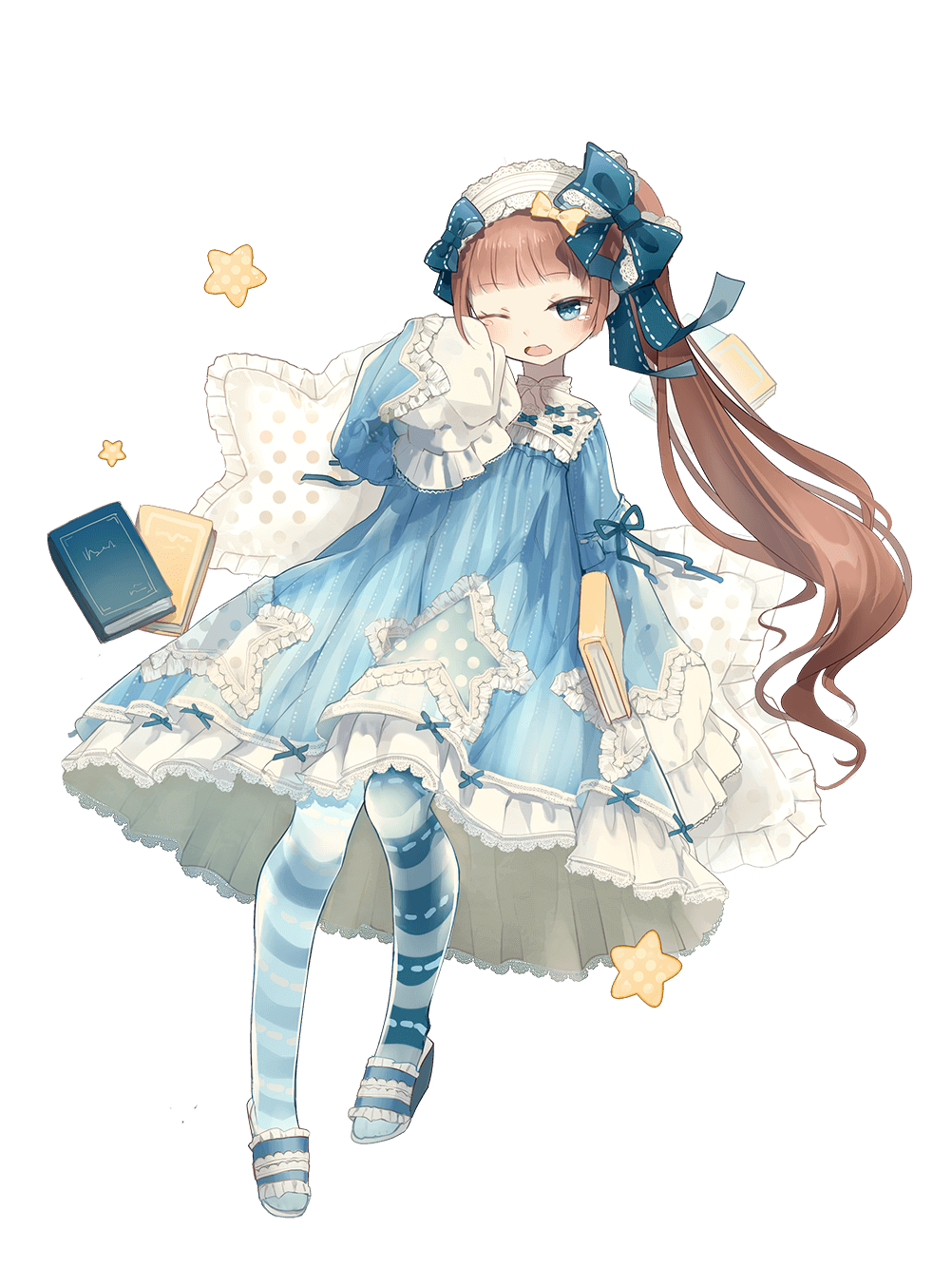 A motivated young girl who is generally very respectful although sometimes she does like to joke around.

Pineapple Cakes are a snack that is often enjoyed during ceremonies or given as gifts. They are flaky and sweet, but very tasty. 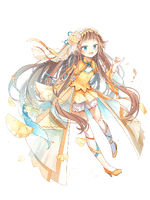 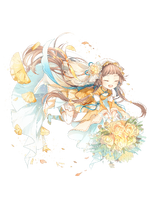 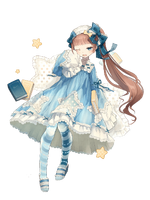 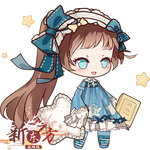 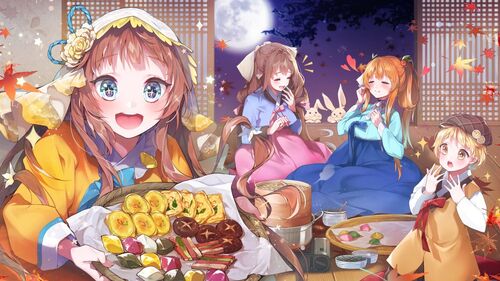 As flower petals fluttered down, ribbons of flame held the fallen angel firmly in place. A gentle flourish of the bouquet in my hand - and it collapsed in front of me with a shrill shriek.

“And so, it’s done.” Watching the fallen angel peacefully dissipate, I exhaled deeply. Fatigue suddenly welled up inside me and I staggered.

Even for a food soul, three days of non-stop combat was too much.

“But...” From my bosom, I took out a piece of parchment. On it was a commission marked by red check after red check.

Uncapping the red pen, I put the final check on that parchment.

Dragging my tired body behind me, I returned to the village that had tasked me with this commission. There, the villagers greeted me with enthusiasm.

“You’ve really helped us a lot.”

“Do you want to come rest at my house?”

After responding to the villagers’ thanks, I was just about to leave when a fresh bouquet was thrust in front of my face. It was nothing particularly beautiful or rare; it was just some wild flowers that had been crudely assembled together.

Compared with the set in my own hands - there was no possible comparison.

Yet even so, I still took them happily, looking at the girl - even smaller than me - with a gentle smile. “Thank you.”

“As long as big sister likes it,” the little girl said, staring at me with a strange light in her eyes. Then, in a loud voice, she announced, “Big sister, you’re so pretty. Will you marry me?”

Those familiar words sent me into a brief reverie. Fragments of a long-forgotten past appeared before my eyes.

I reached out and gently patted the little girl on the head. Quietly, I responded, “Maybe when you’re a little older, okay?”

“Master Attendant, you’re so pretty. Will you marry me?”

Seeing how close and intimate they looked, I could only shrink further into the corner.

Not only was she kind and beautiful, but when she picked up a sword, she was also dashing and dependable.

“Master Attendant, me too!”

Too many. There were just too many food souls who liked Master Attendant.

And they were all so eye-catching and impressive. Compared to someone like me, who dressed plainly and looked homely - they were simply in another world.

Master Attendant was a renowned female cooking attendant. She commanded numerous food souls, and many of those who were afflicted by fallen angel attacks would commission her to solve their problems.

Today, Master Attendant had assembled everyone to discuss who would work on the next commission. Even as the gathering wrapped up, my name still hadn’t been called.

This wasn’t strange; I understood that.

Compared to everyone else, I was too weak, too unassuming. I even wondered, half-mocking myself for it, if Master Attendant had perhaps forgotten I existed.

And in that moment, I heard Master Attendant’s summons. “...is Pineapple Cake here?”

At a loss, I looked up only to see Master Attendant standing on that stage, looking at me with a warm and welcoming expression. “I have to go on a long journey and will need a companion. Will you accompany me?“

On the bumpy carriage ride, I timidly shrank into a corner. From time to time, I’d lift my head to sneak a glance at Master Attendant besides me, but I didn’t dare to speak.

A heavy silence lay upon the entire carriage.

Until she suddenly broke it. “Pineapple Cake, do you dislike me?”

“I... I don’t dislike you,” I stumbled over my words a bit, then the rest tumbled out in a flustered mumble. “I... I like Master Attendant.”

Those last few words came out as quiet as a mosquito’s whine.

“Then why...” As Master Attendant said these words, she inched closer to me. Her warm breath gently stroked my cheek, and I heard her quiet words in my ear. “...why do you stay so far from me?”

My heart rate suddenly accelerated. I felt so uneasy - and yet, why did this make me happy?

Even without touching it, I knew my face was on fire right now; my mouth was dry as I took a few deep breaths. I had to recover my mental composure before I could continue weakly, “I’m just...”

Master Attendant took my face into her hands, turning me around to look her in the eyes. “What are you afraid of?”

“I... I’m... I’m afraid I’m not good enough and I don’t deserve to be by your side.” Transfixed by her pure and beautiful gaze, I unwittingly said what was in my heart. “Compared to everyone else, I’m neither pretty nor strong. I’m afraid you will abandon me...”

I still had more to say, but a sound from outside interrupted me.

When the carriage stopped, there was a lush and dense forest in front of us.

After thanking the driver, I walked beside Master Attendant on the forest path. She did not mention what had happened on the carriage again; instead, we walked in silence for a long time.

At first, I wanted to struggle, but Master Attendant started talking. “Do you know why I came out here?”

“It’s to help you get rid of your sickness.”

Right then, Master Attendant stopped walking. What appeared in front of us was a small hollow in the heart of the forest where the vegetation thinned out, exposing bare stone. But the important part was…

“Fallen angel!” Looking at the massive form in the middle of the basin, I covered my mouth and exclaimed in surprise.

Master Attendant held my hand a little more tightly and continued, “A few days ago, the Chef’s Guild received a report. It said that in this forest, someone had found a fallen angel that only slept and never woke. This seemed so ridiculous that the Chef’s Guild was unwilling to send people to verify the story, but just ignoring it seemed to be a bad idea.”

“Thus, they released this bounty. I thought it might be helpful to you, so I took it.”

“Now, we’ve verified there is indeed a fallen angel. So...” Master Attendant suddenly squatted down to look me directly in the eyes. “Are you willing to take care of it, Pineapple Cake?”

“Then what do you want to do?” Master Attendant’s warm voice suddenly took on an edge. “Do you want to run away, Pineapple Cake? You are a food soul; I am a master attendant. Are we planning to see a fallen angel and pretend it doesn’t exist?”

“I...” For a moment, I was at a loss for words, scared by Master Attendant’s sudden harsh tone.

“Of course I believe in Master Attendant, but...”

“You were summoned by me,” Master Attendant said, standing up straight and drawing the longsword at her waist. “I poured in my heart and soul, and I filled it with my emotions.”

Hefting the blade, she used it to draw a flourish in the air.

“Only after so, so much hard work did I summon you...”

Master Attendant slowly walked to the edge of the basin.

“You are second to no one.”

As she flung it, the longsword seemed to transform into a ray of light before plunging deeply into the sleeping fallen angel.

Hurt, the fallen angel came alive with a roar that made the entire sky shudder. The surrounding branches and leaves all swayed violently.

“If you don’t fight, then we’re all screwed.”

Panting heavily, I collapsed limp into the basin, surveying my surroundings in near-disbelief.

Master Attendant sat down behind me, exhausted but coughing and chuckling. Her soft armor was stained with tracks of mud.

An entire sky of flower petals slowly drifted downwards, the light catching them and making them sparkle mid-air.

Before my eyes was the dissipating fallen angel.

“See, isn’t it done now?” With great difficulty, Master Attendant crawled back up and walked to my side, gently embracing me. “Pineapple Cake, you were never worse than anyone else.”

As she said this, she lifted her hand to pat my head. “So, please don’t shrink into a corner by yourself ever again. If I see it, I will be very sad. Okay?”

Master Attendant had always watched me, had always cared about me, had never forgotten me. That gave me encouragement and warmth.

Like she had said, like she had worked so hard to tell me - I was second to no one.

Wiping the dampness out of my eyes, I turned and buried my head in her embrace and said earnestly, “Okay!”

In Light Kingdom, there once was a famous female cooking attendant.

Because she was so reliable, she commanded many food souls; she resolved many emergency situations that had left the Chef’s Guild with a headache. As a powerhouse veteran, she also mentored many cooking attendants and their food souls. The number of those she had encouraged and helped was so great as to be uncountable.

Pineapple Cake was one of them.

Her transformation would startle anyone who saw it - from an inconspicuous wallflower to a glorious existence who stood out from the crowd.

Master Attendant led her to experience the tempering of battle, building her confidence. She also helped her change her image, turning her from a rustic bumpkin of a girl to a beautiful and cute little princess.

Pineapple Cake was deeply grateful for this.

But of course, all good things must come to an end.

After all, there “once” was a famous cooking attendant.

Along the way, other food souls would occasionally greet her. But on each of their faces was only muted despair - completely unlike the joy of someone welcoming a family member home. When she entered the inner courtyard, she encountered Eggette.

“Yep, I’ve completed all the commissions we were previously entrusted with.”

“After all, we can’t let Master Attendant’s reputation get damaged,” Pineapple Cake said, suddenly lifting her hand to hide a slight smile. “When Master Attendant wakes up, she’ll be happy to find all the jobs have been completed, right?”

After saying goodbye to Eggette, Pineapple Cake pushed open the door to the building.

In the middle of the room, a beautiful woman lay on the bed, a pained expression on her face. Pineapple Cake quickly walked beside the bed to hold her hand.

As if she had felt Pineapple Cake’s presence, the furrows on the woman’s brow eased a little.

“I will find out who those people were.”

“I’ve already grown up; when will you wake up?”

Pineapple Cake leaned against the woman and quietly sank into sleep.