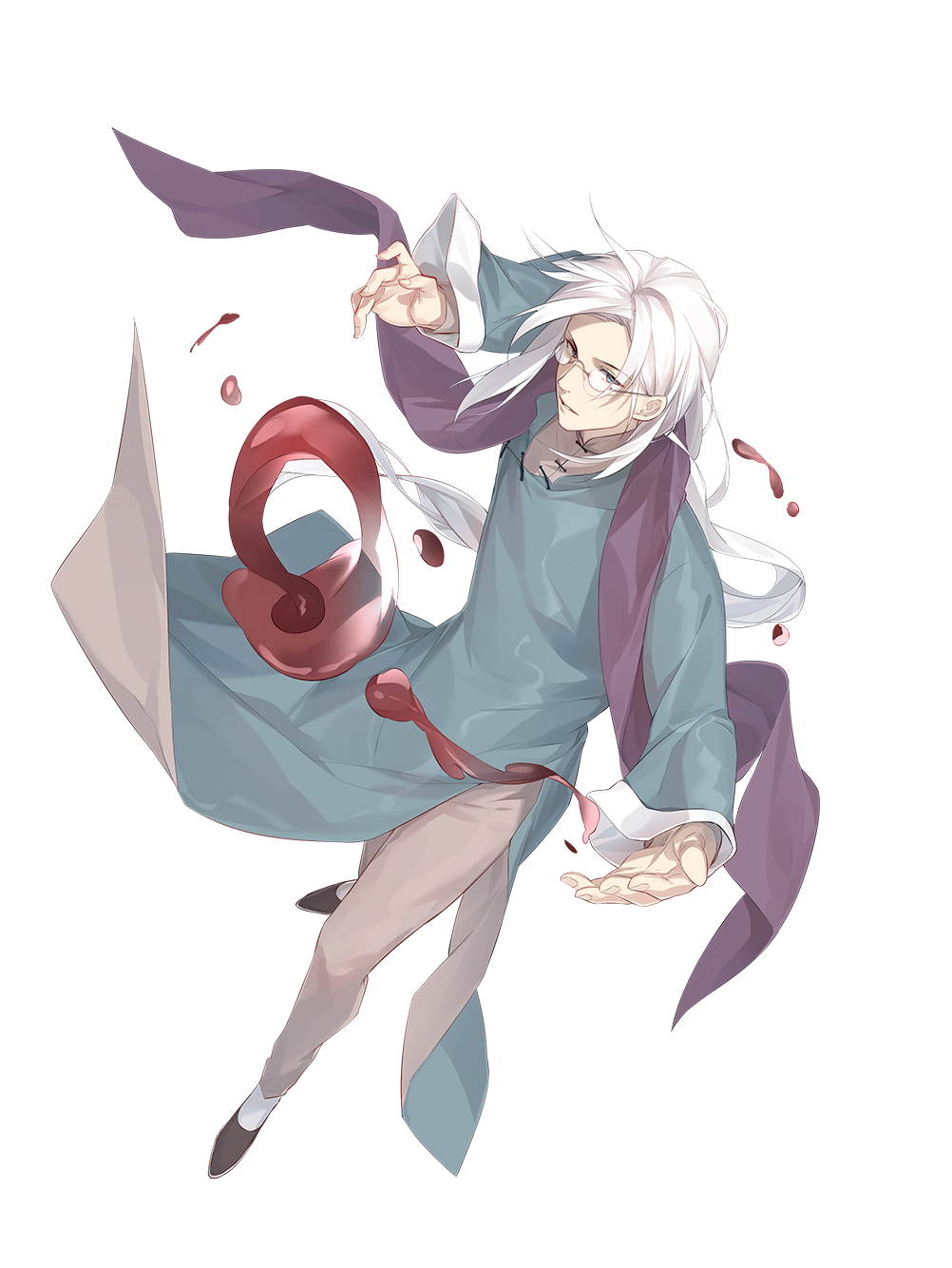 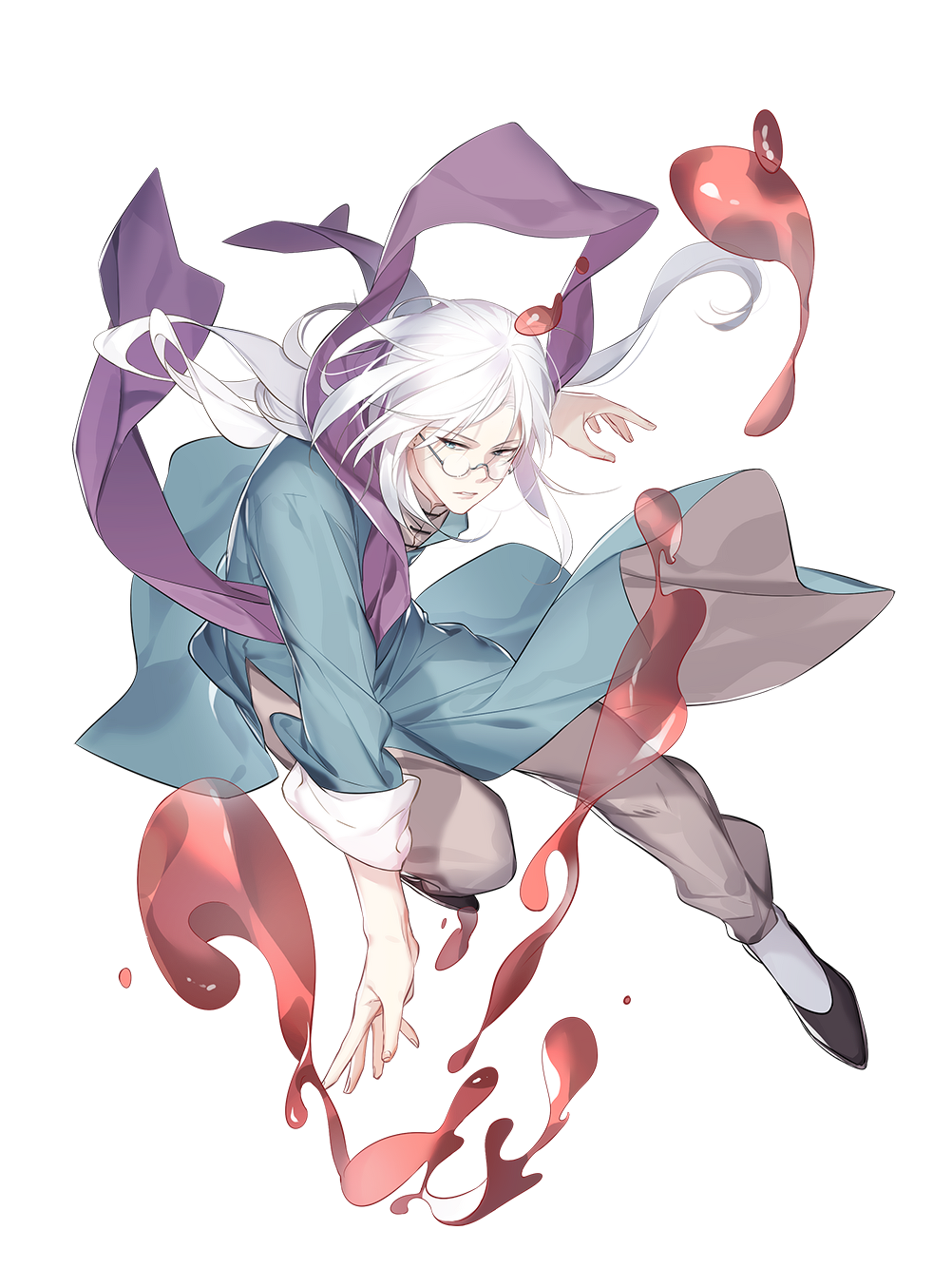 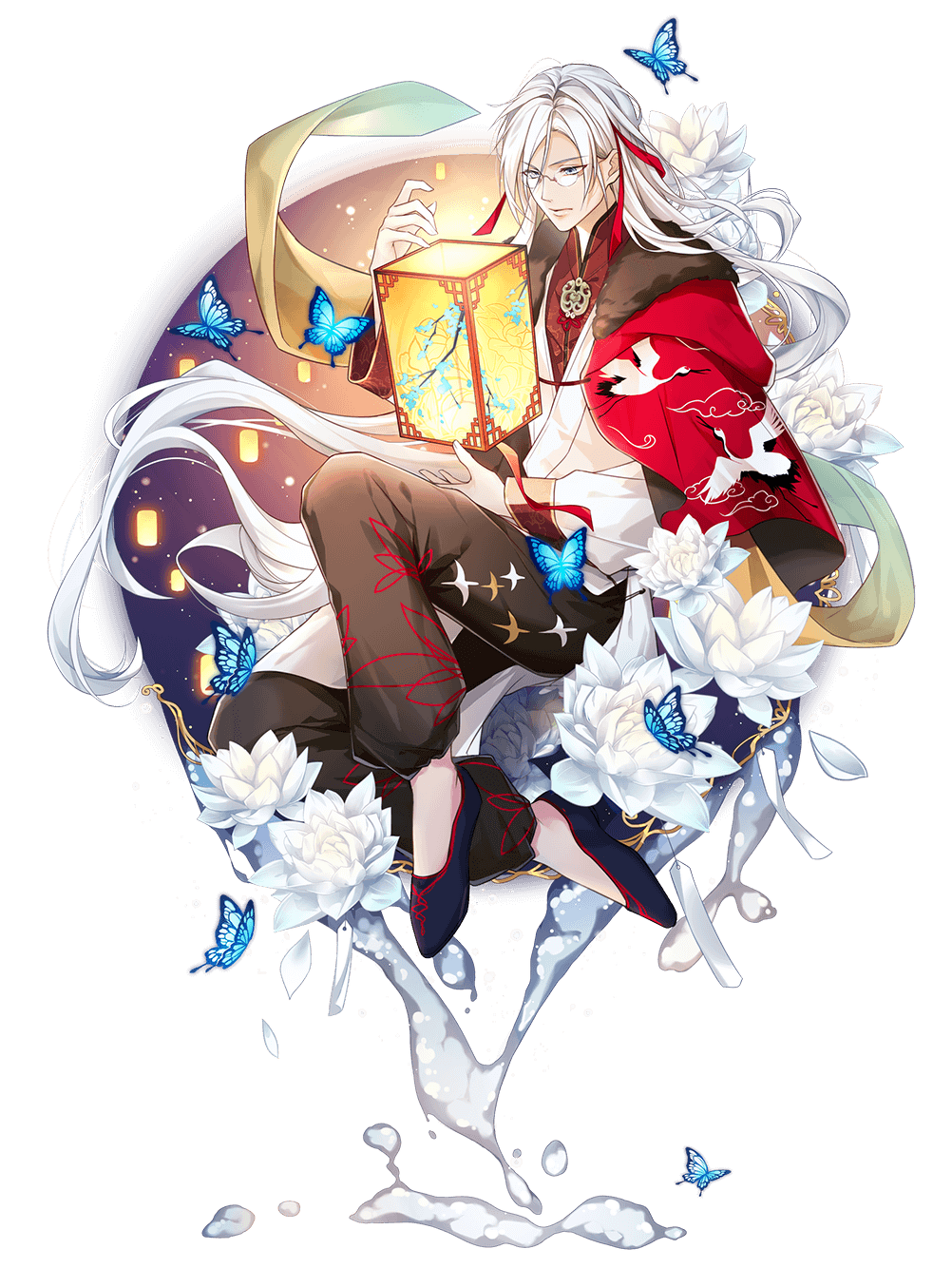 A gentle and well-mannered scholar. He adores listening to the opera and singing classic tunes. His voice can often be heard echoing in the streets.

Plum Juice was a royal soup enjoyed by emperors & later being to the public. The sweet and sour flavor of Plum Juice is refreshing and thirst-quenching.

Plum Juice is unable to resurrect a dead teammate. In the description of his energy skill, the word 'reviving' only means 'healing'. 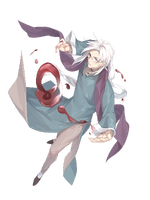 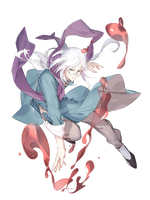 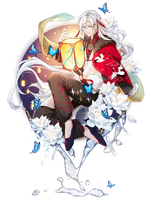 I sat quietly on a small folding stool in the alley, watching passerbys hurry along on their way. They looked fearful, and so few even noticed my unassuming little stall. I would say they were very preoccupied with something.

The only person who stopped was a rebel soldier patrolling the city. Ever since Jade City had been captured by the rebels, they've been relentlessly seeking the Divine Lord's successor. The only way the common folk would ever obey them was when they finally wiped out every trace of the Divine Lords, once and for all.

"I just give people a place to have a chat and a bit of rest. I have complimentary tea here as well, if you'd like a cup?"

"You're a Food Soul?" He sat down in a brusque manner and began to massage his legs. He tossed back the large cup of tea I offered to him in a single gulp.

The soldier let out a relaxed, "Ahhh, perfect."

"I'm a local. I got tired of reading all the time so I came here to set up a stall and enjoy the crowds. I come here to sit, that is all. So there's no business to speak of."

"Mmhm... well, here's some news for you. There's an escaped criminal. A divine clerk who committed regicide. If you see him, let me know. There'll be a reward in it for you."

The soldier left, satisfied. I glanced around to make sure no one was watching, then returned to the alley with my folding stool and knocked gently on the wooden door.

Jade City. The ancient royal city that had stood for a thousand centuries had been embroiled in war for more than a decade.

When White Tiger, the Divine Lord of the Light Kingdom, had reached the end of his life, rebels had seized the opportunity to attack before his successor could come forward. They attacked from the west and quickly occupied the city.

This young divine clerk had planned to escape the city through the sewers, but had been besieged by Fallen Angels. Luckily, I heard the commotion and rescued him. I may have rescued his life, but staying any longer in this city was still dangerous.

"You still intend to go?"

"The rebels have prevented news of Jade City's fall from spreading. So if someone doesn't inform Lord Southplume before he arrives to take the throne, then he'll be walking right into their trap. He'll surely die."

"If things have already reached this point, why don't you just give up?"

"How could a Food Soul like you understand?!" He bellowed, becoming angry at my question.

"I'm sorry, but I know that if you need to force something, it won't end well; Things must follow their nature." I've spent years reading a great number of human-authored books; This kind of argument is calling "reasoning" and it can sway many humans greatly, but this divine clerk wasn't convince. "The peace and security of the Light Kingdom can't be maintained by just anyone."

"The Light Kingdom can only be safe if Lord Southplume takes his place as the Divine Lord." He gazed in the direction of Outlook Fortress, his eyes full of determination.

"You're not afraid of dying for this?"

"This is the fulfillment of my faith!"

"Faith!" He looked at me with eyes ablaze, as though saying this word took all his strength. It seemed to represent everything he had.

However, to Food Souls such as I, there is nothing more important than our contract. Our duty lies within obeying our contract, protecting our Cooking Attendant and eradicating any and all Fallen Angels.

But that was the past. My own Master Attendant had died alone three years ago and left me this small house. Since then, all I've done were to read books and wander around the city. There had been nothing else for me to do, until I rescued this clerk.

"Time waits for no man. I have to go." He stood up and waved goodbye to me, then walked with a tremble to the door.

"Your foot might still be injured. There's nothing convenient about this trip, and if you run into any Fallen angel, it'll be your death sentence."

"If you help someone, then help them all the way."

Faith. Even though I didn't understand just what it was, if it could make this man willingly risk his life, then it must be incredibly important.

The Jade City gates were heavily guarded by rebel forces, so there was no way to get out through the main entrance. Because no one had taken the time to clean the sewers during the several weeks of intense fighting on the surface, they were now infested with Fallen Angels. Although it was dangerous, it was the only way out of the city without being noticed.

"Going through here is the only way, but with you here I don't think we'll run into any problems."

"Just don't let your guard down."

Maybe he listened to my warning, so for a while we didn't say a word to each other as we traversed the sewers. The only sound was that of the gurgle of the putried waste water flowing by.

"I want to ask you something." He suddenly stopped and turned towards me, though I could barely make out his silhouette in this darkness. "Even though I'm a divine clerk, I'm still an ordinary human being who can die, but you..."

"This isn't just about me, you have to understand. Lord Southplume must become the next Divine Lord. This is about the future of the Light Kingdom."

Humans really are strange. They always insist on thinking about the consequences on a larger scale, even when it's just a matter between two people. Still, isn't that a big part of the reason why they can dominate the world of Tierra?

We continued the rest of the way in silence, and even though we encountered several Fallen Angels, I took care of them easily. By and by, we finally saw the light at the end of the sewer tunnel.

However, this light was broken up by many, many shadows.

A large force assembled outside Outlook Fortress, at its head a lavish, oxen-pulled cart; sitting in it was a beautiful man dressed in finery and I thought, 'This must be Southplume, the man who is supposed to replace the Divine Lord.'

So I walked up to him.

"Who goes there?" A guard noticed my approach and stood in my way. "You are not permitted to block Lord Southplume's path!"

"I'm Plum Juice, a Food Soul, and I have an important matter to discuss with Lord Southplume."

"Wait here." The guard was very reasonable and reported the matter to the man in the cart. Soon it rumbled its way and stopped in front of me. Southplume stuck his head out and smiled.

"Plum Juice, is it? Wonderful to meet you! What's this about then?"

"... One of the divine clerks asked me to pass a message along to you. Rebels have occupied Jade City, and I'm afraid if you go there now, it will end badly. You should gather your forces at the fortress and then wipe the rebels out, then take back Jade City."

"I see, I thought as much." He responded, unperturbed, as though things just didn't seem so bad. On the other hand, his reaction lit an unexpected fire in my heart.

"Hmm? Oh, you misunderstand me. It's not that I'm unmoved by his sacrifice, but if you spent time with him then I'm sure you understand that my mission is more important to him than a few tears over his death. Isn't that right? The only way his soul will be able to rest is if I take over as Divine Lord."

Southplume's words were just like those of the clerk. It sounded as though they had rehearsed their words, but there was still something about their tacit understanding that I just couldn't wrap my head around.

"Lord Southplume, he often spoke of faith, but what is that?"

"You don't understand?" He thought for a moment, looked at me silently, then put away his smile. "This isn't something I or anyone else can teach you. Faith is a belief that belongs to you. You have to test it, understand it, and if you do that then you can change for it. You can even give everything for it."

"Maybe it's pointless in your eyes, but please believe me. You'll understand one day. If you can't explore, then start with the people around you."

Southplume finally became the next generation of Divine Lord, and the rebels returned to the garrison to protect the Light Kingdom's borders. A sense of vitality returned to this land and its people under his reign, but no one knew how he did it.

Plum Juice returned to Jade City and met many like-minded Food Souls; thanks to his intelligence, he prospered for a time in the city, but the idea of "faith" was never far from his mind.

Just what was faith?

Should Food Souls have faith?

For the time being he didn't have answers to these questions.

"Maybe someday I'll find a partner who will help me understand faith."

With this idea firmly in mind, Plum Juice stared at Jade City's Kunlun Palace for a while, then turned and disappeared into the crowd.