Sakurajima is the fourth region available in the game. It is unlocked at level 45, once you have completed the normal stages of Gloriville, Light Kingdom and Nevras.

During the era of the Elves, Ottova became a devil and killed lots of people. The high priest of the Elves asked for the power of the gods, and chanted the mantras to call for the Eight Peaks. This resulted in major continental shifts: the bottom of the northern sea began to erupt with magma, forming a few connecting volcanoes. Those volcanoes became the earliest form of Sakurajima. Before the War era, those who were sensitive enough to notice the turbulence to occur had moved to and settled on this island, becoming the first generation of Sakurajima Islanders. They have stayed and multiplied ever since.

Sakurajima was originally a one-piece volcanic island. Later, due to the rising sea levels, part of the low-lying ground was submerged. Eventually the North and South Islands were formed as a result. The southern islands are called by the locals "Shinohara " and the northern islands are called "Yellow Spring". At present, there is still a stable, but active volcano on Sakurajima. Over the years, it has become an indispensable source of energy for the islanders. 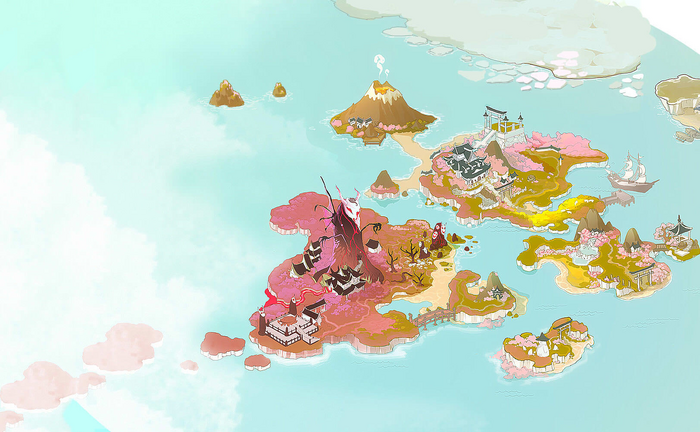 Originally, it functioned the same way as the Moonrise Terrace in Shinohara of the North Island: a place for the islanders to worship the Snake god. However, due to the influence of Roshomon, islanders no longer dare to come here to hold any ceremonies.

This is the main living area for Shinohara islanders. Residents highly respect the current island owner. They however dislike and reject outsiders. Rumors are often heard that sea explorers from Gloriville go missing in this area.

Roshomon was actually transformed over the years from a giant tree. The early legend had it that a young soul that had been sealed inside the giant tree almost escaped and caused a disaster. He was later re-sealed in the tree by a girl wearing exotic clothes. In the end, however, the soul was released with the help of external forces. It later merged with Fallen Angels and disappeared to nowhere. That giant tree has become Roshomon, taken by the islanders as a spot for washing away any evilness. After transforming from a giant tree to Roshomon, its inside is filled with blood-like fluid that continues to flow out, converging on the ground as springs, and eventually into the sea. All the living organisms in that sea area have gone extinct due to the influence of this liquid.

During the time when Sakurajima still had communications with the outside world, this was where the island owner lived. After Wangli year 513, the island was cut off from the rest of the world. People in other regions don’t know much about Sakurajima as it remains a mysterious place.

Moonrise Terrace is used for worshiping the moon god. Island owners over the generations would sing and dance with the islanders and offered tribute to the moon god for prosperity and peace.

Fuego Town is named so for its huge active volcano. The volcano has at least erupted a dozen times. In order to be able to observe and evacuate neighboring islanders in time, a group of scientists are permanently stationed here. The group has grown and the area eventually became a town.