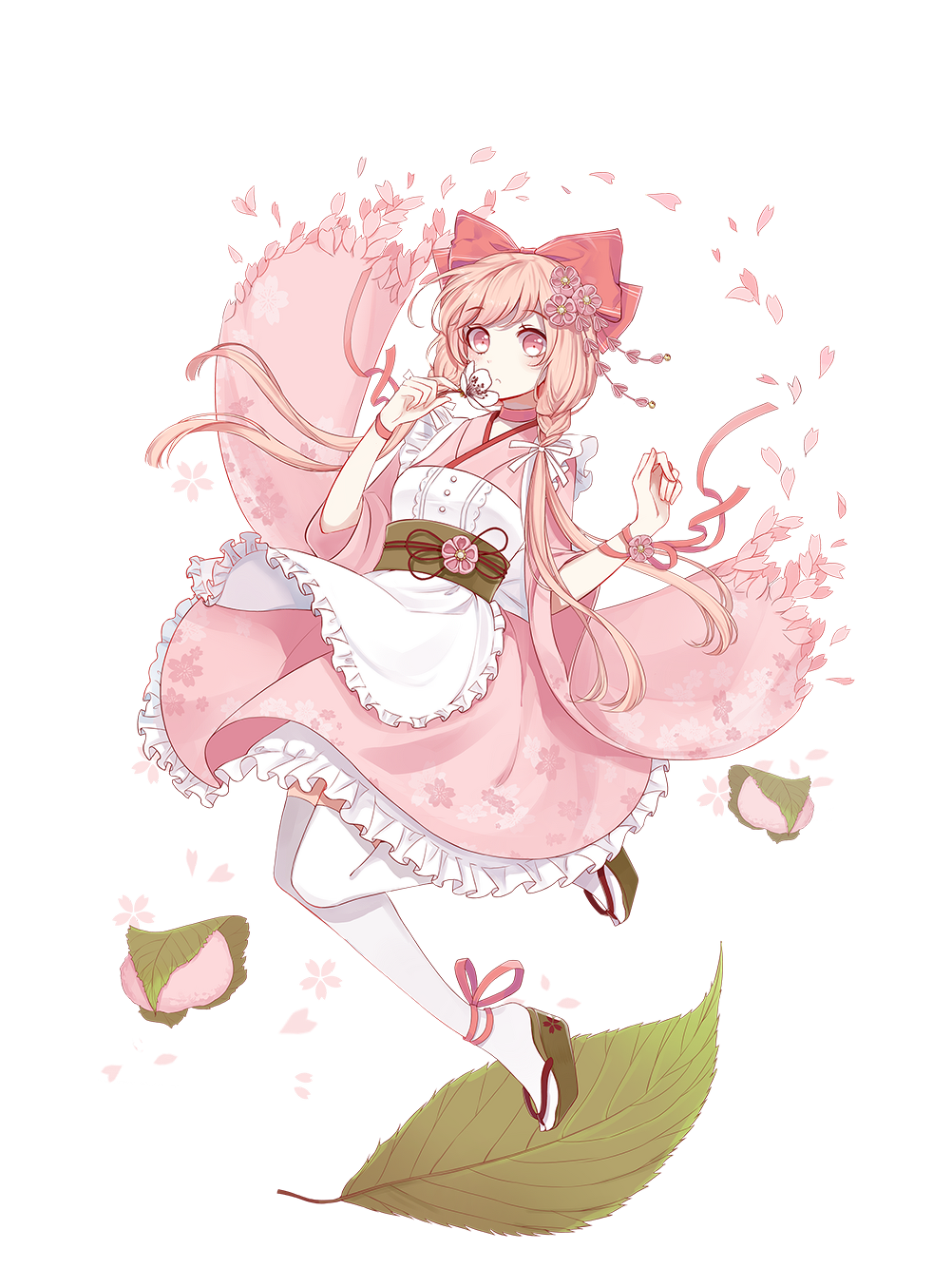 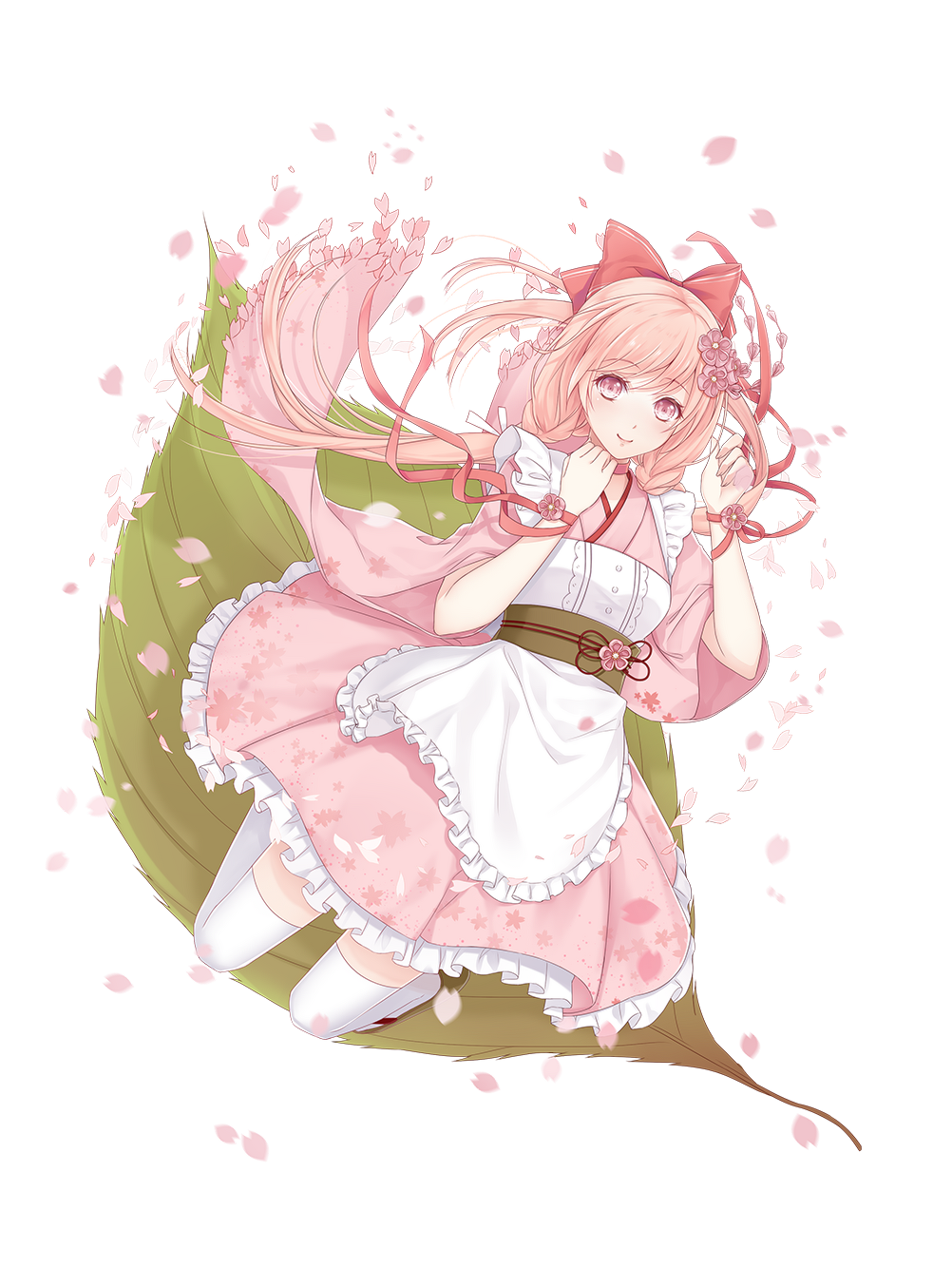 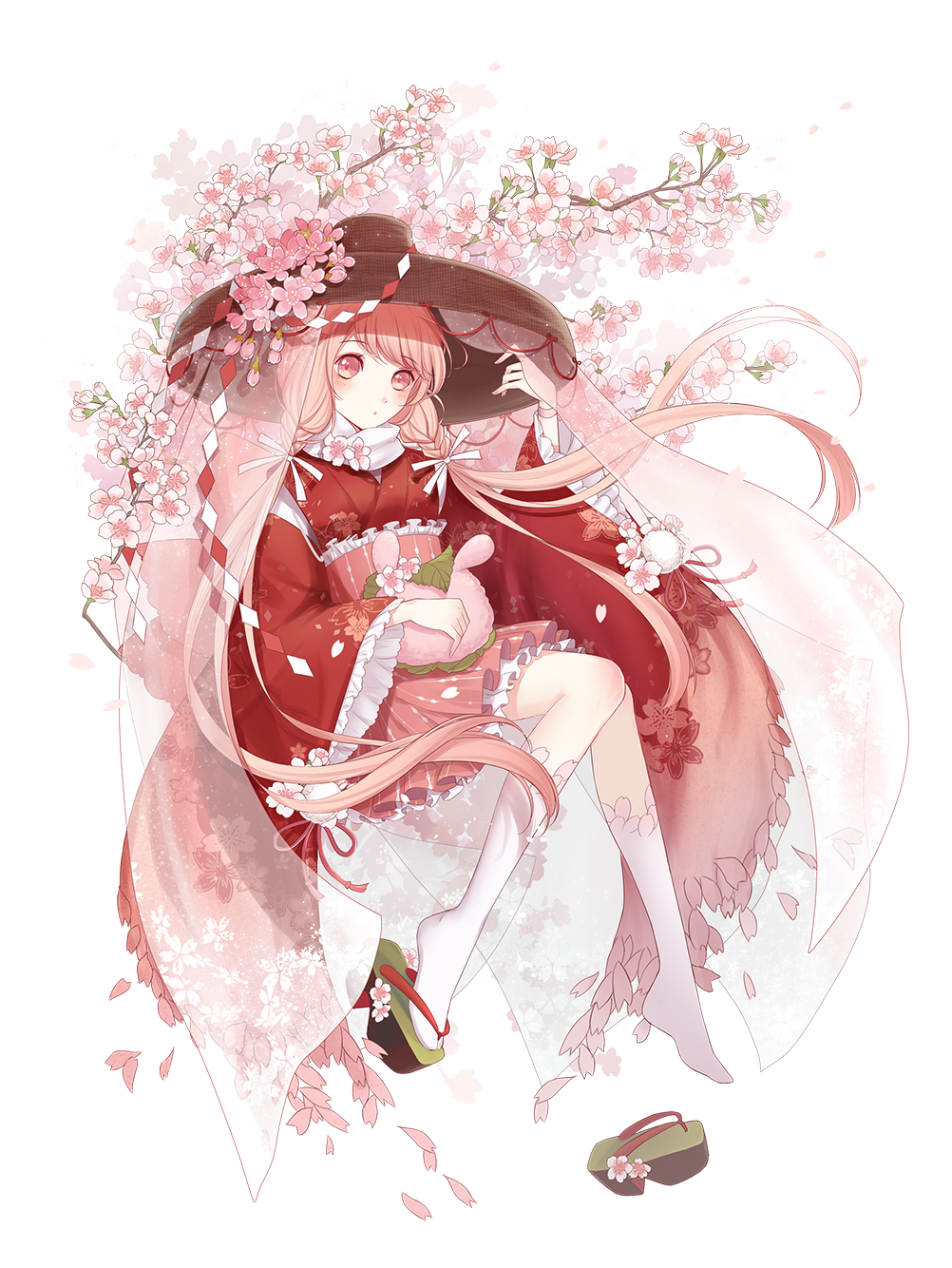 An optimistic young girl who hates seeing people sad. She enjoys making other people happy by summoning beautiful cherry blossoms to brighten up their day.

The soft texture combined with the sweetness of red beans nourishes the taste buds just like a warm spring breeze. 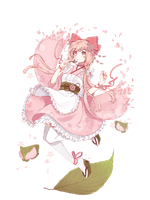 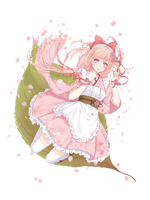 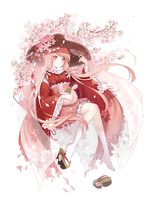 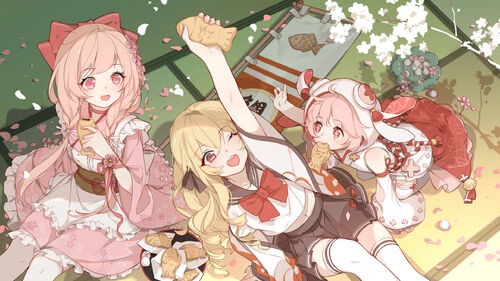 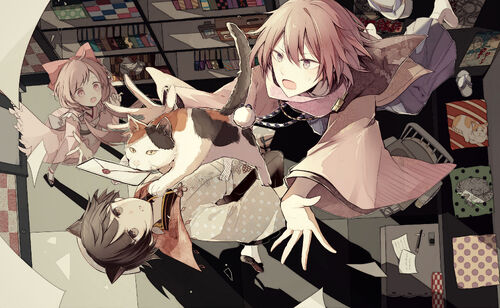 People always tell me their troubles to me, but as of late I've had troubles of my own.

I'm not sure why, but recently my cooking attendant has seemed dazed and confused. She mumbles when she talks and her eyes are shifty.

Even if I bring it up to her, My Lady will immediately change the subject.

"Is it that she cannot even confide her troubles in me?"

It just depresses me.

But I didn't want to put My Lady on the spot, so I can only just bury my feelings deep down inside.

I feel like My Lady the cooking attendant doesn't want to worry me, and that's why she's been holding back.

And even if she told me, there wouldn't be anything I could do about it anyway.

I thought I could calm myself down, but as it turned out I've just become even more anxious and pessimistic.

I do not want to see other people depressed, I like to see them relaxed and at ease. So, when I see the people around me in low spirits, I like to summon the petal rain to wash away their sorrows.

And it's precisely because of this power that I was so popular with the cooking attendants.

At the beginning, I was very grateful to the receive their love. I just had to do the smallest little thing and I was warmly welcomed by everyone. Yet the trepidation in my heart wouldn't go away.

If what came later hadn't happened, I bet I would be in that joyful butanxious state.

Even though it all happened so long ago, but it feels like it was just yesterday.

I got injured that day, but the cooking attendant who fell down right in front of me was hurt even worse than me. And not just physical pain, but mental, emotional and spiritual torture.

I didn't know how to comfort her, because words are useless to those who just have just lost their family in a fallen angel attack.

But I thought that I could at least do something to make her feel better.

I shut out all the pain and I reached out my hand, using all my remaining power within myself to call forth the cherry blossoms to ease her pain.

"Whap!" The clear and sharp sound of slap rang through the air.

I covered my swollen red face and stared at her in disbelief.

"What are you doing? Are you mocking me? Cough, cough!"

"Are you happy with yourself? Are you pleased? You food souls never die!"

Her eyes were burning red, and the hatred in her voice was palpable.

"Cough cough...you hypocrite! Shame on you for not letting yourself die instead of my family!"

I never thought after the matter after that day. I knew those were words that people only said in moments of extreme anger. I was just an easy target.

So I continued on as before, summoning a storm of flowers when people need a pick-me-up, and being a patient and considerate listener when they just need to talk.

Until I met my current Master Attendant, then it was like deja vu.

I was looking at him, lying in my arms, covered with blood, and I didn't know what to do.

They had just lost a lot of companions in a vicious battle with some Fallen Angel, including some very dear friends.

What could I do to ease my Master Attendant's suffering?

I don't have the ability to heal, I'm not a strong fighter, all I can do is summon flowers.

But what good could a storm of flowers do?

The sound of my new Master Attendant crying out interrupted my wretched thoughts.

"How can you look even worse than me?"

"Why don't you summon some flower petals? I really, *cough cough*, enjoy that..."

It was clear that he could barely open his eyes, why would he want to see a bunch of falling petals?

Even though my heart was full of misgivings, I carried out my Master Attendant's wish.

A cloud of cherry blossoms swirled in the air, landing on my hair, on my face, and on the bodies around us.

"On their way to the underworld, I'm sure they'd be glad to have cherry blossoms to brighten up the journey, don't you think?"

My Master Attendant whispered softly, picking up a cherry petal and holding it in the palm of his hand.

My eyes felt warm, as though after years of being held back my past had all started to come crashing, only to vanish like smoke in the face of his words.

My Lord has been purposely avoiding me, and the air of suspicion and secrecy made me very uneasy.

I didn't want to think negatively, but I couldn't help myself. I had acquired something so warm and beautiful that day, I was afraid of losing.

But really, I was sure I was being overly anxious.

Then, one clear and sunny morning I saw my Lord in front of me holding a cake and singing,

"I took the liberty of making the day I summoned you your birthday, is that okay?"

He scratched the back of his head sheepishly.

"Birthdays are a time of celebration for humans, so, uh, I wanted you to have the chance to experience that."

"The last few days I've spent a lot of time trying to settle on a cake and a present, so I'm sorry I haven't spoken to you much but I was afraid I would give away the surprise."

I felt like there were cherry blossoms dancing in my heart.

From the years 200-300 of the King’s Calendar, the battle between the cooking attendants and fallen angels reached a fever pitch.

Compared with their weakness at the outbreak of the war, the humans now had an effective means of resistance with which to mount an attack against the fallen angels.

One that worked extremely well.

The fallen angels were forced to leave the area where the humans lived, but countless cooking attendants’ lives were sacrificed.

Just when mankind is full of grief, a touch of cherry color is often seen floating among the crowds of the melancholy. With a wave t long sleeves, the blossom rain falls healing the people's broken hearts.

And from the cherry blossoms, the people’s spirits are at peace.

And warding off the sadness brought on by the fallen angels is a single small food soul.

In this protracted war, the hearts of all the cooking attendants who had lost their ancestors were given over to hatred and madness. They found a target for their rage, pointing out that the fallen angels and the food souls were just like each other.

But the understanding food soul Cherry Pie took all of this upon herself. Though she had become disheartened for human evil, she nevertheless insisted on dispelling their troubled beginner’s mind and ultimately moving mankind’s human heart.

Thus there was one person who said as she worked in silence,

“Thank you for being by my side and spending a whole life with me.”