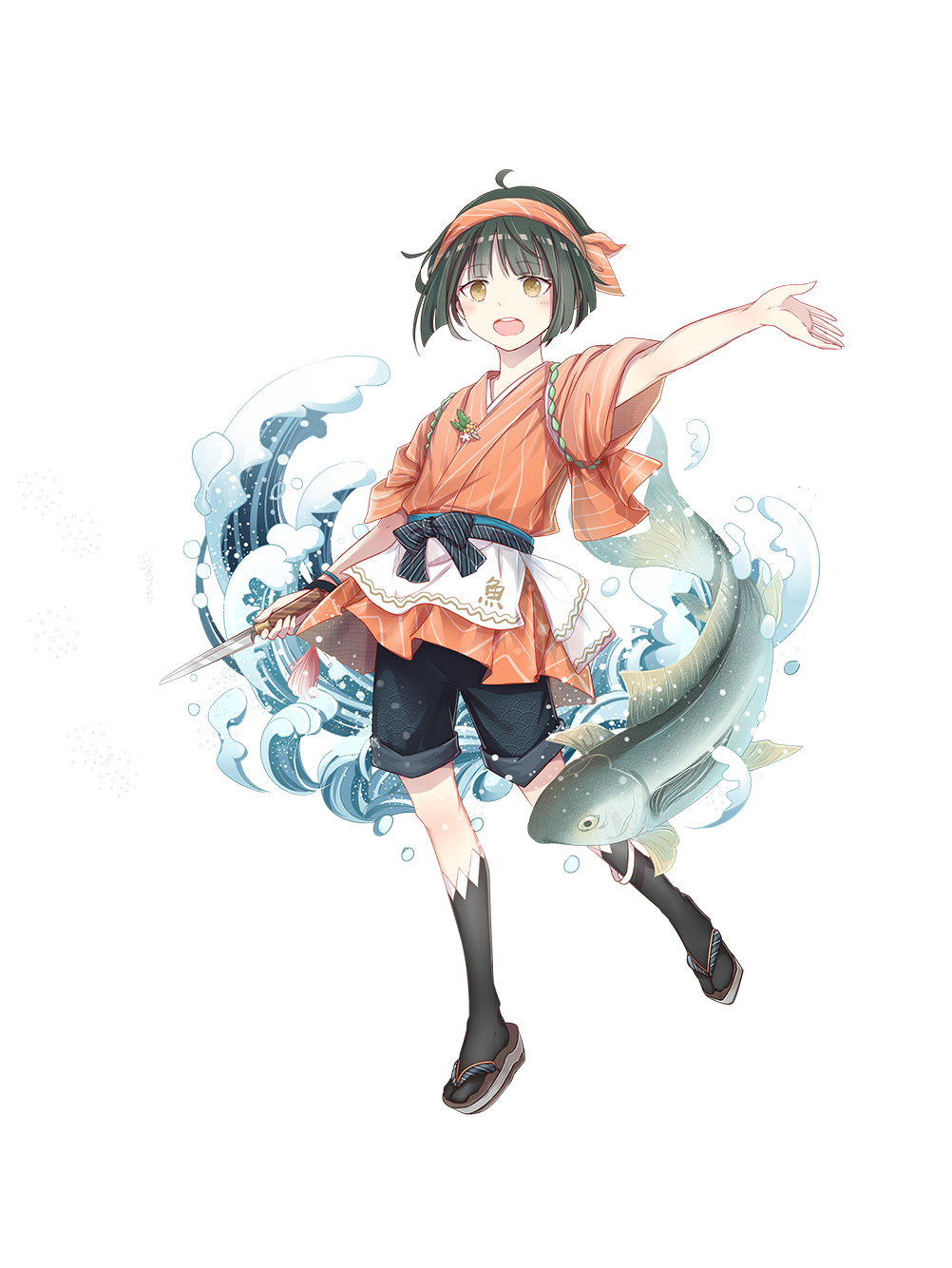 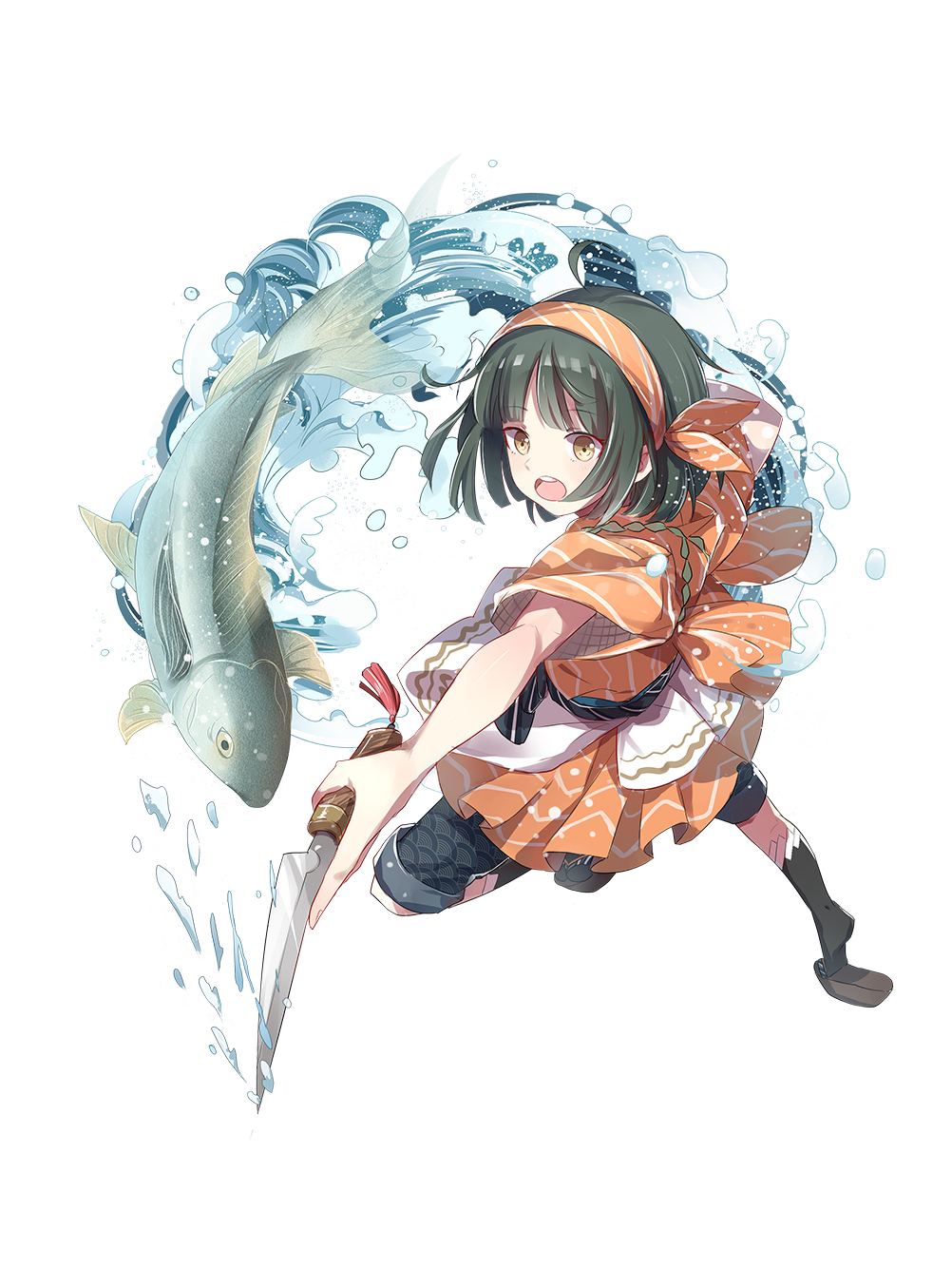 An optimistic young boy that can often be seen walking around with a giant smile on his face! He also likes to carry his fish around! His optimism is contagious and makes everyone happy!

The preparations of sashimi requires a very talented Chef with great knife skills! The slices must be thin and clean; chefs often spend years in training. 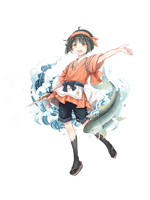 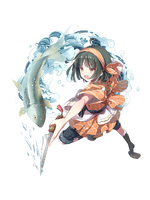 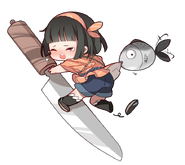 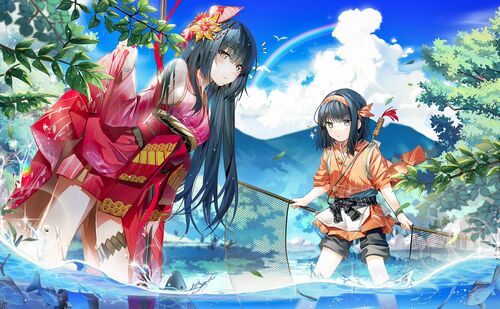 I. In Red Leaves

II. Why So Lost

I. In Red Leaves

My memories have always been of the sea. Sparkling, as if full of precious gems, it connects with the sky in an endless expanse of blue.

My sister and I were together with our Master Attendant for a long time there. But now my eyes were drinking in the beauty of the red maple leaves, redder than fire.

This is the Red Leaf Pavilion that took my sister and me in after the death of our Master Attendant.

"You shouldn't be so gloomy on such a crystal-clear morning." A soft, familiar voice came from behind me. "Your sister would worry about you if she saw you like this."

I looked back and saw Sukiyaki holding a bunch of vegetables. He was the owner of the pavilion.

"Here, let me give you a hand with those. Are these for Miss Ochazuke?"

Sukiyaki is always nice to everyone, I've never seen him lose his temper.

"I used to help the Master Attendant and other villagers move things all the time."

"You used to live in that seaside fishing village, didn't you?"

"Yes, the people there were really nice, they were always smiling and giving me fish to take home with me."

I realized that I started to talk too much.

"Sounds like you were happy there, why didn't you stay?"

I wasn't sure how to answer his question.

My heart leaped into my throat. I mean, if I told him what had really happened, I would have bored him to sleep. I had just been thinking how beautiful the world would be if it were really like what we see on the surface.

It would be so wonderful if everyone could smile to each other all the time. But no matter how hard anyone prayed, things would never change.

There are two sides to the world, and if there's a bright side there also has to be a dark side. The darkness has always existed, just like the Fallen Angel.

Since you can't change the world, you need to change yourself.

"I want to find something I can do. I want to help my sister, and everybody else." I said, thinking out-loud.

"You really are a great guy. Oh! We should be pals~"

II. Why So Lost

My sister came over carrying the katana she seemingly carried with her just about everywhere, and walked right in front of us. The katana scraped the ground with a dangerous sounding clang.

"It's not safe for a little girl to carry a katana."

Sushi used the sleeve of her kimono to cover her mouth and said, "I practice with it every day, but perhaps you don't know that."

My sister has a really candid personality, and she is very serious about everything, especially when it comes to me.

Sukiyaki did not say much about it, his face was alight with an unexpected smile.

"Yeah, okay." I replied, as Sukiyaki and I left my sister's presence.

I didn't know why, but things got real quiet all of a sudden. From the time we left the kitchen to the time we returned, Sukiyaki and I didn't say anything to each other.

"It seems that Sushi just doesn't have a brain."

In that moment I realized that I had never heard Sukiyaki speak in such a low voice. It was as if it wasn't him who was doing the talking.

"Sashimi, have you ever spoken your mind with Sushi?"

I lowered my head quietly.

"Never? You really get it kid."

Sukiyaki smiled as warmly as ever.

"That's easy to understand, but Sushi doesn't know? No... maybe that's not what it is all about. If you have something you want to achieve, there is a place I can recommend to you."

"Go there with me tomorrow."

I didn't know where the road led, I just walked at a leisurely pace through the maple forest with Sukiyaki.

The leaves reddened the world, adding a touch of warmth to the winter that would soon come.

Sukiyaki led me to a simple and quiet room. Several tatami mats were laying in the room, with several cups of hot tea sitting on a short table with wafting white smoke.

After saying this, Sukiyaki left.

Suddenly, a pink petal fluttered in through the window.

Huh? Could this be a cherry blossom? In autumn?

Just when I thought that, I turned to look out the window, and came face to face with a girl with big, curly golden locks who had jumped off the roof and run in through the window.

I didn't know why, but I suddenly stopped thinking, and even held my breath.

"Are you a new student?"

Suddenly, this girl, like the winds of spring, now stood before me.

I wasn't really sure what that word meant.

"This is the Birds-Nest Private School. This is a place where you can learn new things. The teacher will help you understand a lot." She said with the sweetest of smiles.

"Now Sensei, do you know what I can do?"

I was just about to ask that question when a pink-haired girl in a kimono suddenly came in from the roof of the house and said to the girl.

"Your brother is coming."

"He found me so soon?" The girl suddenly said nervously. "I've got to go, bye!"

The girl like the winds of spring actually left as fast as the wind.

"Dorayaki, what are you doing here?"

A soft monotone voice came from the outside of the room.

I couldn't hear clearly what Dorayaki was saying, I pretty much just knew he liked to play the game Catch the Ghost with his younger sister.

Kids today are so full of life nowadays.┘

I could also hear Sukiyaki’s voice as well.

That frigid mono tone mixed with the sound of a cat’s meow, which warmed me up a little bit.

I looked up and saw a young man in a blue haori holding a cat in his arms and a katana by his side.

What a strange fellow.

Was exactly what I was thinking at that moment.

“Hello Sensei, I am Saury.”

The girl calling me Sensei in this short introduction must have been a food soul.

“Sensei, do you have any questions?” What questions will the teacher ask me?

As it turns out, he did not sit and discuss the great meaning behind the scriptures as I had imagined he would.

He just gently petted the cat in his arms, and asked,

“What kind of existence do you expect to have?┘

My heart was suddenly shaken, and those words echoed in my mind countless times. But there was only ever the one answer.

“I want to protect the smiles of the important people I love.”

Saury looked at me expressionlessly, and Sukiyaki, who sat there fanning herself after entering the room, said nothing.

“This place can teach you how to protect the important things in your life with the sword.”

“And we also can teach you to treat the things you value the most with the utmost care.”

Saury said while stroking with the cat.

Just at this moment, I could hear the sound of other cats.

“It’s just the way this place is.”

He couldn’t help raising his voice.

I was shocked, but responded immediately.

We welcome you here any time.”

Saury left with the group of cats that had gradually wandered in.

“So what do you think of this place?”

Sukiyaki asked after coming straight to me.

I said to Sukiyaki with a laugh

Though the teacher was a bit quirky and not very talkative, for some reason he makes you respect him.

After this we left.

The next time I went there, the sakuras were in full bloom

And the spring breeze carried the aroma of flowers from the trees.

The way I remembered my encounter with Sashimi was, one stretch of sea and two people.

One was the first to see a fisherman when he was summoned into the world, the other was his elder sister Sushi who had depended on him for her whole life.

But after just a few years of Sashimi thinking of fisherman as a father, he cast out on a fishing trip and never returned.

Sashimi and Sushi did not stay put, they went out to find the whereabouts of the fisherman.

They rambled across the land for a long time and went to many countries.

Finally, they came to a small island with a beautiful coast.

He met different kinds of people at the fishing village.

The affable people there saw this poor brother and sister, alone and helpless, and invited then into their homes.

Sashimi would also go to help the fishermen who lived in the village.

He would make some fish dishes for them, and help the fishermen who lived in the village. Sashimi would also go out fishing with the fishermen in the town, and be given a fish for his hard work.

Sashimi would often walk around the lanes and alleyways of the village with fish in his hands.

Whenever he saw someone in need of help he would generously lend a helping hand. He didn’t expect any reward, he just liked seeing smiley happy faces.

At which time he would also flash a big pearly smile.

As long as we can smile, things won’t be as big as we imagine.

But, life was not as peaceful as he would have liked.

Because of his adorable looks and innocent approachability, he was often bullied by the neighborhood children.

Whenever this happened, his elder sister Sushi was always the first one to stand up for him, and most of Sushi’s own injuries resulted from sticking up for her brother.

And the only thing Sashimi could do for his sister was to smile and answer that he was fine.

Because only then would his usually tough and serious sister flash a rare smile.

After a short while, a couple suddenly appeared in front of Sashimi and Sushi.

They also relied on fishing for their livelihood, just like other fishermen.

The couple did not have children. The moment they lied eyes on Sushi and Sashimi, they said they wanted to take care of them as their own.