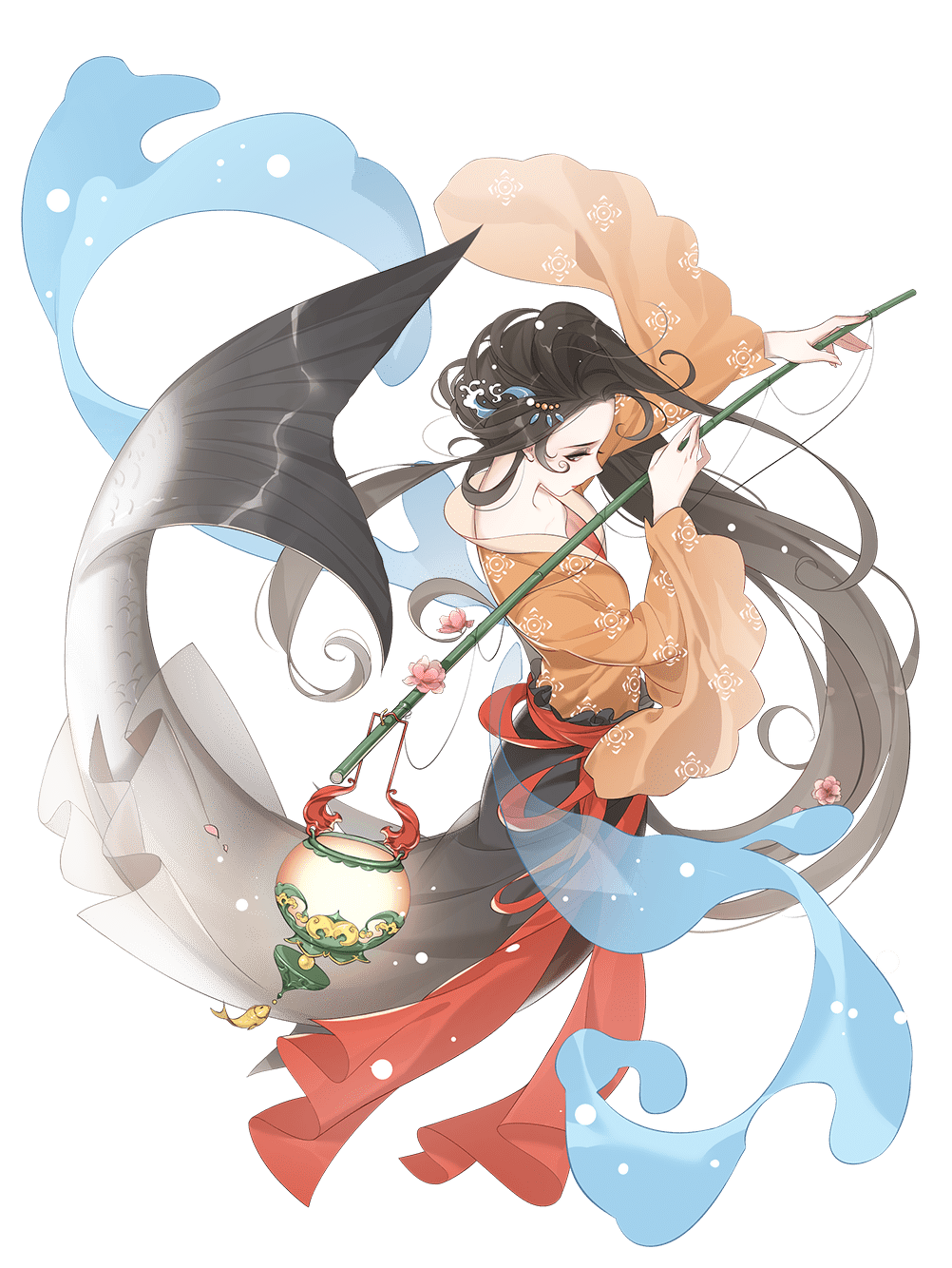 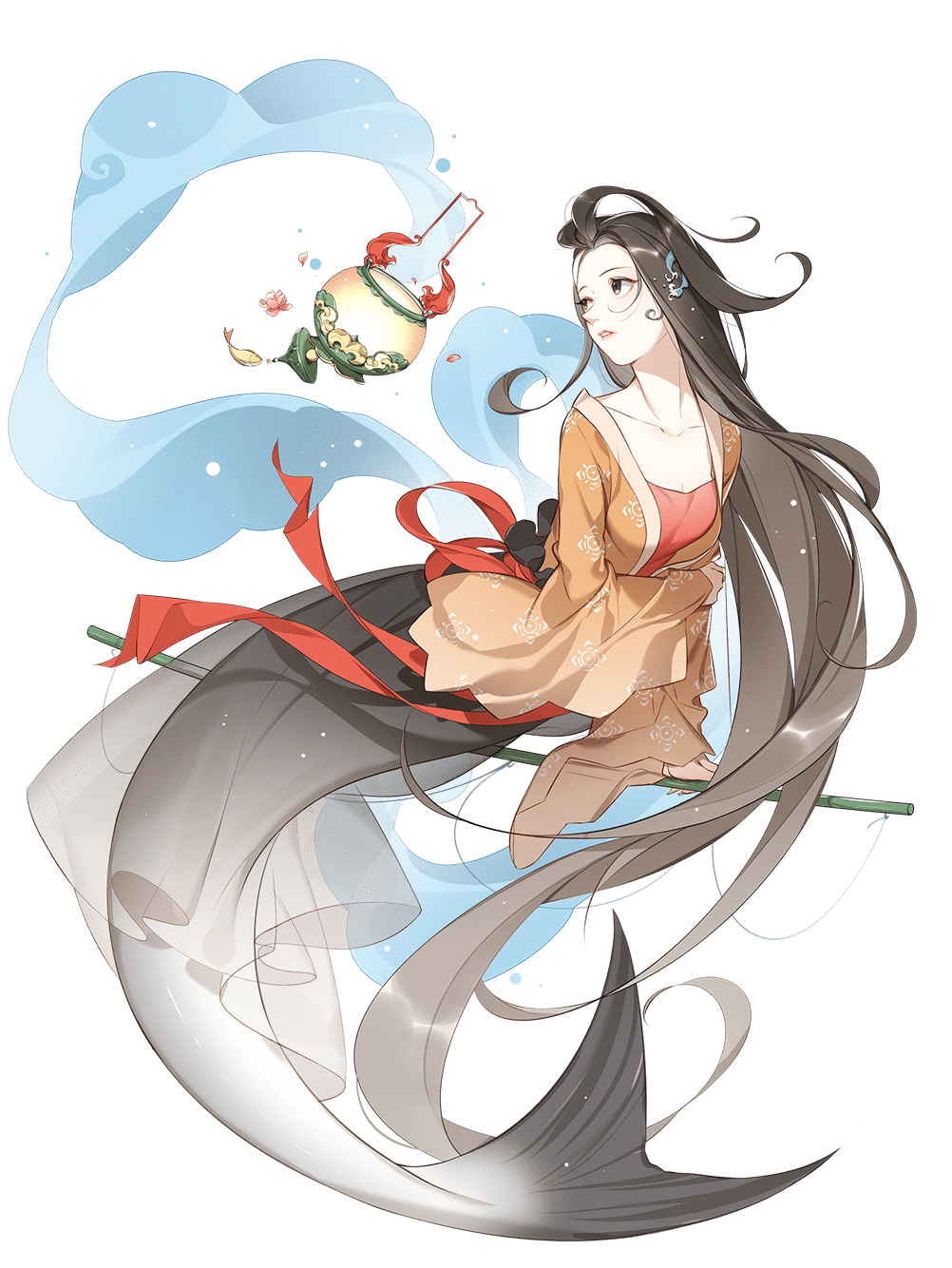 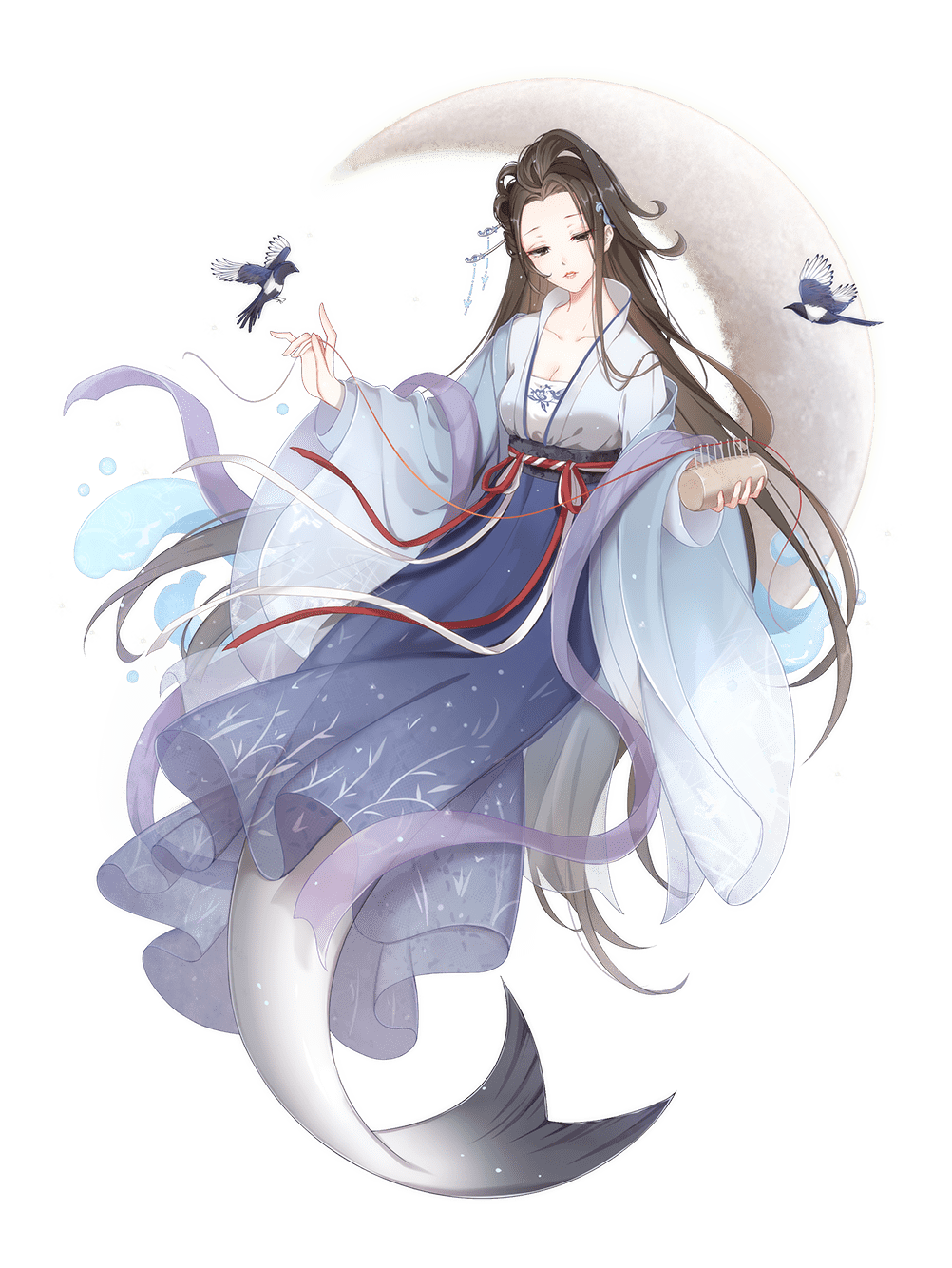 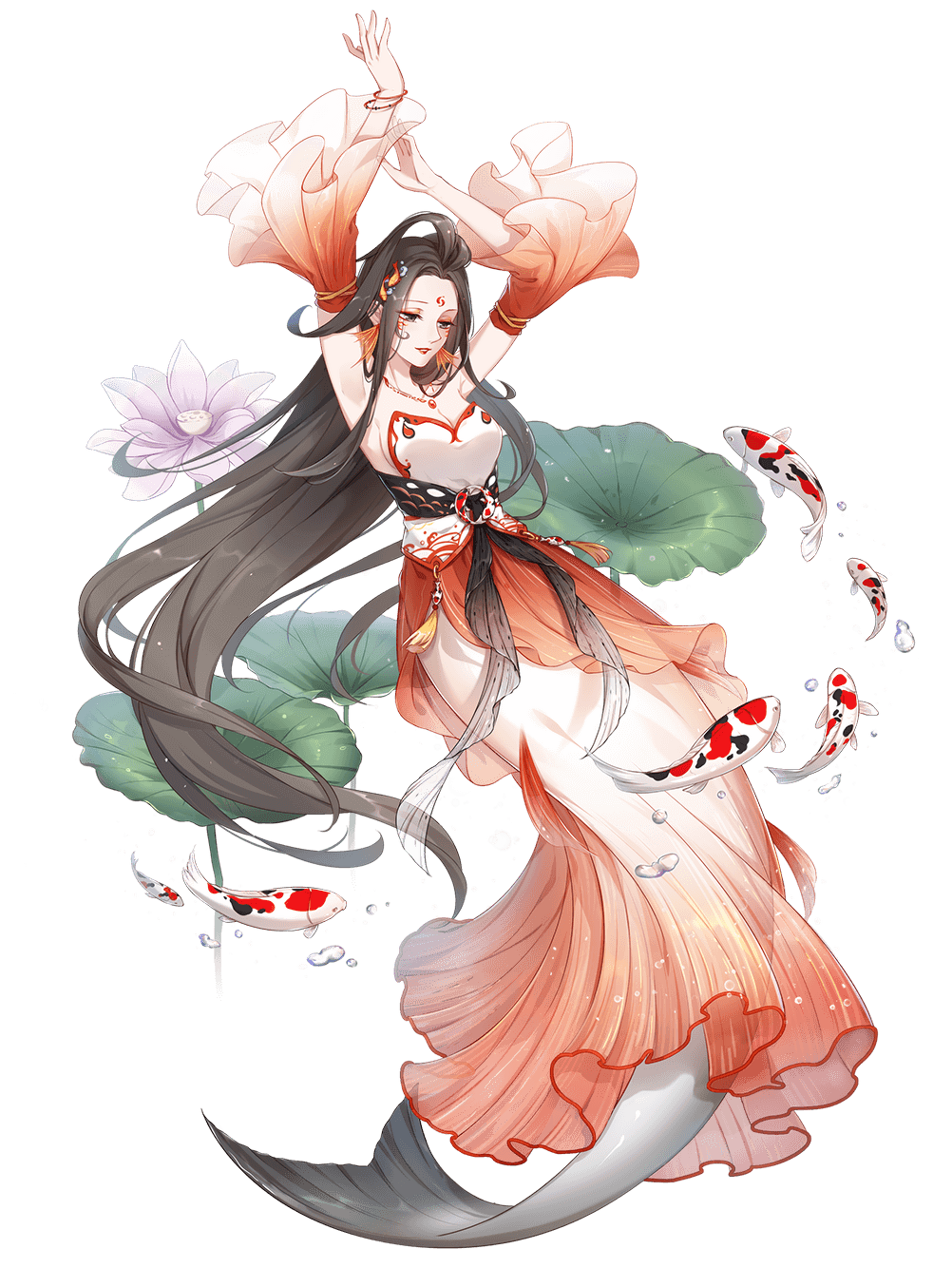 She is gentle and melancholic. She seems to be waiting for the right person to bring her happiness. Perhaps a certain Master Attendant may be able to make her happy again.

Sweet and Sour Fish is a recipe from China that combines the juicy and tender meat of the fish with a savory and delicious sweet and sour sauce. 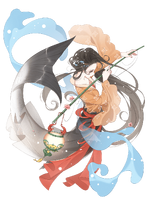 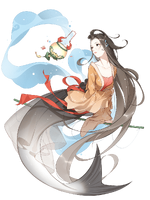 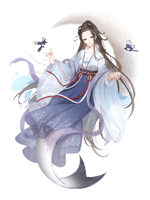 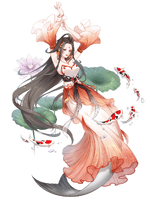 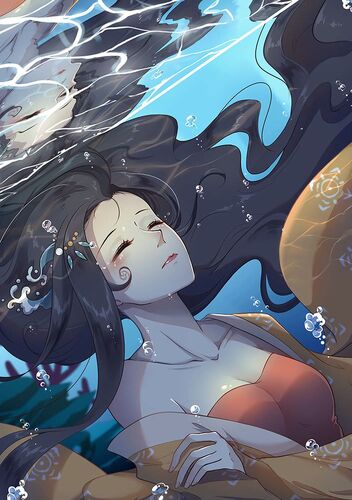 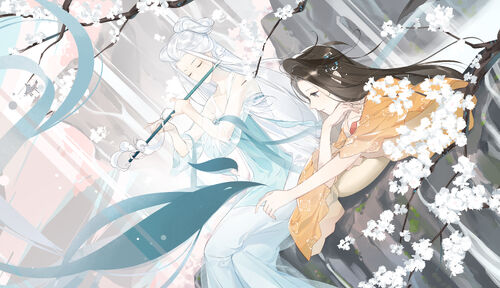 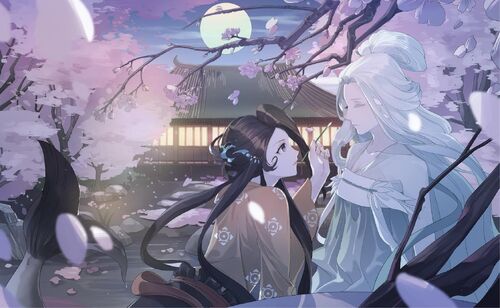 Other illustration with Cloud Tea

I. The Heart’s Troubles

I. The Heart’s Troubles

I can feel my body gradually sinking, and the light from the lake’s surface was getting farther and farther away.

Just like this, it was as if it was okay to close my eyes and fall into a deep sleep.

Forgetting the sorrow, and be together with your lost loved one; letting everything merge and fuse into this lake.

Regardless, I have already lost everything.

No... It was hopeless since the beginning.

That night’s little starlight fireflies, and bashful smile that was engraved into the bottom of my heart.

It was nothing more than a beautiful illusion I saw during that summer.

But it was always hard to suppress the sorrow in my heart. Every moment since that day, it always repeatedly questioned me in my heart:

“Why are you still alive in this world?”

That is right ah, why?

I also want to go back to that time and ask that person. From when I choose to drink the bowl of medicine to now, why can I still breath? Why is it that I can still feel sorrow?

Why, is it unable to fulfill my heart’s desire?

However, I will never be able to obtain the answer.

Because I will never be able to meet with that person again in this lifetime.

The me at the time was saddened by Master Attendant’s death. A human’s lifespan was truly too brief, for me it was merely a fleeting moment, but he has already lived a lifetime’s worth.

I was not willing to stay in Master Attendant’s hometown, therefore, I followed along the water, wandering all the way to a far-off and remote place.

After going through a dense forest, there was a lake deep in its center. The lake was silent throughout that night. The moonlight shone down, causing the lake’s surface to glisten, together with the glowing fireflies on the shore, it eased my sad-laden heart.

Thus, I closed my eyes, and could not help but sing the song Master Attendant loved when he was alive.

However, when I opened my eyes after the song finished, I found someone standing at the shore.

It was a human man, who looking at me with an astonished yet pleasantly surprised expression.

For a time, I did not know how to react and we unexpectedly end up blankly staring at each without moving.

A long while, after I managed to gather myself, and wanted to dive back into the water and leave, a stuttering voice came from the lakeside. I looked up and saw that he was bashfully smiling, his tone weak, but full of expectations:

“From now on, can I come here more often?”

Perhaps it was because I have been alone for too long, but after feeling warmth from that brief moment, I inexplicably nodded in agreement.

Or perhaps, it was that his bashful smile reflected under the summer sky, looked especially beautiful.

“She has a fish tail, it’s really dreadful.”

“To think there was also such a monster among the Food Souls.”

“But it seems her singing is really beautiful ah?”

“Don’t be stupid, it must be a trap used to confuse others.”

“I say it’s better if we stay away from her.”

The hateful human words from the past would always haunt me in the middle of the night, however, these nights, those unpleasant voices have already not appeared for several days because of his company.

That man would come everyday to the lake where I was staying at in the middle of the night and tell me some amusing stories about him and others or interesting things that happened in the forest. As time passed, I began to look forward to what amusing stories he would come tell me that day.

However, just as I absentmindedly thought that it was not possible to forever stay in this lake, he suddenly disappeared.

It was as if he had never existed.

Humans originally were always creatures that come and go, or so I comforted myself.

But it could also be that there was nothing more to tell, thus he simply did not come. Since there was no reason to stay here anymore, why not continue to travel, and leave for a new place?

So I thought like this, comforting myself again and again, but I found that no matter what kind of reasoning I used, it seemed that I could not convince myself to believe that that person was truly tired of me.

As the fireflies glowed, I looked towards the lakeside where he would usually stay by, and made a decision.

Rely on the little bits he told me before and figuring out by those vague clues, I went through the forest and found the village he lived at. It was late into the night, and the village was at a still silent. Only one family’s house still had a flickering candlelight.

There was arguing voices that escaped out the house from time to time, among it was a voice I was very familiar with. I went towards the source, expecting to see his figure inside the house.

His brows was tightly knitted, facing who seems to be his mother that was arguing with him about something. The wall separating us muffled their voices, I could not make out the details, and could only vaguely distinguish some words that appears to be talking about me.

I stood outside the house, but my mind already blanked out. The heart that once palpitated in unease gradually calmed down. After taking a deep breath, I turned and left.

Ever since that day, he returned to how he was before, and would come on time everyday to chat with me. Using the reason that he had a cold and could not come, he brushed off his absence of the past days.

I never exposed his lie, knowing that the day was advent.

That day, he uncharacteristically came to the lake in the evening, holding a bowl of medicine in his hands, saying that I have stayed in the water for a long time and was afraid that I would catch a cold like he did. Saying that these days he had specially went into the forest to pick herbs, hoping it would help prevent me from catching a cold.

I took the bowl of medicine and kept silent. Looking at my reflection in the bowl, I suddenly felt that this me was unfamiliar.

He saw that I did not speak and started to panic. When he opened his mouth about to say something again, I raised the bowl, and drank everything.

My throat suddenly felt like it was being burned by fire, and my vision in front of me started to distort. His face was warped and blurred in disarray, turning indistinct.

My whole body began to lose its strength, and the medicine bowl slipped from my hands, plunging into the lake.

This was what my heart thought.

Somewhere within a dense forest in the Light Kingdom, there was a small village isolated from the world.

The people of that village lived in peace and work happily, did not strive for the secular world, and lived a happy life that solely belonged to them.

However, among them was one that was bit particular. The Madame of this family had taken her child with her when she traveled outside in her earlier years.

While passing a stream somewhere, they had encounter a Fallen Angel.

When they were scared and bewildered at what to do, a Cooking Attendant rescued them. The Cooking Attendant and their Food Soul working together to defeat the appearance of a strong enemy had left a deep impression in the child who was only six years old that year.

After they returned to the village, the child also became a Cooking Attendant and painstakingly trained. However, there were times when only effort would not give one the results they seek. The child’s cooking skills grew day by day, but the child was not able to summon a Food Soul.

“Perhaps the child has no talent for it.”

Within the village, gossipers started to talk.

The child of that year has now grew up to be an adult man.

The passion from the originally pure worship of Cooking Attendants gradually changed into paranoia.

Just as when he was at his wits' end, he accidentally heard a beautiful singing voice inside the forest one night. The singing attracted his complete attention, letting him be unable to help but head towards the source of the singing.

There, he saw a mermaid that would have only existed inside the fairytale books of his childhood.

At the same time, he immediately reacted. Perhaps he could finally achieve his dreams.

Everyday since then, he would come to the lakeside at the same time, everyday changing his approach to get the mermaid’s favor.

However, among his conversations with the mermaid, he founded that his original purpose in the beginning started to waver.

From being said to have a ‘cursed singing voice’ by humans and be called a ‘monster’ among the Food Souls, to her lonely and melancholy heart from the long years; one does not know when it had started, but he began to care for her.

It was not until the mermaid was holding the medicine bowl, and let her tears fall before him did finally understood his own feelings.

Hence he threw away his original plans. He left the mermaid who was unconscious from the drug at the lake, turned around, and left.

After giving up of the dream that was at his fingertips, the man felt much lighter, much more free than any time before. Like this, the paranoia accumulated over the years was let go.

He thought to himself; even if he could not summon a Food Soul by his own powers in this lifetime, it does not matter.

Because had he obtained something much more important than his dream.

However, Sweet and Sour Fish who had woken up misunderstood the other’s meaning. After discovering the her throat was damaged by the man’s drug, the loneliness and sorrow of many years permeated her heart.

At this time, she had lost even her beloved voice. That every moment, she felt that there was no meaning in continuing to live.

There is no need for whoever tied the bell to undo the bell; it is not necessarily needed for whoever started the problem to solve the problem. Sweet and Sour Fish’s knots in her heart will one day, finally be undone in the future.

By the melodious flute in the spring days ahead.