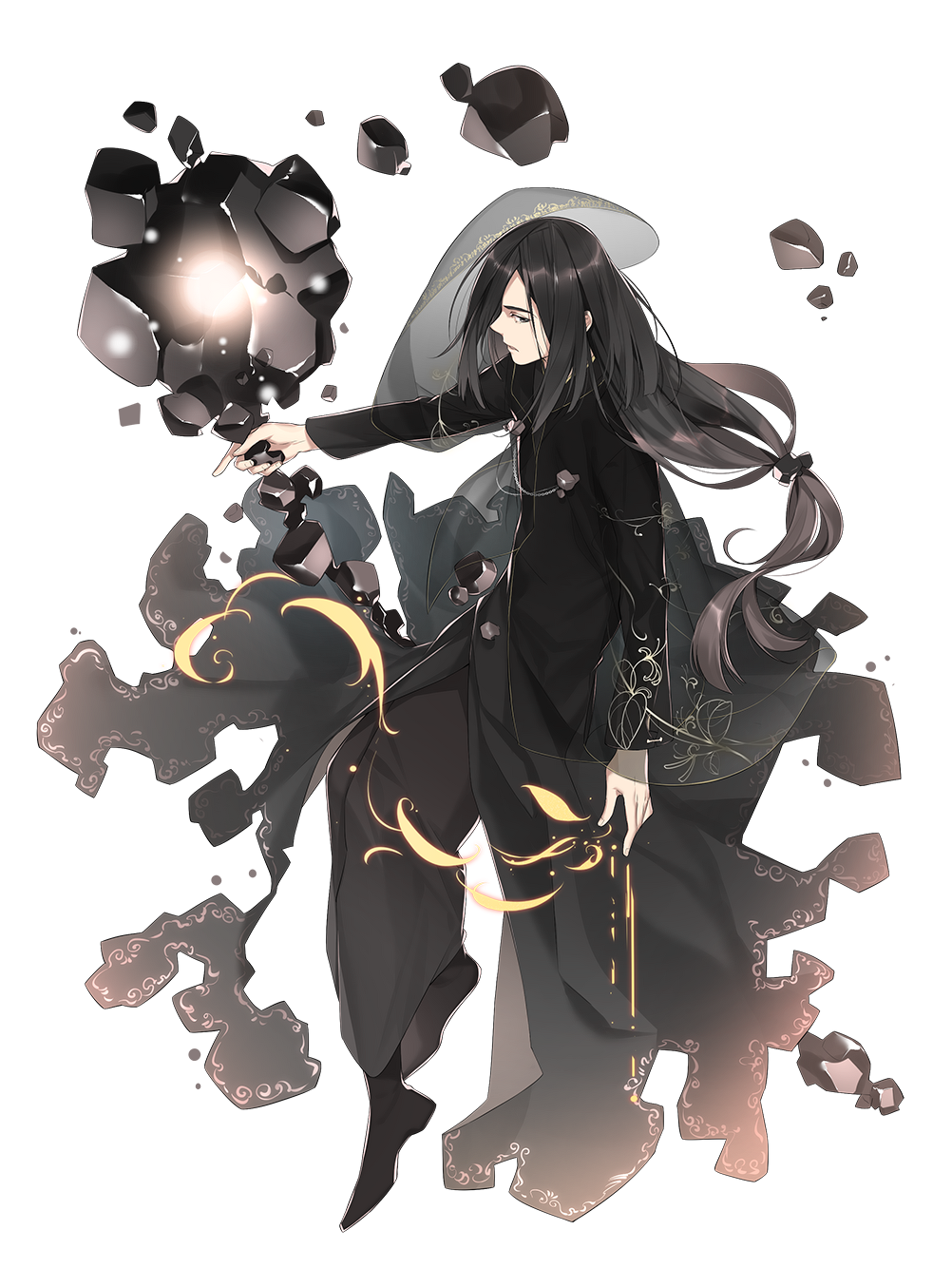 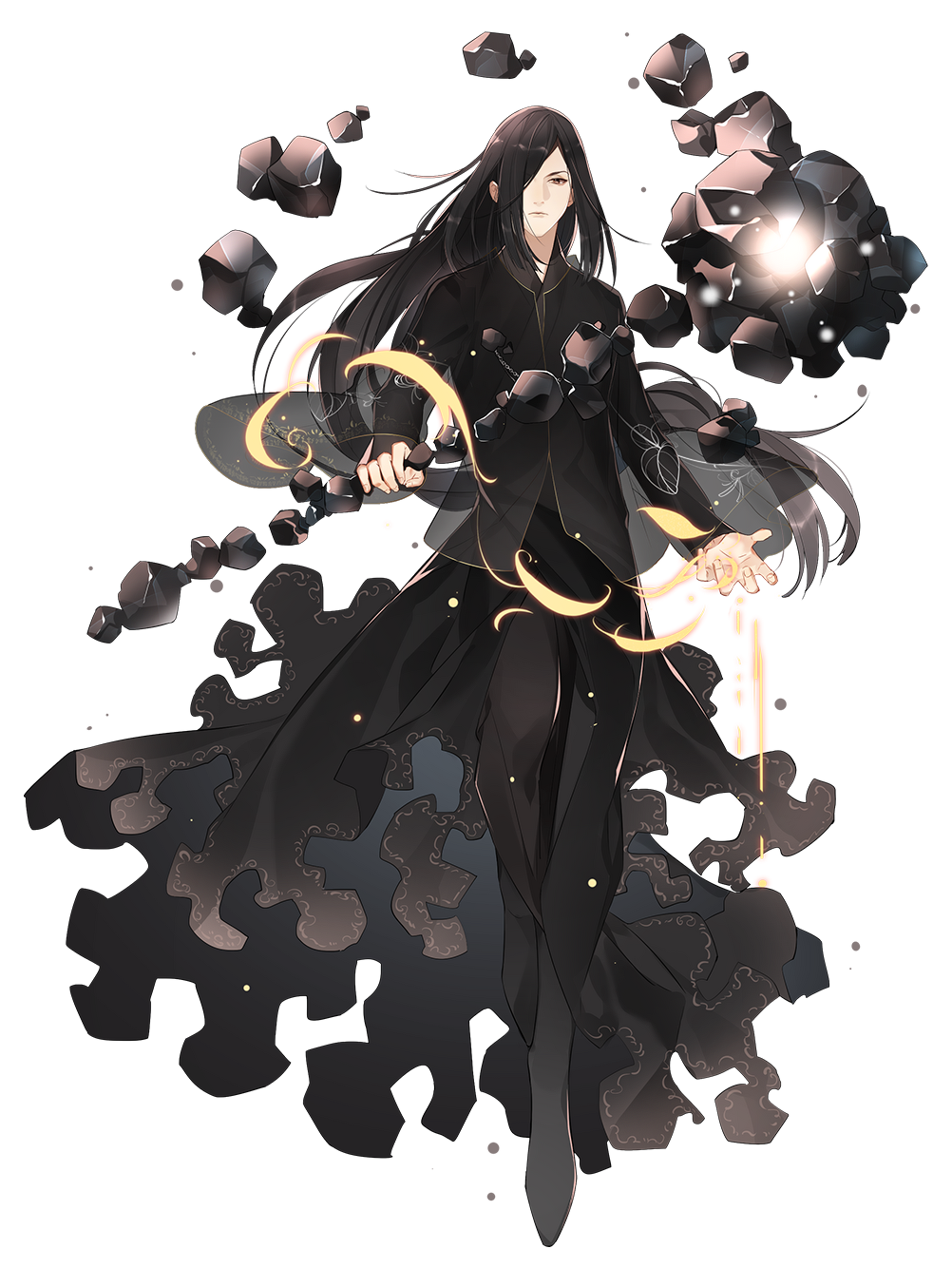 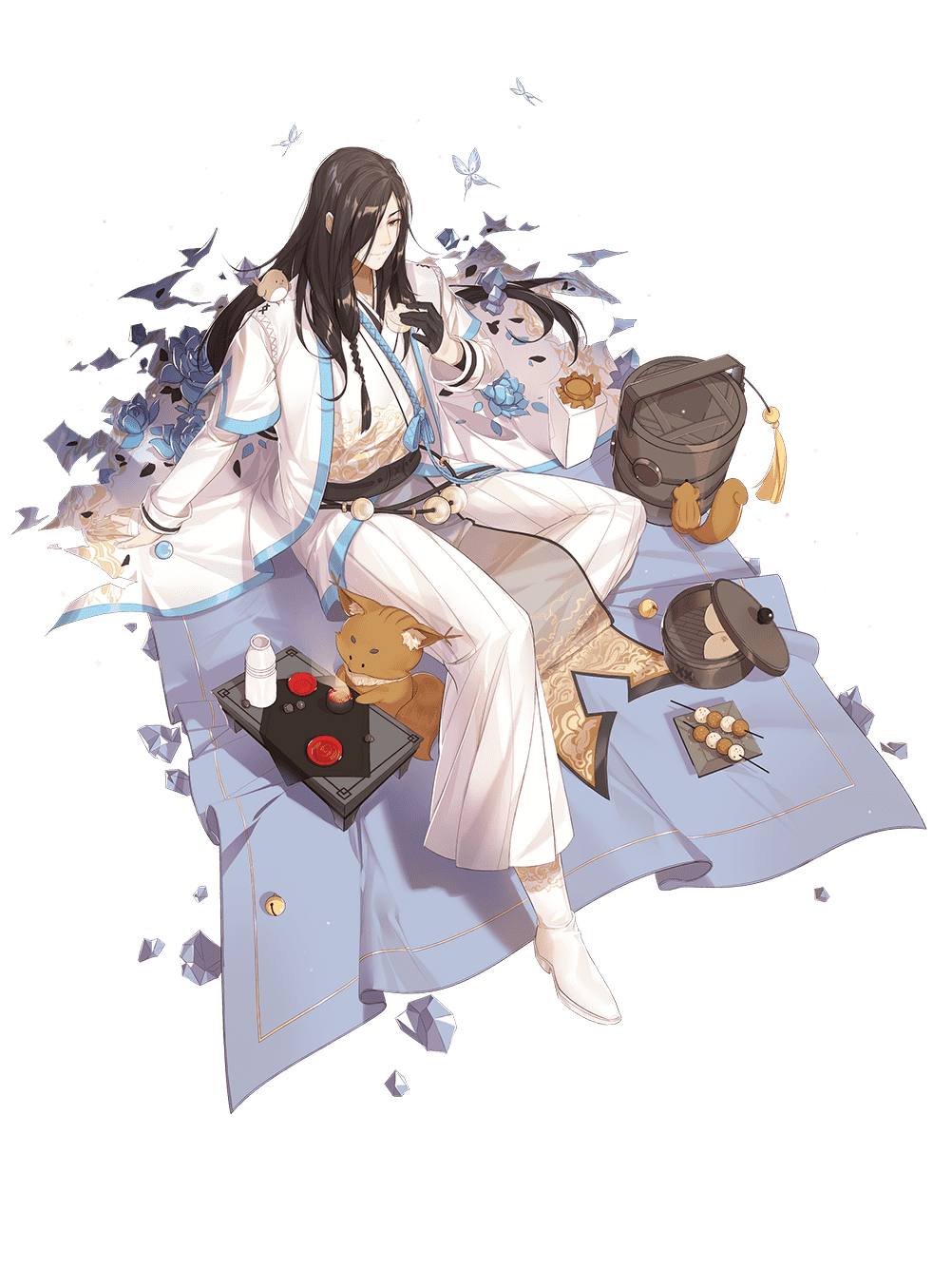 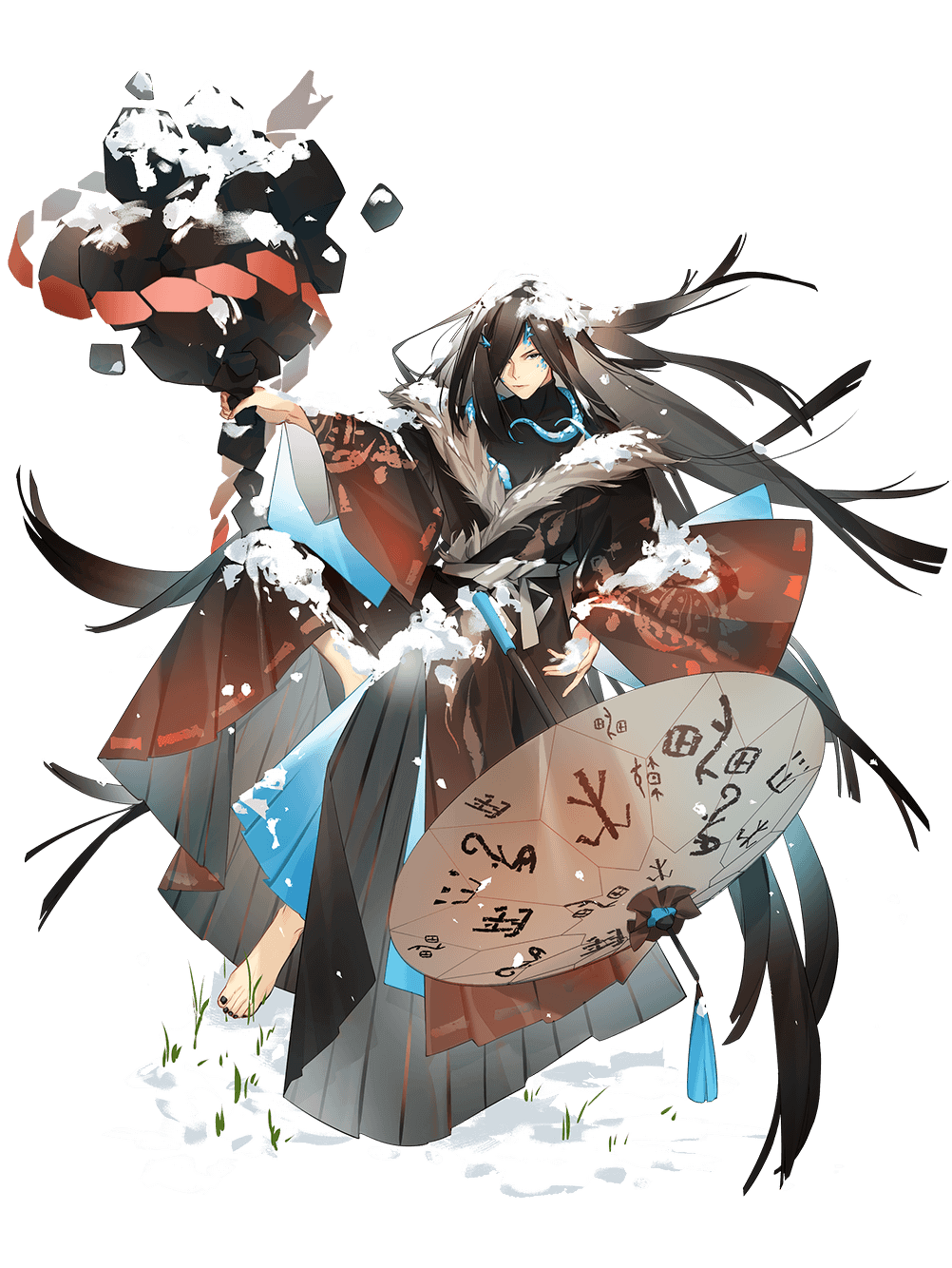 A hard-nosed teacher who prefers not to help others but can't resist himself. He'll often find himself in situations that could have been avoided had he just walked away.

Tortoise Jelly is a type of delicacy in China. Although it is considered a dessert, it has medicinal properties and can help lower body heat. 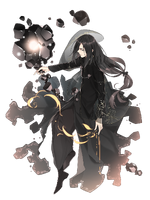 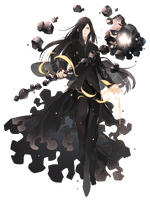 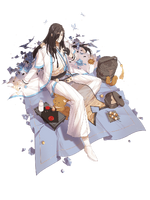 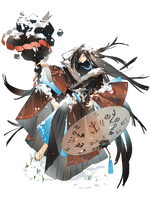 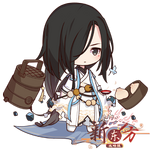 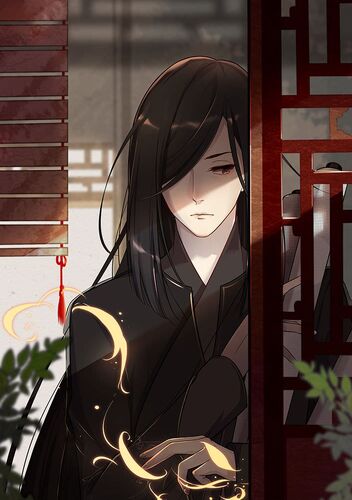 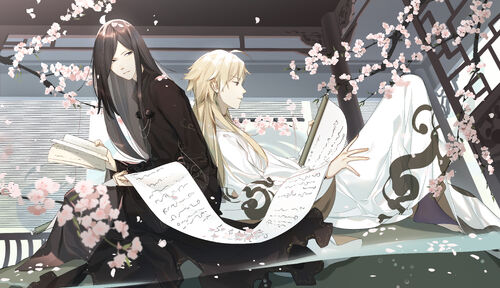 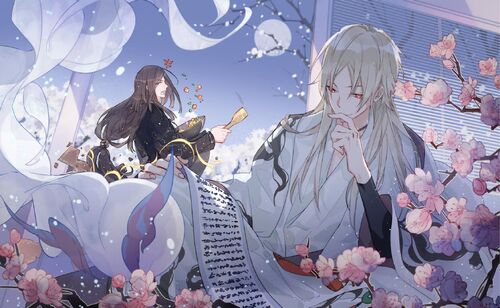 Other illustration with Wonton

When Master Attendant passed away, she was only five.

Her small silhouette stood in front of her mother's grave, staring vacantly on the name inscribed on the tombstone. I thought, such a young child would not know of an eternal separation with a loved one, where one was in heaven and another still on earth.

Yet, at the very next moment, I caught a glimpse of tears washing that young and tender face completely.

When Master Attendant passed away, I was behind her.

With her fragile human body, she received an unreserved, mighty blow from a Fallen Angel. The Fallen Angel's weapon pierced through her stomach. The fresh blood that spurted out had splattered on my black robe.

Everything happened too abruptly. The Fallen Angel, that should have already been defeated by us, had delivered a heavy, painful strike at us before its last breath.

It was my oversight.

I reached my hand out and pressed on her wound, hoping that the fresh blood that was gushing out would stop. However, she held my hand to stop me. It was as if the gaze that was directed at me was telling me that there was already no point in doing anything.

I could feel the power behind the Contract between us gradually slipping away.

If only I did not let my guard down so early...

If only I could move to protect her from the front...

Suddenly, I felt a gentle touch on my hand that tugged my thoughts back from sadness.

I looked down and there was a small hand within my palm.

Tears hung upon the face of the tiny hand's owner. She inhaled, and raised her head to stare at me.

I looked at this small person, whose face was similar to Master Attendant's, and could not help but to grasp her hand.

That day, I decided that even without the presence of the Contract, I would also stay by her side to accompany her until the end of her human life.

Taking care of a child was not an easy task.

I always worry that I would accidentally let her thin and small body get hurt. A child's meal would surely differ greatly from an adult's. I thought that a girl like her, who was only five years old, would not consume the same thing as a grown human.

So on occasions when she was sound asleep, I would always head to the town, where humans reside, to ask about matters regarding raising a child. Some kind women would explain it warmly, but there were also some women that would scrutinize me with mocking stares.

But I did not mind them. Regardless of how they perceived me, it would suffice me to attend to my own things.

Although I would always return before she woke up, sometimes, she would be up early.

When she realized that I was not around, she would not cry or cause a fuss like other children, but sit quietly in the house. When I entered through the door, she would smile at me:

Just like this, the days passed. It was as if there was an intangible, tacit understanding between the small human and me. From that moment onwards, the painful incident was never mentioned again. Other than the time when we paid respects at her mother's grave every year, I could no longer see any sadness on her face.

It seemed that she had grown much taller than her previous height.

She started to shed her childlike features from her face and gained the appearance of a woman.

Occasionally, I would see a young man smiling bashfully as he spoke to her. I did not know what they were talking about.

When she stood before me, I was dazed. It was as if I saw my Master Attendant in her past.

Before my eyes, her reddened face was swollen with anger. Restlessness and uneasiness stirred my heart as I argued with her.

I did not want her to follow the footsteps of Master Attendant to the front lines of the resistance against the Fallen Angels. I did not want to experience the excruciating pain from before again. Despite that, the girl, who had been obedient all along, had opposed me vehemently on this matter.

"I want to avenge my mother. I did not want to hide at such a peaceful and comfortable place like you!"

After she had spoken, she turned around and ran out of the house. I stared at her silhouette. The young, small figure, whose footsteps were clearly unsteady, in my memory had already vanished completely.

In the end, she still chose to head down the same path as her mother.

And followed her to the place where her silhouette disappeared to.

As I could not persuade her to let go of the resolution that she clung so strongly to, after I caught up to her, I no longer objected to her ambition of becoming a Cooking Attendant.

And if she required me, I could draw up a stipulation that was similar to the Contract.

"I do not need your sympathy."

"I will summon my own Food Soul."

Upon her insistence, I did not say anything more and allowed her to do what she wanted.

Things did not happen as smoothly as expected.

She had inherited her mother's Cooking Attendant blood, which was infused with immense power, and yet, she could not even summon a Food Soul. The reality had given her a heavy blow.

Why did it turn out this way?

I could sense an abundance of magic within her body, but it was as if this magic was sealed so she was unable to use it at all.

I could not help but feel that my Master Attendant was preventing her from walking down that road from the unseen world of spirits.

She was unwilling to give up.

That stubborn personality was extremely similar to her mother. She started to practice relentlessly every day, so that she could find a breakthrough that would allow her to use the magic.

But the arduous daily practice did not bring her any hope. After these kind of days continued for a period of time, she became slightly withdrawn when she was at home.

I did not know how to console her in this situation to make her feel a bit better.

So I resigned myself to taking care of her daily life and not voice my concerns to her.

I thought, since she had chosen to not ask me for help, she must had her own judgement.

After a certain amount of years, I would always think, if at that time, I could be more communicative with her before that incident occurred, and ask about her thoughts-

Would that ending be slightly different?

During the years where Fallen Angels were rampantly causing harm to others, the number of humans that met their death was countless.

One of them was a Cooking Attendant, who summoned Tortoise Jelly.

She was a young lady, whose husband perished in the war earlier than her. She had only one young daughter and they relied on each other for survival.

It was unfortunate that in the end, she also left her small daughter behind and departed from the mortal world first.

Tortoise Jelly had considered himself entirely responsible for his Master Attendant's death so he cared for her daughter as she matured into an adult. He had deemed it as this duty. It was also a way to alleviate his guilt by compensating her.

The girl grew up with time. Tortoise Jelly could not help but breathe a sigh of relief, as he looked at the face that was becoming more and more similar to his Master Attendant.

Just as he believed that they could live the days peacefully-

In the end, the headstrong girl, who wanted to be a Cooking Attendant like her mother, but was not able to summon a Food Soul, had chosen to risk herself out of desperation.

Tortoise Jelly had reached the forest one step too late. He watched how a girl, who had lived with him for 18 years, die in front of him. Just like her mother.

He had lost everything. Wandering aimlessly around the forest with nothing that would hold him back, the enormous surge of feelings, that caused magic to emanate from his body, had pervaded every corner of the forest. It attracted a steady flow of Fallen Angels to his side.

He welcomed them, as if he was planning to kill every single Fallen Angel in the forest.

Although he managed to walk out of the forest after that, his body was severely injured.

His thoughts was in disarray. He chose not to return to the village inhabited by humans, but to continue walking forward.

Without realizing it, he arrived at a peach blossoms forest. Finally, he fainted in the middle of the forest from fatigue.

Before he lost his consciousness, the girl's murmur before her death still lingered at his ear.